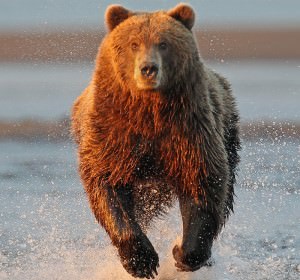 After a week in Lake Clark National Park, Alaska, I can safely say that this is one of my favorite places on earth. The natural beauty, majestic mountain peaks and volcanoes combine for some of the most stunning backdrops for nature and landscape photography one could ever hope for.

We had a very large workshop group at eleven people and it was going to be a challenge to make sure we got ourselves set up in the right place at the right time for photographing the powerful and beautiful Alaskan Brown Bear also known as Grizzly Bears. The first thing I want to tell you about is how wonderfully accommodating the owners and staff was at Silver Salmon Creek Lodge. They were organized, extremely flexible to the weather and shooting times and also very knowledgeable about the bear behavior in the area.

Our first day was full of not very nice weather wise and we were delayed a few hours from high winds and rain. The smaller Cessna aircrafts can’t fly safely in these conditions so we had to wait it out. We ended up getting in later in the afternoon and the rain was still falling heavily so we unpacked, had an orientation with the lodge owner, David Coray. After our orientation was done we were treated to a wonderful dinner of fresh halibut, I can tell you the food here is just fantastic! We were hoping for the weather to clear that evening but instead it was raining steadily. We went out anyways and saw our first Alaskan Brown Bears after only 10 minutes of waiting. The conditions were next to impossible but we did manage some interesting shots regardless, sometimes rain can add another dimension to your images, so don’t be afraid to shoot in bad weather!

Day two was much of the same, with lots of rain and some damp but determined photographers. We had several guests on the workshop from South Africa and this weather was quite a rude welcoming for people use to so much sun and heat. Despite the rain, we still saw some bears and everyone worked hard with high ISO’s and lots of numb fingers. Sometimes in nature photography you just have to pay the price of cold, windy, rainy weather to get the shot.

Day three finally saw a bit of a break in the rain but we still had some seriously dark and overcast skies. By the afternoon, the cloud cover began to break up and we were greeted with our first good shooting light. We took advantage of the new found light and shot right until sunset. Finally we were all smiling with some great bear images and things were looking good for the next 3 days.

On day four, half of our group went to visit an island about a one half hour boat ride from the lodge. There we were hoping to get a chance to photograph some of the last resident Horned Puffins and maybe some Common Murres. When we landed on the island, we were very happy to see that some Horned Puffins were still flying around bringing food to their dens from Cook’s Inlet. We all managed some pretty good shots of these wonderfully colorful and animated birds flying with their fresh catch firmly in their beaks.

Day five saw lots of nice light and we were all thrilled when we had the good fortune to photograph Brown Bears charging around the river mouth trying to catch the tail end of the salmon run. Everyone got some great action shots and we even photographed one bear busily digging for and eating Razor Clams during the low tide. On day six we had a mix of sun, wind, cloud and rain. It was still lots of fun and we managed to find a mother and cub grazing in a nearby sedge grass field for some intimate close up images.

The mom and her cubs were really not bothered at all by our presence as they went about their business quite nonchalantly. It was a pleasure and a thrill to be so close to these beautiful creatures as they fed in and amongst the grasses.

After a bit of a shaky start, the week finished well and everyone went home with some great images and memories of beautiful Lake Clark National Park and Silver salmon Creek Lodge.