A 360-Degree Tour of Ansel Adams, the Photographer That Broke All the Rules 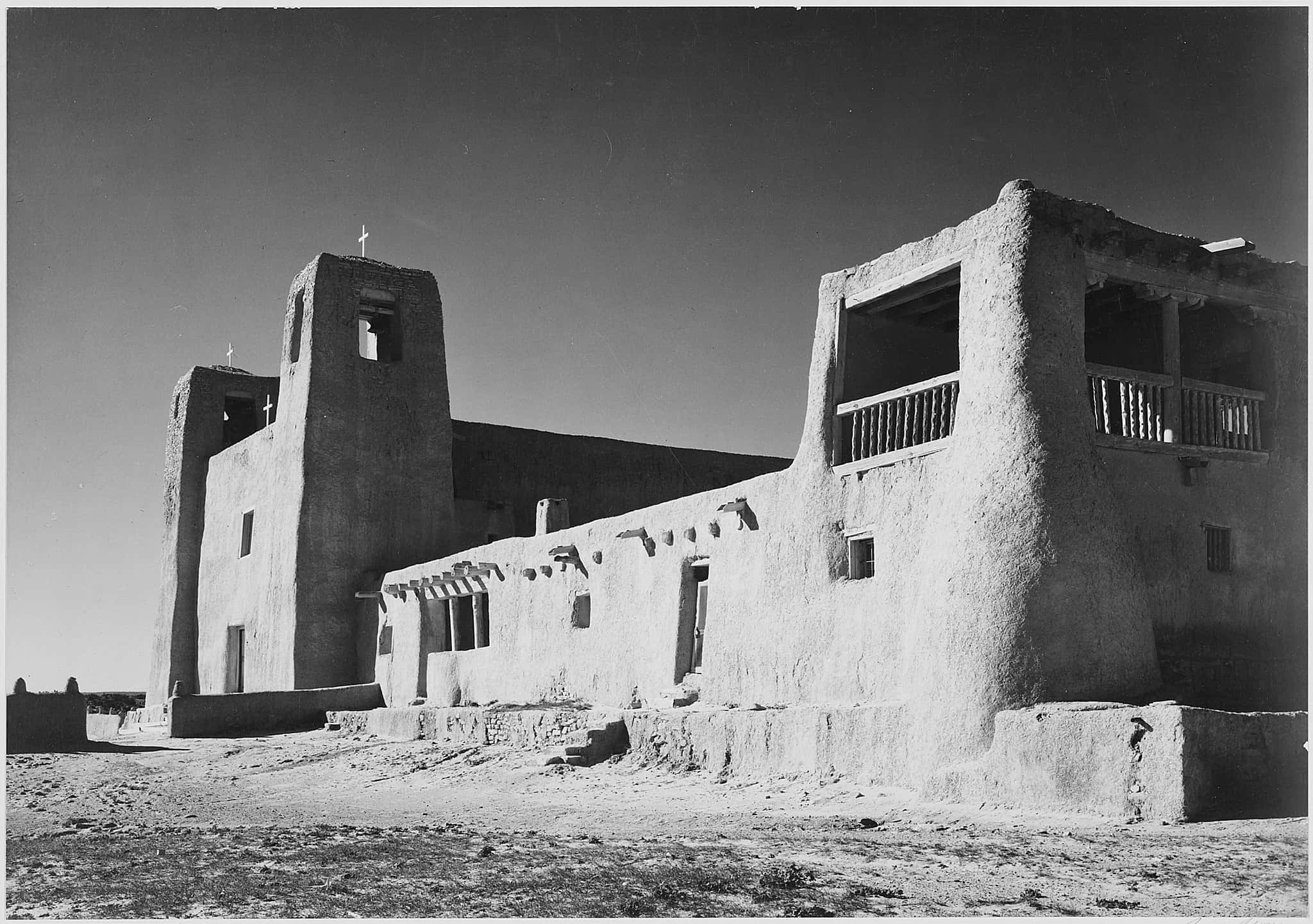 When you think of the giants in the photography industry - especially in the 20th Century - Ansel Adams has to come to mind.

I know for me, he's right at the top of my list of favorite photographers of all time.

But when people see his name, some don't realize that he had much more to do with photography than just taking epic black and white photos of western landscapes in the U.S.

Here's a "360-degree tour" of the life and times of this great photographer.

Adams was born in San Francisco in 1902, where he lived as an only child with his father and mother in the Western Addition of the city.

That meant that Adams was four years old when the Great San Francisco Earthquake hit in 1906, though, fortunately, he and his family all survived.

A year later, the family moved to an area just south of the Presidio, where they had an incredible view of the Golden Gate as well as the Marin Headlands, a view that no doubt helped Adams develop his love of landscapes.

As a child, he loved the outdoors and exploring the city around his home.

He and his father also shared a passion for amateur astronomy.

Adams was energetic and inattentive, which wasn't conducive to traditional classroom learning.

As a result, Adams's father had a large impact on his education, taking over the duties of educating the young Adams after he was kicked out of several private schools.

The teachings of Ralph Waldo Emerson were central to Adams's education - to live a modest, moral life and to work to help others and protect the environment. Emerson's teachings proved highly important in Adams's development as a person and as a photographer.

For an in-depth study of Ansel Adams's life and work, check out the video above from PBS. 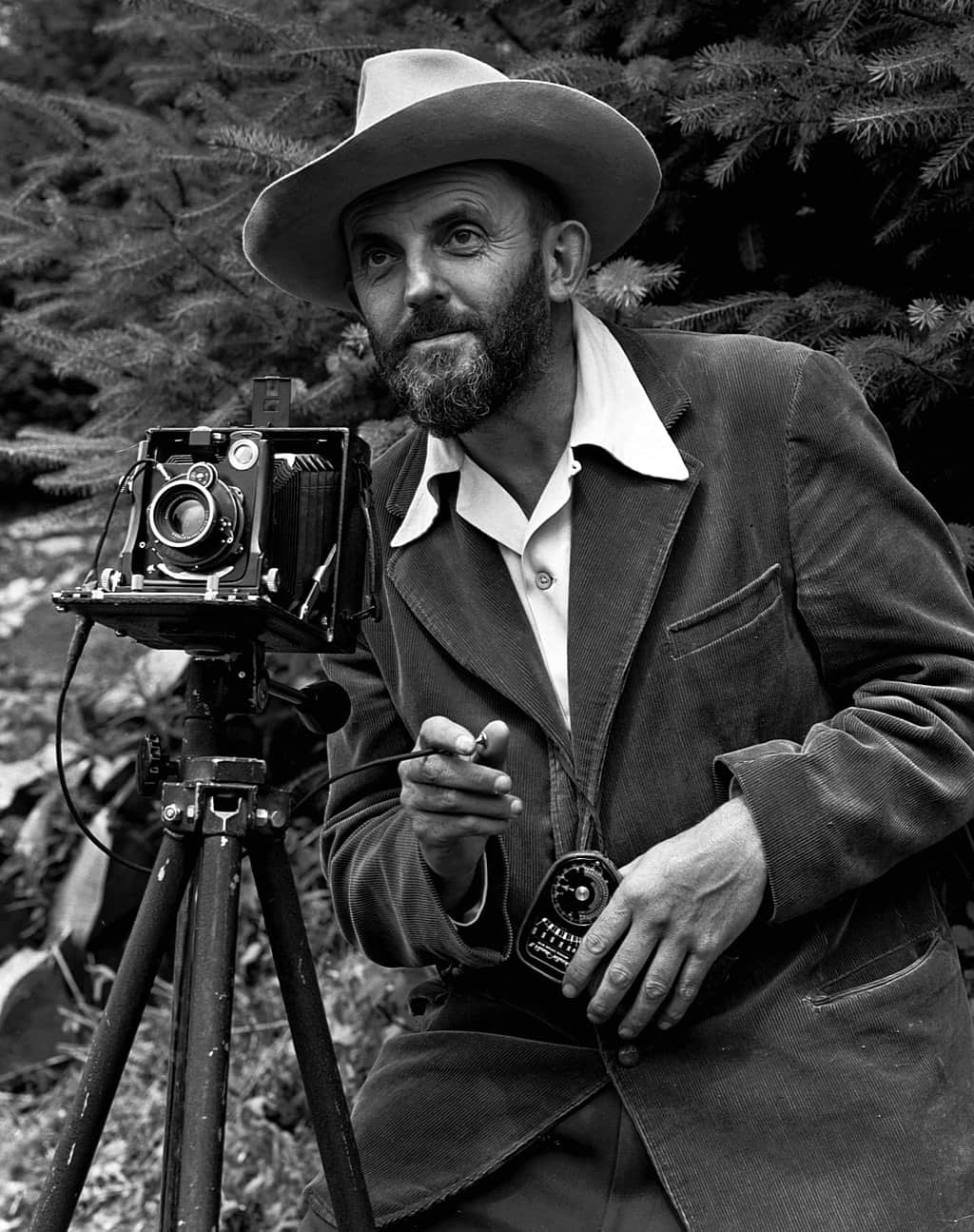 As Adams grew into a young man, it wasn't photography that grabbed his attention, but the piano.

At age 12 he began lessons, which he continued for about a dozen years, going so far as to indicate that playing the piano was his chosen profession.

Though he eventually gave it up, learning to play the piano provided Adams with the structure and drive that would be so important for helping him master another demanding artistic discipline - photography.

In 1916, Adams traveled for the first time to Yosemite National Park, which, fans of his photography understand as a seminal moment in his life.

In fact, his first camera, a Kodak Brownie, was given to him on that very trip by his father.

He was so enthralled with the scenery and his camera that he made a return trip - one of many - the following year. Only this time, Adams was better prepared with multiple cameras and a tripod.

He had a voracious appetite for photography, reading magazines and books, attending photography club meetings, and even learning darkroom techniques while working for a photo finisher in San Francisco.

He also became friends with Francis Holman, a retired geologist, who accompanied Adams to the High Sierra for year-round adventures.

Adams even met his future wife in Yosemite - Virginia Best - whose family owned Best's Studio in the Yosemite Valley. After publishing his first image in 1921, the Best Studio began selling Adams's prints the following year. The studio still stands today, and is known as the Ansel Adams Gallery.

Yet, at this point, Adams was still focused on a career in music.

The Beginnings of a Photography Career

That began to change in the mid-1920s as he began to experiment with different photography techniques that only fueled his passion for the artform even more.

His images from this period show the use of etching, soft focusing, and using different lenses to create different perspectives and visual effects.

And though these pictorial techniques - the process of creating photographs that mimicked paintings - were popular at the time, Adams eventually went another direction, favoring an approach that portrayed the subject matter is as realistic a fashion as possible.

These images, though they were early in his career, already showed an incredible level of depth, care, and balance. They also showed a dedication to the process - of planning and preparing for each shot in an effort to create a precise exposure. It was these traits that helped launch his career. Get more details about Adams's career and work in the video above from the Art of Photography.

In his late 20s, Adams joined the environmental group the Sierra Club, which hired him as the caretaker of their visitor center in the Yosemite Valley.

There, from 1920-1924, he spent the summers at the LeConte Memorial Lodge, further perfecting his photographic approach. He remained an active member of the Sierra Club throughout his life, serving on the Board of Directors for 37 years.

In 1927, Adams released his first portfolio of images, among which was one of his most famous photos, Monolith, the Face of Half Dome.

The image was taken with a Korona view camera that used glass plates and a red filter to give the image more contrast.

But more importantly, taking that particular image helped Adams become a visionary in photography. That is, with just one glass plate left for the shot, he was able to visualize how the sky would be blackened with the red filter and "see" what the image would look like before taking the shot.

Later on, he wrote that it was at this point that he determined that his photography was "worthy of the world's critical examination."

Adams Matures as a Photographer 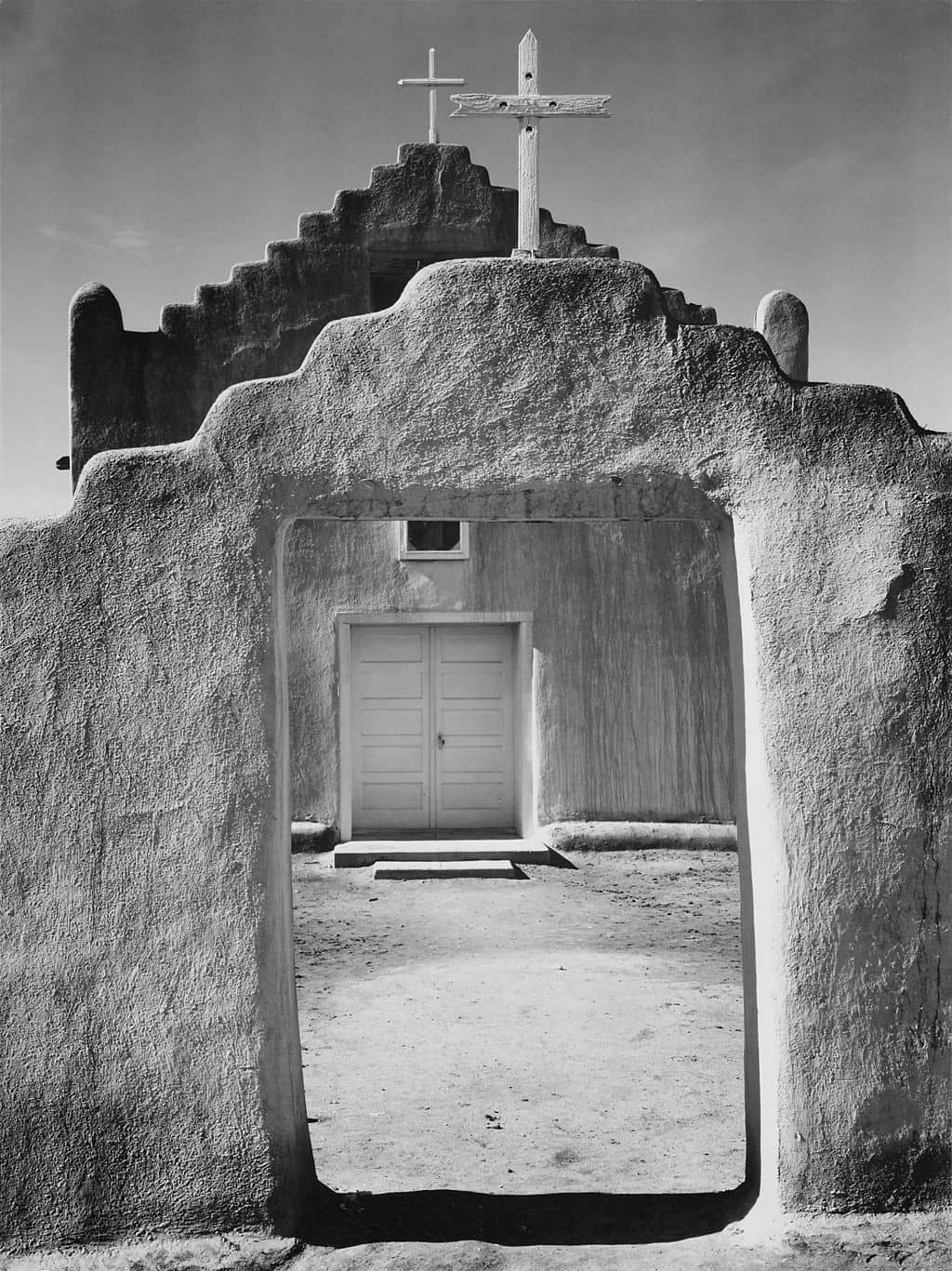 In addition to the large format black and white images for which he would become so famous, he also worked in color, close-ups, and even non-landscape imagery.

It was during this time that his first book, Taos Pueblo, was published.

Just a year later, in 1931, Adams held his first solo exhibition (at the Smithsonian, no less) which featured 60 of his images of the High Sierra. 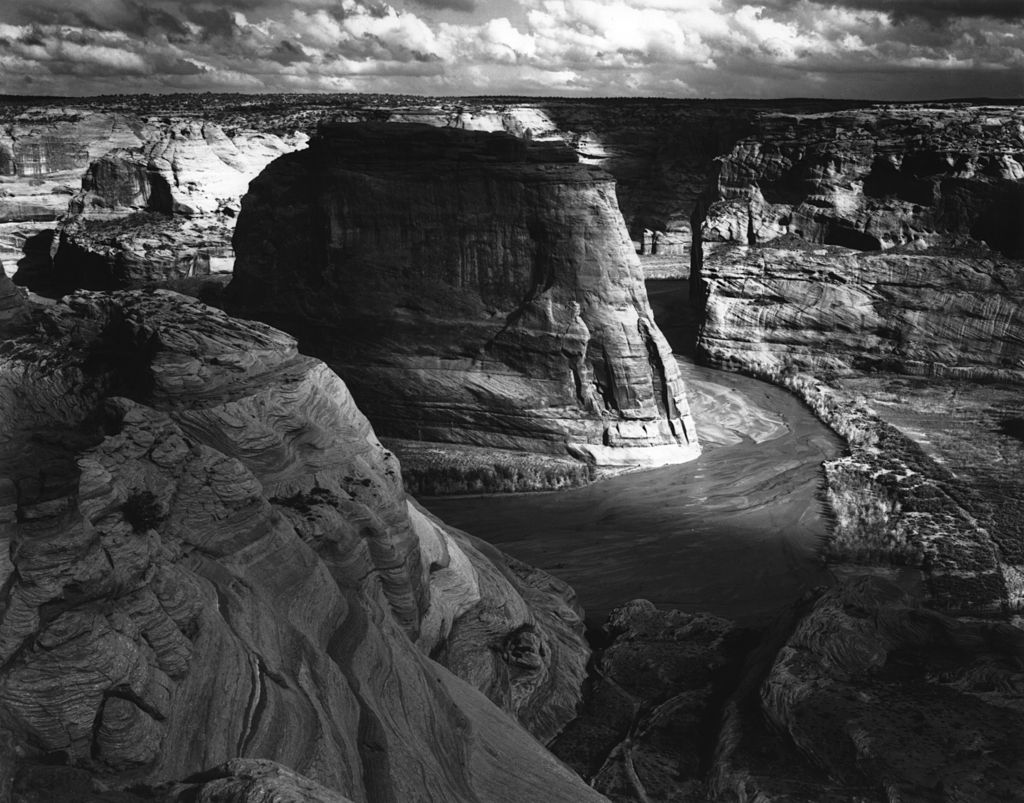 Yet despite his success, he still didn't feel as though his work was up to snuff.

That led him to found the group f/64, whose goal was to promote pure photography over pictorialism.

And that pure photography is what helped him become a champion of wilderness preservation, given that his images were so realistic.

In fact, he was instrumental in helping convince Congress to declare Sequoia and Kings Canyon as National Parks in 1940. 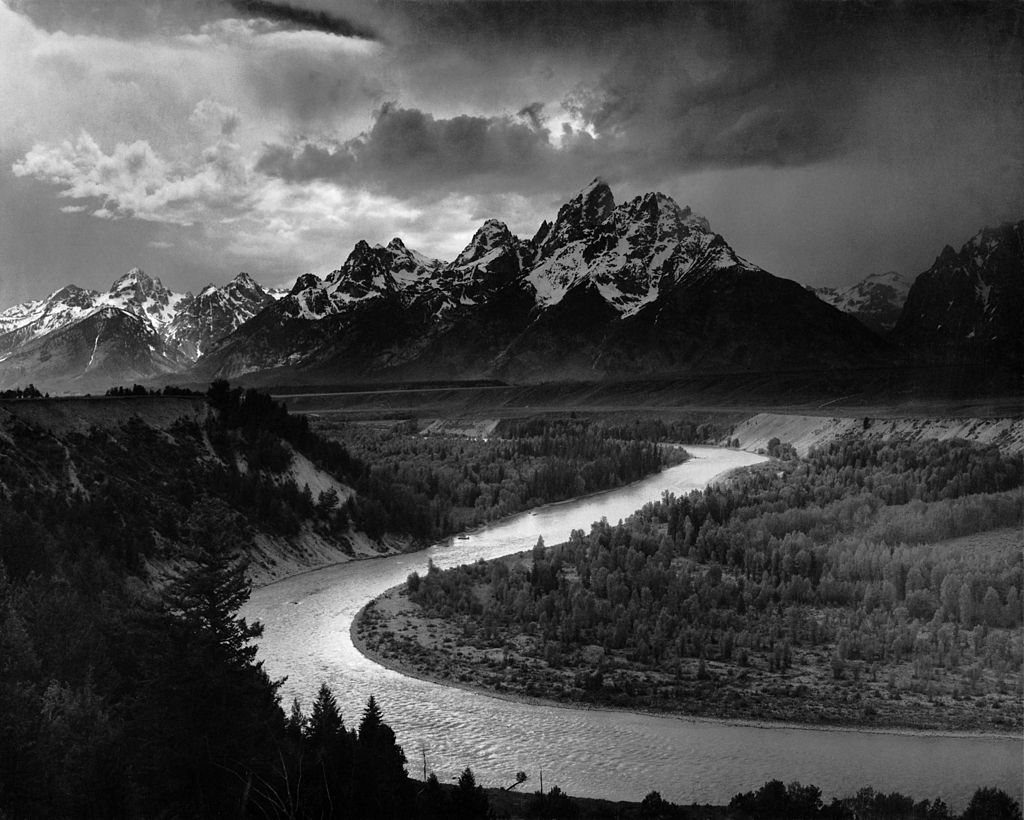 It was that decade - the 1940s - where Adams became a true icon in photography.

In 1941 he traveled to New Mexico, where he took one of his most famous photos, Moonrise, Hernandez, New Mexico, an image he took without using a light meter, instead relying on his ability to calculate the exposure based on the luminance of the moon.

But it was later in 1941 when Adams's fate as one of the greatest photographers of all time was sealed.

In September of that year, he was contracted by the Department of the Interior to photograph national parks and other western locations for the purpose of making large prints and murals for the department's headquarters in Washington, D.C.

The assignment led to some of Adams's most famous works, including The Tetons and Snake River seen above. 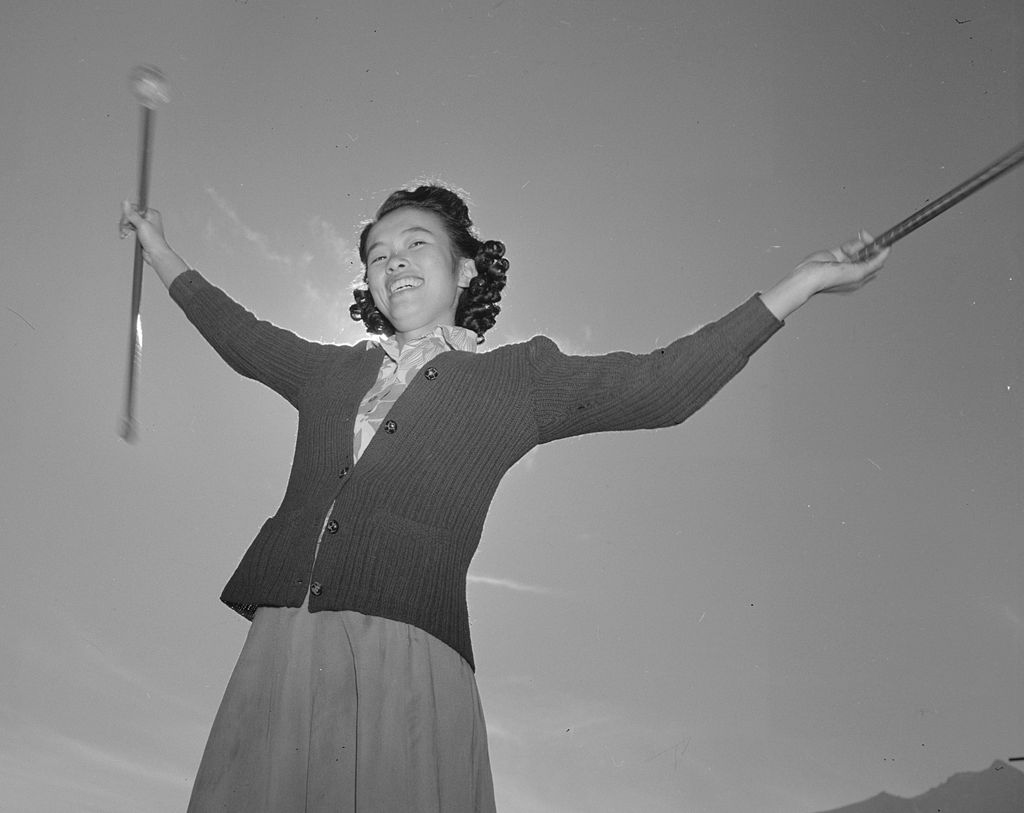 Additionally, Adams took an interest in the plight of Japanese-American citizens, who, as a result of Pearl Harbor, were rounded up and interned at camps around the country.

Adams was distressed by the actions of the government, and set out to photograph life in the Manzanar War Relocation Center, an assignment that resulted in Baton Practice, the image seen above.

Also during wartime, Adams took on a variety of photography assignments to help the war effort, including many for the military. In fact, he traveled to the Aleutian Islands to photograph secret Japanese military installations there.

After the war, Adams's work shifted back to landscapes, thanks in part to three Guggenheim fellowships, the first of which he received in 1946. 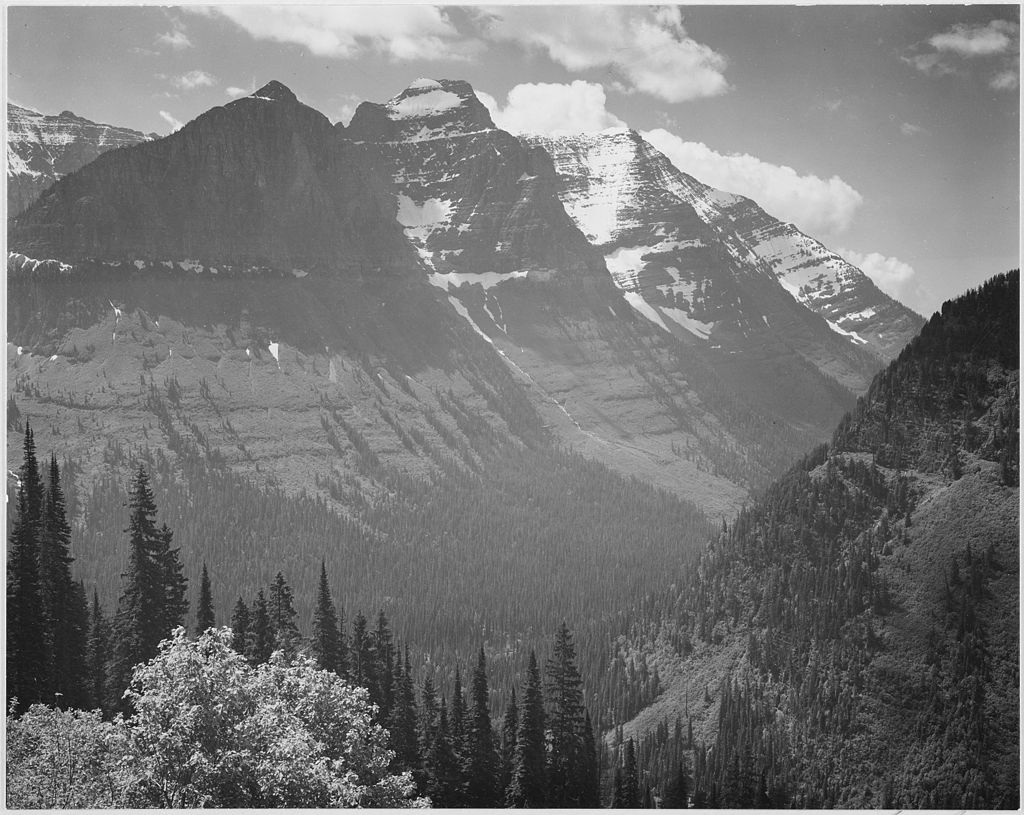 In the 1950s, Adams helped found Aperture Magazine and also began teaching annual photography workshops, which he continued until the 1980s.

He also took on various commercial photography assignments, and worked for Polaroid, using their products to take many of his images throughout the 1960s.

Mainstream art galleries began to take note of his work as well, showing his images with paintings, sculptures, and other fine art across the nation.

Naturally, Adams's black and white images of the American West remain his most famous works, and perhaps his most important legacy.

His ability to portray landscapes in such a realistic manner allowed viewers to experience natural wonders in a way that had been difficult to do without actually visiting the locations themselves.

His love of landscapes also helped expand the National Park System and catapult the Sierra Club to a national powerhouse of environmental conservationism. 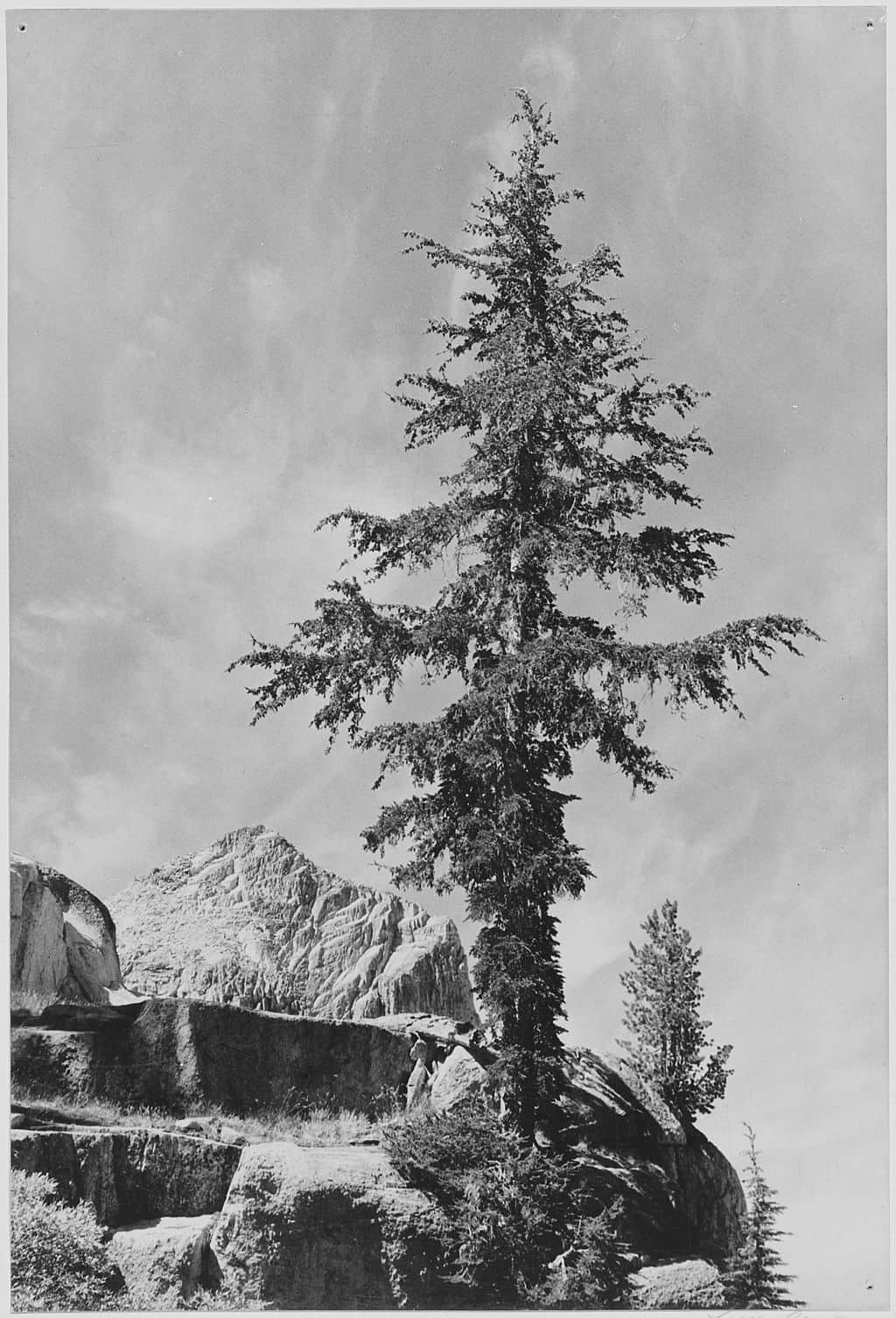 Perhaps lesser known is Adams's involvement (along with Fred Archer) in developing the Zone System, which allowed photographers to translate light into specific densities. That, in turn, gave them far better control over how their final images looked.

Likewise, Adams pioneered the practice of previsualization, in which the photographer sees the final image in his or her mind before they ever press the shutter button.

Naturally, this practice was intended to improve the final image by helping the photographer focus on composition and the technical aspects of taking a photo.

A list of Adams's achievements wouldn't be complete without mentioning his role in making photography an acceptable fine art, right alongside music, painting, sculpture, and so on.

As a result of his tireless work, photography was elevated from a novelty to a serious artform, and his images live on as testament to the capability of photography to capture beauty and help people experience emotions.