The First Candid Photograph of a Human, and the Interesting Facts Behind It 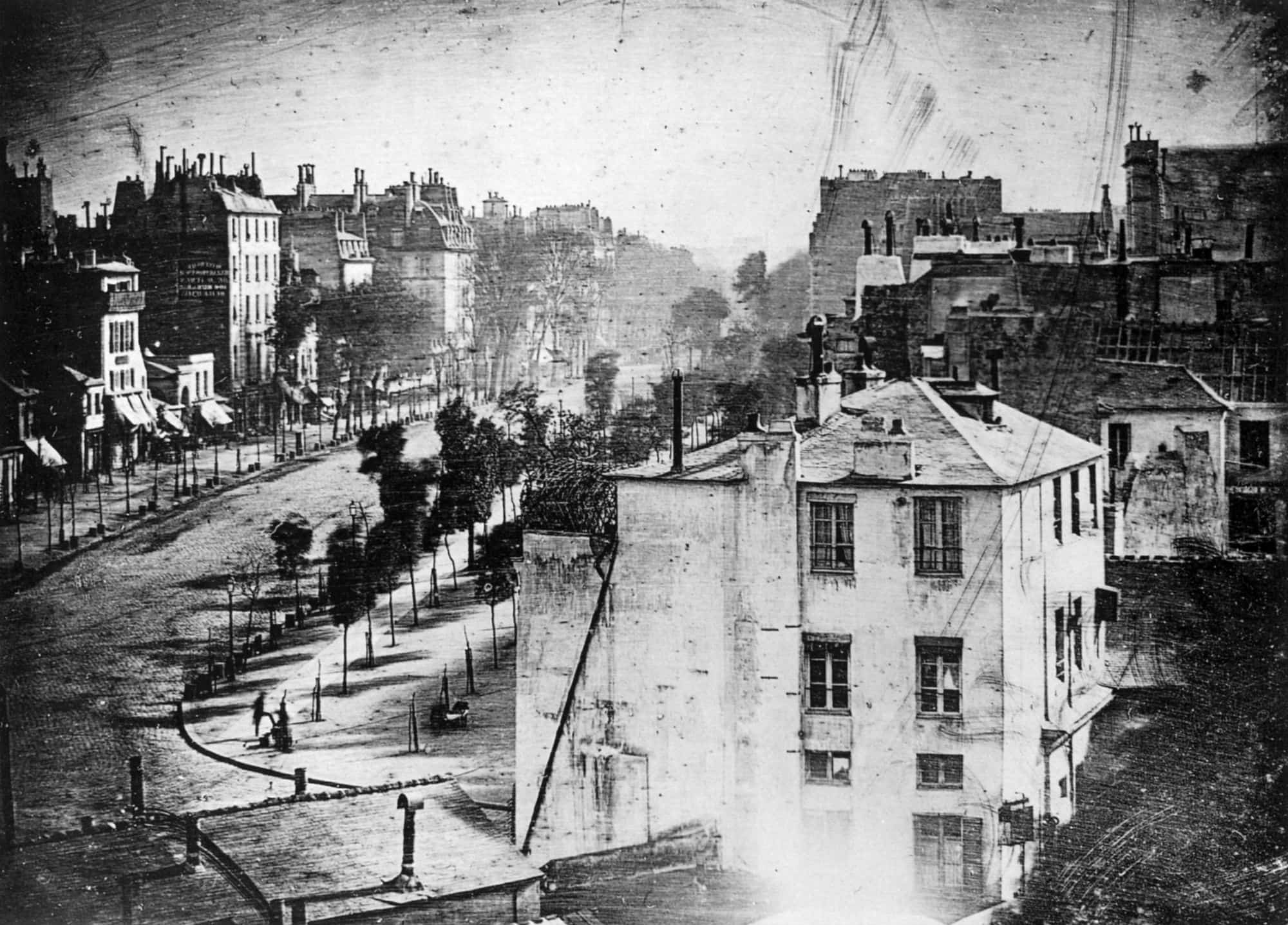 If you were asked to name the earliest known candid photograph of a person, I'm guessing that you wouldn't come up with Boulevard du Temple, shown above.

Taken by Louis Daguerre in 1838, it's not exactly a close up of the two men on the street, one of which is apparently shining the other's shoes.

That's because this image was never intended to be a portrait.

Instead, Daguerre was taking a photo of the Boulevard du Temple, a busy Paris street teeming with people on the sidewalks and carriages in the street.

However, because the Daguerreotype process - the photographic procedure named for Daguerre that he used to capture the image - required a several minute exposure, anything that was moving was not visible. 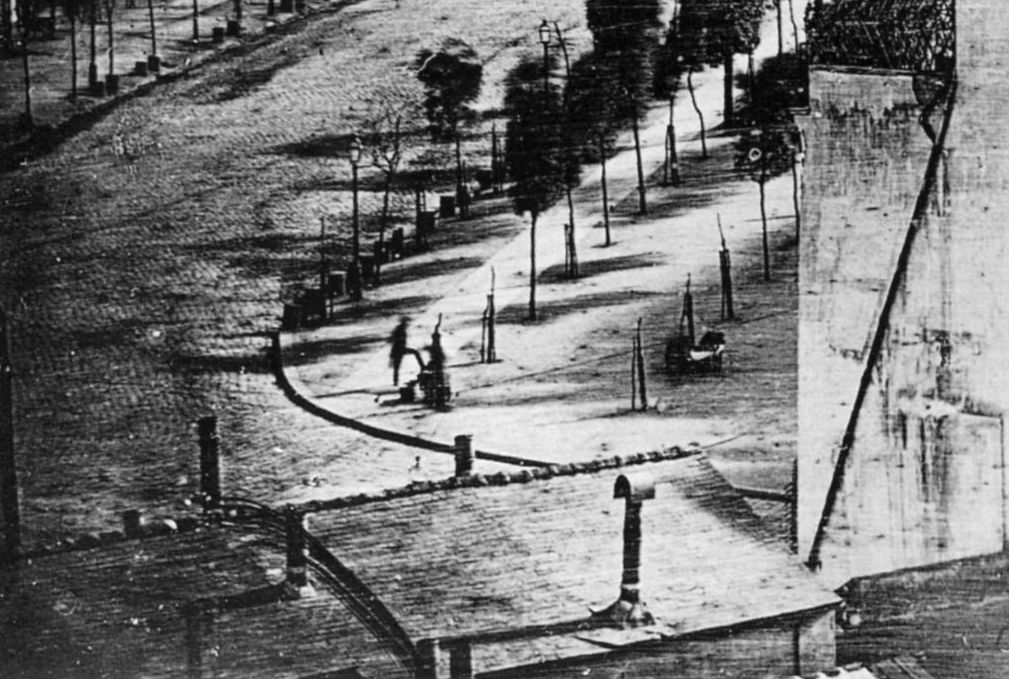 Yet, a close-up of the image shows the the two men on the street corner, both of which were motionless enough to be captured in the photo.

The man on the left remained still as his boots were being polished, and, naturally, the bootblack doing the polishing had to remain relatively still to do his job.

You can see, however, that as the minutes ticked by that both men were still moving to some degree, which is why they both look like blurry, ghostly figures in the photo (if you look really closely, you can see a third man sitting on a bench to the right of the first two - the man getting his shoes shined seems to be looking directly at him).

It is for that reason that photographers of the period focused on still lifes and portraits - the exposures were simply too long to freeze movement. 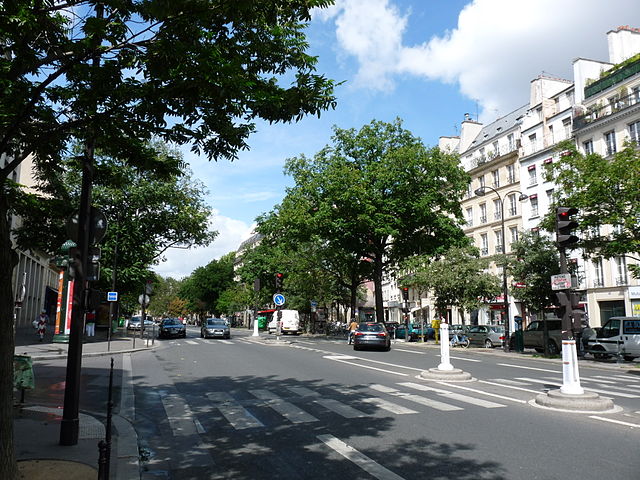 By Ralf.treinen (Own work) [CC BY-SA 3.0 (https://creativecommons.org/licenses/by-sa/3.0) or GFDL (http://www.gnu.org/copyleft/fdl.html)], via Wikimedia Commons

The image above shows how the boulevard has changed since 1838. Remove the modern cars, signage, and asphalt, and things look relatively the same.

In Daguerre's day, he positioned himself atop his Diorama building looking generally south over the rooftops of the adjacent buildings to the Boulevard du Temple.

The boulevard was constructed between 1656 and 1705, and was so named because the Knights Templar Temple and priory was located nearby.

In the late 1700s up until a few years before the famous photo was taken, the boulevard was an extremely popular place for Parisians to take a stroll, enjoy cafes, and attend the theatre.

But in 1835, there was an attempt on King Louis-Philippe's life, and though he survived, 18 others were killed and 23 were injured. That event tarnished the area's reputation to a degree.

Nevertheless, the boulevard remained popular in Daguerre's day, and presented him with an interesting subject for his photographs. 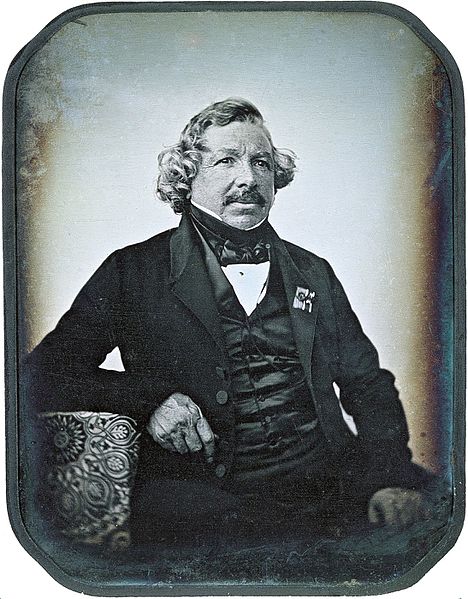 Louis-Jacques-Mande Daguerre was born on November 18, 1787 in Paris.

Though he is most well-known for his Daguerreotype process, he was also an accomplished painter and invented the diorama theater.

Daguerre began his photography exploits in 1829, when he began working with Nicephore Niepce a fellow Frenchman and inventor who developed heliography - the precursor to the Daguerreotype process - in 1822. You can see some of Daguerre's photos in the video below by Chubachus:

Heliography required bitumen to be dissolved in a bath of lavender oil and then coated onto a lithograph or sheet of glass or metal.

Once the coating was dry, an engraving was placed on the surface of the metal or glass, then exposed it to direct sunlight.

After a period of time, the lavender oil was washed off, and with it, any unhardened bitumen. The remaining dark areas of the surface could be etched with acid to create a lithograph.

Needless to say, the process was time-consuming, but Niepce is nevertheless credited with the oldest surviving photograph ever taken, View from the Window at Le Gras, shown below. 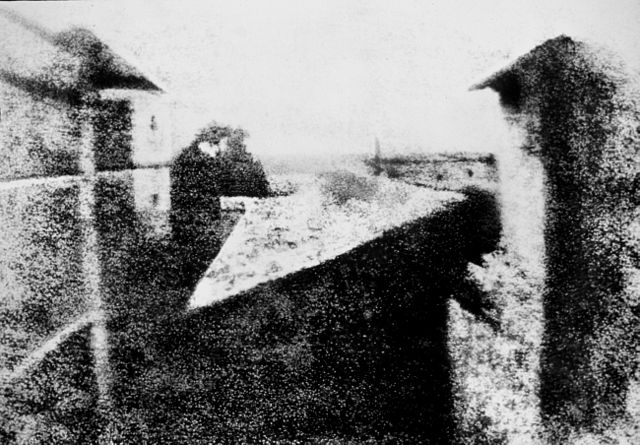 When Niepce suddenly passed away in 1833, Daguerre continued his work.

Eventually, Daguerre improved upon the heliographic process by polishing a sheet of copper that had been silver plated, exposing it to fumes that made it sensitive to light, and then exposing the sheet in a camera.

The camera was a large box, seen in the graphic below, and was but one of many steps in the process of creating a photo. 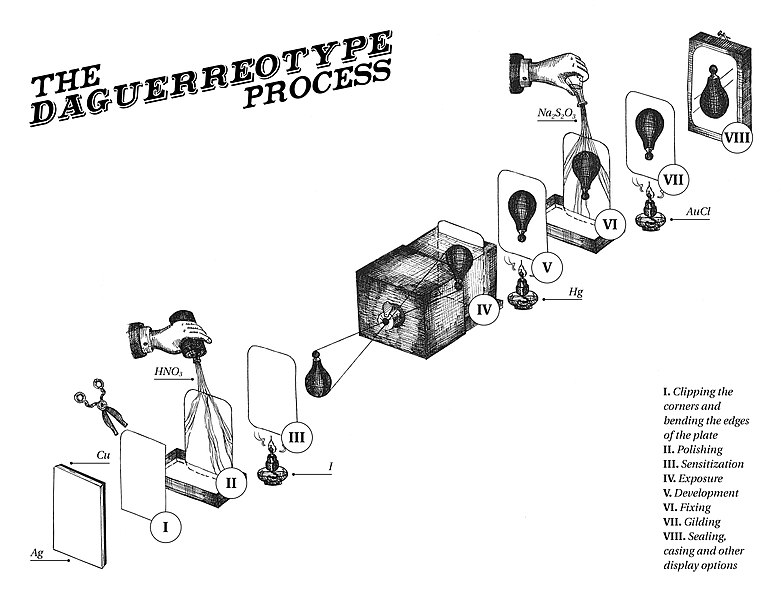 Then, he would process the latent image by exposing it to iodine vapor and putting it through a chemical treatment to negate its sensitivity to light.

After rinsing the image in salt water and drying it, he sealed the image within a protective glass enclosure.

The image itself appeared on a silver surface that had mirrorlike qualities. That is, depending on the angle of view, the ambient light, and other factors, one could see either a positive print or a negative.

Learn more about how Daguerre perfected his photographic process in the video below by harveybiv:

To say that Daguerre's successful image of Boulevard du Temple sparked interest among the people of Paris in his process is an understatement.

Unlike the heliograph process, which rendered dark, blurry images, the Daguerreotype process was one that rendered incredibly detailed images.

At the time, people looking at Daguerreotypes must have thought them to be a magical, inexplicable thing.

Interestingly, Daguerre had no intention of patenting and profiting from the Daguerreotype process in the usual way.

Rather, he made arrangements with the French government that allowed it to take the rights to his invention in exchange for a lifetime pension for himself and for Isidore Niepce, the son of his business partner. 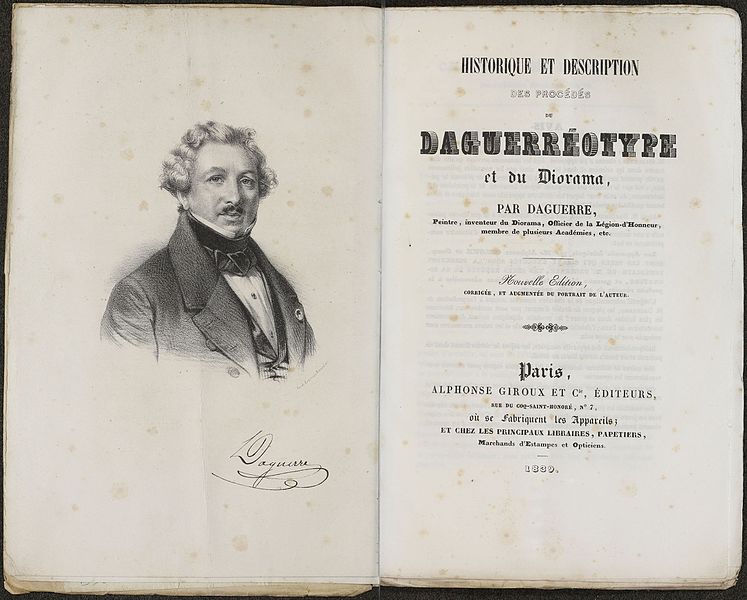 So, on August 19, 1839, the French government bestowed to the world the Daguerreotype process for free. Though, in an interesting twist, Daguerre's patent agent, Miles Berry, filed for a patent just days prior that applied to the United Kingdom and its colonies abroad.

That meant that anyone in the U.K. or its territories was required to have a license to create and sell daguerreotypes, while anyone anywhere else in the world was free to do as they wish.

Though the Daguerreotype process was really only popular in the 1840s and 1850s, it nevertheless paved the way for more modern types of photography.

Improvements on the process meant that photos could be taken faster with shorter exposure times, though it would be decades before they were short enough to capture movement.

Unfortunately, much of Daguerre's early photos were destroyed in a fire in March 1839. Today, just a couple dozen of his images remain.

Nonetheless, Daguerre's place in history as one of the fathers of photography was set when he created Boulevard du Temple. Learn more about the significance of the Daguerreotype in the video above by the George Eastman Library.