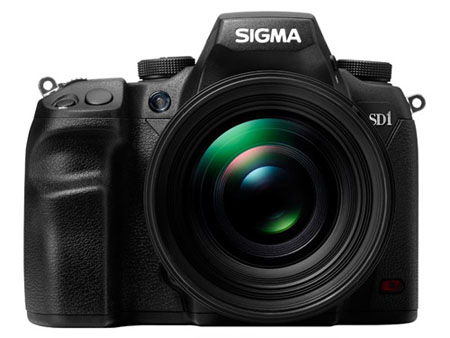 Sigma is causing heads to turn (and sometimes shake) with the introduction of its SD1 DSLR camera (June 2011). Reportedly, the company wants to sell this camera to medium-format photographers as a portable option. It must, therefore, be loaded with competitive features and capabilities, since the MSRP is $9,700. That’s the same price tag of Pentax’s medium-format, 40-megapixel 645D. This PhotographyTalk.com article will try to explain what makes the Sigma SD1 special, and worthy of its position as the most-expensive APS-C DSLR.

It all begins with the SD1’s new 15x3MP Foveon sensor. Sigma purchased Foveon during 2008, since Sigma had built its SD and DP series of cameras with Foveon’s original 4.7x3MP sensor. Sigma wanted Foveon, so it could concentrate on developing sensors, such as the 15x3MP, that are required for superior photography. A Foveon sensor is very different from all others. In virtually all cameras, a pattern of colored filters is located in front of the sensor. That allows the separate photo sites to collect red, green or blue light.

Such filters are not paired with Foveon sensors. Instead, Foveon uses the propensity of various colors of light to penetrate silicon to different depths. The sensor “records” the number of photons trapped at the Red, Green and Blue levels of penetration—and at all 15 million photo sites! This translates to capturing three times as much color data as a conventional sensor, for every pixel. This is what distinguishes the Foveon 15x3MP sensor from other digital cameras and allows Sigma to describe it as a 46MP camera.

Another benefit of this technology is that the Foveon sensor in the Sigma SD1 is not prone to produce color moiré patterns. To reduce this effect in other cameras with standard Bayer-pattern sensor, an optical, low-pass (or anti-aliasing) filter is used. The problem is that this filter causes some fuzziness in photos at the pixel level, which in turns lowers the camera’s resolution. This is another difference between the Foveon sensor and all others: There’s no such filter on the Foveon. The fuzziness doesn’t occur and the SD1 makes significantly sharper images, and at a pixel count that doesn’t typically translate to such fine detail.

Although the Sigma SD1 body is a noticeable advancement over Sigma’s SD14 and 15 designs, it is still a rather standard-looking camera, but that’s a good trait. It should be easy to control, even when framing and composing a photo, because the twin-control dials and settings buttons are clearly separated and very accessible. They’re not in the most “natural” locations for the fingers, but it won’t take long for a photographer to be able to reach and manipulate them, automatically.

Sigma’s claim that the SD1 is an alternative to medium-format cameras gains much credibility when the camera is held and cradled in the hand. Its resin construction gives the camera a substantial heft, but the feel of a lighter weight body. Part of the SD1’s conventionality can be attributed to the fact it has neither a movie mode nor live view. A photographer won’t find dynamic range expansion, HDR, 3D mode or creative effects. The twin-control dials are simply dedicated to setting and controlling aperture and shutter speed. The lack of these features won’t attract any hobbyists or enthusiasts, which is, of course, part of Sigma’s strategy. Those camera buyers want as many automatic functions as possible and a movie-making capability.

Read Part 2 of this PhotographyTalk.com article for additional information about the Sigma SD1 camera.