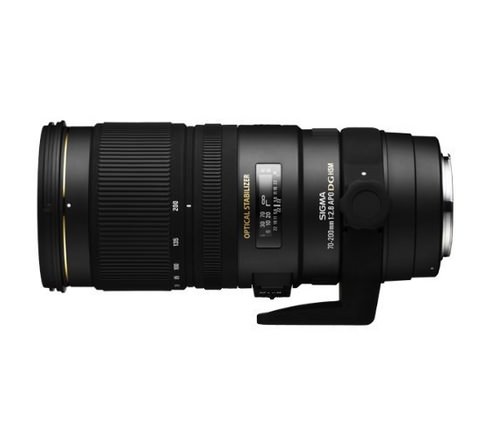 During the last decade, Sigma has been tweaking the design of its original 70–200mm f/2.8 APO zoom lens. Now, with the new 70–200mm f/2.8 EX DG OS HSM, Sigma has taken a much bigger step forward, as this lens is the first image-stabilized, fast telephoto zoom from a third-party manufacturer. This means Sony and Pentax camera owners now have a lens with optical stabilization they can use; and it costs significantly less (approximately $1,350–$1,400) than similar Canon and Nikon lenses (approximately $2,000–$2,500 and $2,400, respectively).

Physically, the Sigma 70–200mm f/2.8 OS zoom lens can be examined from a number of perspectives.

Rings and switches
On most fast telephoto zoom lenses, you’ll find the zoom ring near the center of the barrel and the focus ring to the front. Sigma has a different configuration, with the manual focus nestled behind the zoom ring and both closer to the front of the barrel. Don’t be surprised if it takes some time to become comfortable with the zoom-ring location. You may be equally surprised by how much you like it there. You’ll have no difficulty finding the auto-focus and stabilization systems’ switches, since they are clearly visible in a panel on the left side of the lens.

Finish
The 70–200mm f/2.8 certainly looks like a major redesign. The primary finish on the barrel is a matte black instead of Sigma’s signature crinkled coating, which has been retained for the zoom and focus rings and the tripod collar.

Construction
You’ll never mistake the plastic feel on your hands, but the Sigma 70–200mm f/2.8 will feel substantial and strongly built in your hands. All the moving parts glide effortlessly through their ranges, which are additional signs of above-average construction. Sigma deserves credit for retaining the tripod collar design from the predecessor of this lens, since many photographers and experts consider it the best of its type.

Body Combination
As with its competitors, the Sigma 70–200mm f/2.8 is a handful, which is why its best combined with larger bodies, such as professional-level DSLRs (Canon EOS-1D(s) or Nikon D3 series). If you do pair it with a smaller camera body, it’s recommended that you use a vertical lens grip. A primary advantage of the zoom ring being at the front of the camera is that the tripod foot doesn’t need to be moved, so you can shoot hand-held.

Hood Hassle
A minor design flaw is that when the very large lens hood is reversed, it prohibits the use of the controls. You can’t operate the zoom ring and only have limited access to the AF and OS mode switches.

Part of Sigma’s major redesign to create the 70–200mm f/2.8 OS lens is a new optical configuration. It features advanced glass technology, which Sigma has named “FLD,” or F Low Dispersion. This means it has similar optical characteristics as Fluorite, which has had much to do with the high quality of Canon lenses. Of the Sigma lens’s 22-element/17-group structure, two are the FLD elements and three are the more common Super-Low Dispersion (SLD) glass.

The “FLD” glass elements appear to be responsible for eliminating virtually all chromatic aberration in this lens. The entire image is spotless because there is no color fringing. The Sigma 70–200mm f/2.8 OS lens rates very well, with little distortion; however, there is more vignetting than should be expected for a lens of this type.

Read Part 2 of this PhotographyTalk.com article for the conclusion of the Photography Equipment Review of the Sigma 70–200mm f/2.8 EX zoom lens.