How to Master the Sunny 16 Rule 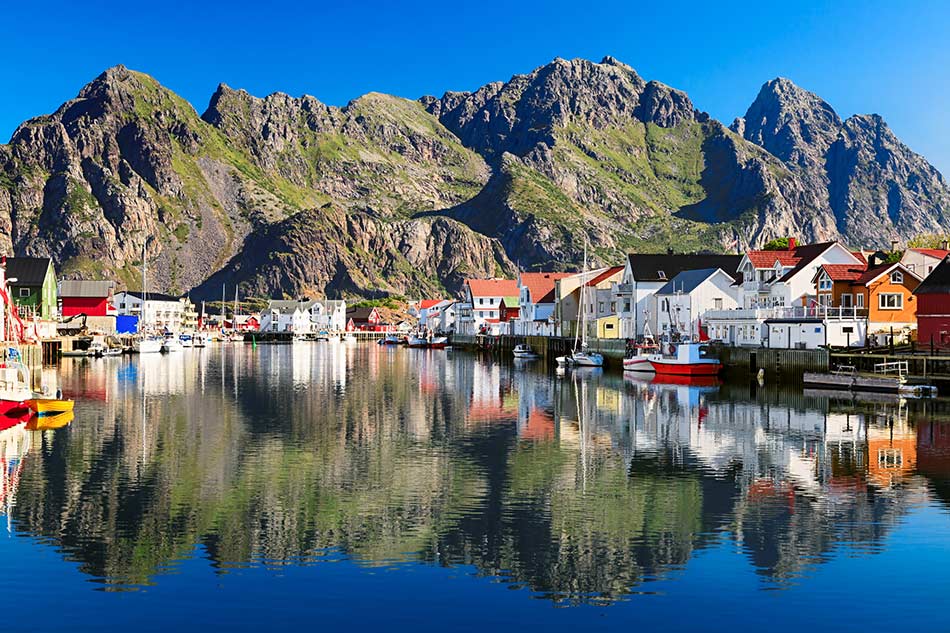 That’s about to change!

We’ve assembled a comprehensive guide on the Sunny 16 Rule that will help you master the art of using it to create well-exposed images in various lighting situations, all without having to rely on a light meter. Sounds great, right? Let’s get started! 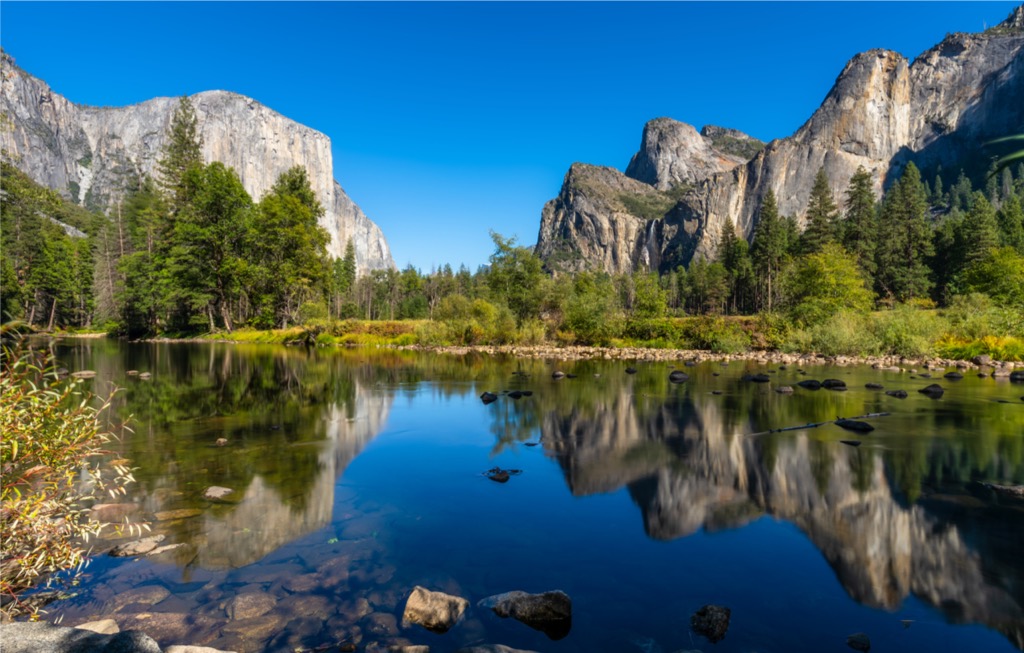 At its heart, the Sunny 16 Rule is essentially a cheat sheet that allowed photographers back in the heyday of film photography to get the right camera settings for various lighting conditions. It serves as a starting point of getting a solid exposure without the necessity of stopping all the time to get a meter reading.

Naturally, since the Sunny 16 Rule deals with exposure, you have to have a solid understanding of aperture, ISO, and shutter speed, which together form the Exposure Triangle. If you need to brush up on these concepts, check out Learn the Fundamentals of Exposure in 15 Minutes or Less as a refresher.

On a sunny day, shooting with an aperture of f/16 requires that the shutter speed to get a well-exposed image be the inverse of the ISO used.

Let’s explore an example to make this a little more clear.

Imagine you’re photographing a landscape under clear, blue skies. You’ve dialed in f/16 as the aperture and are using an ISO of 100. Based on those settings, the Sunny 16 Rule recommends that the shutter speed be 1/100 seconds. Doing so will get you close to a well-exposed image. As another example, if you’re shooting at f/16 with an ISO value of 400, your shutter speed would need to be 1/400 seconds. This inverse relationship between ISO and shutter speed will get you the same well-exposed result each time, assuming the skies remain clear and bright.

As you can see in both of these examples, the aperture remains constant. As long as the sun is shining, the aperture should remain at f/16 and the ISO and shutter speed should be manipulated accordingly. Note, however, that this rule just gets you close to a good exposure - it doesn’t guarantee that the result will be optimal. In some instances, you might need to do a little further experimentation to get the best exposure. 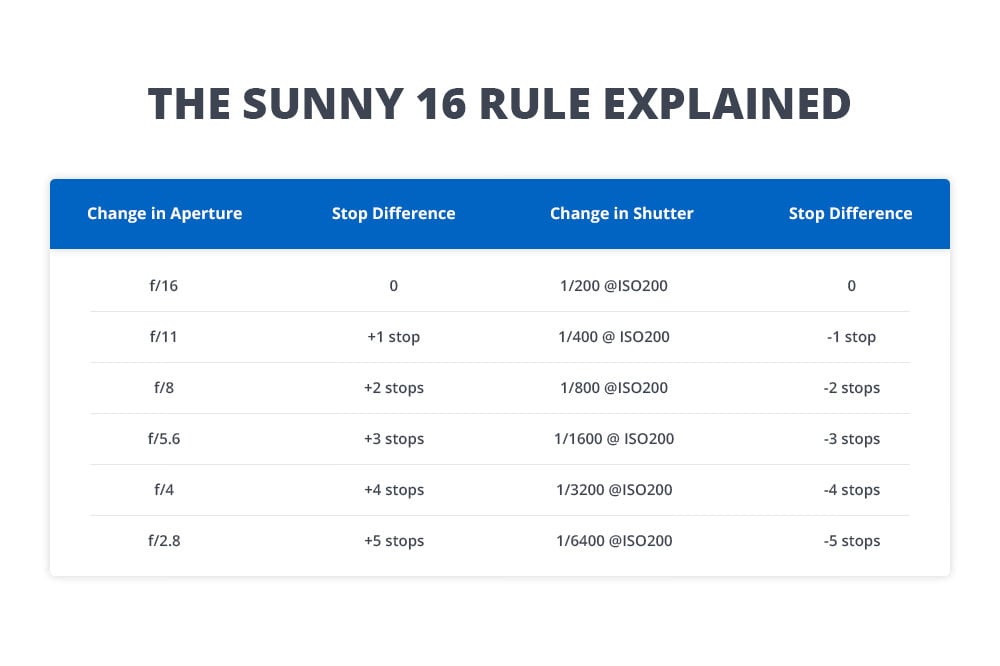 For now, understand that the Sunny 16 Rule is an effective method of determining the settings to use for a well-exposed image because both the aperture and the shutter speed operate in incremental stops. In other words, if you adjust the aperture by one stop, such as from f/16 down to f/11, it results in twice as much light entering the lens. Moving the other way one stop, from f/16 to f/22, halves the amount of light entering the lens.

As you can see above, this rule can be used to help you identify the appropriate shutter speed to use at other apertures as well.

You can see this balancing act in the chart above - every time the aperture is changed, the shutter speed is changed in the opposite direction to maintain the same exposure.

The Sunny 16 Rule in Action 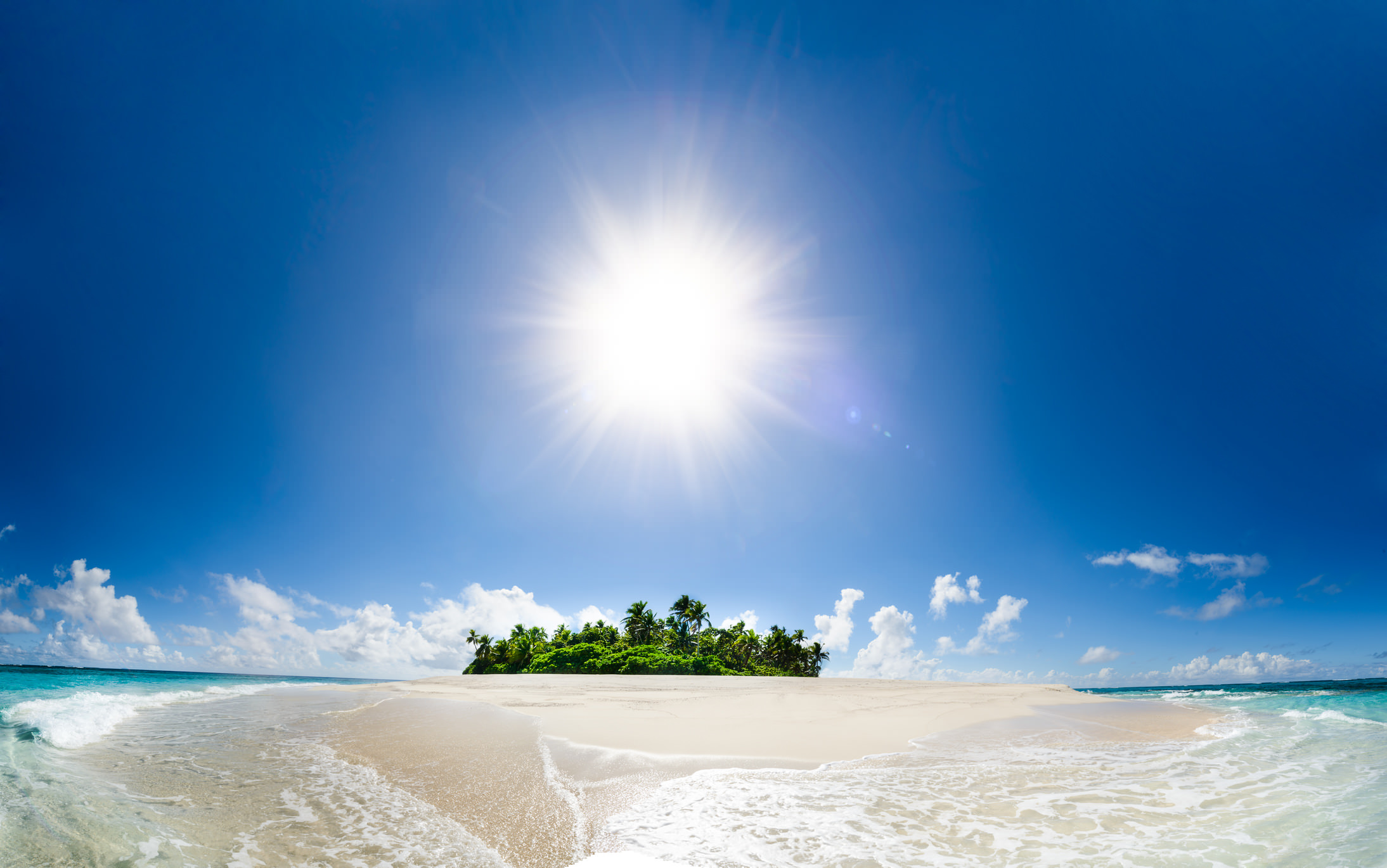 As noted above, the whole premise of the Sunny 16 Rule is that sunlight provides a consistent, even source of lighting.

However, the intensity and the quality of sunlight is impacted by a variety of factors, from clouds to snow to rain and so on. Each of these factors requires that changes be made to the aperture setting such that you can get a good exposure.

The Sunny 16 Rule is easy to remember because it’s used in the most common of weather situations. There’s also something about Sunny 16 that has a nice ring to it that makes it easy to remember. Other weather conditions require other aperture values, none of which are as easy to recall:

As with the Sunny 16 Rule, these other rules are meant to provide you with a ballpark exposure that should be close to spot on. They are not a guarantee, but will certainly help you zero in on the best exposure given the specific circumstances. 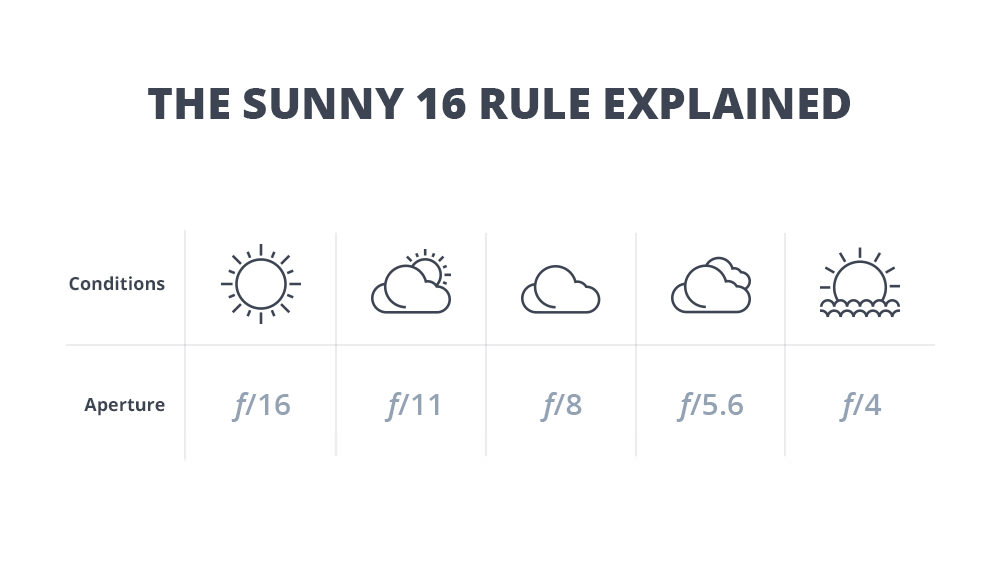 Assume that when you head out to take photos, that you’re presented with a sunny day. As such, you use the appropriate settings to get a good exposure - an aperture of f/16, an ISO of 200, and a shutter speed of 1/200. But then, imagine that as the day goes on that cloud cover comes in. When you return to your favorite spot to take more photos, you find that you’re now shooting under heavily overcast skies, necessitating the use of the Heavily Overcast f/5.6 Rule.

By opening the aperture to f/5.6, you let in more light to compensate for the diminished light under heavy overcast skies. In other words, all that's changed here is the aperture - the ISO and shutter speed you use remain the reciprocal of one another.

In short, on a sunny day your settings would look like this:

And on a heavily overcast day your settings would look like this: 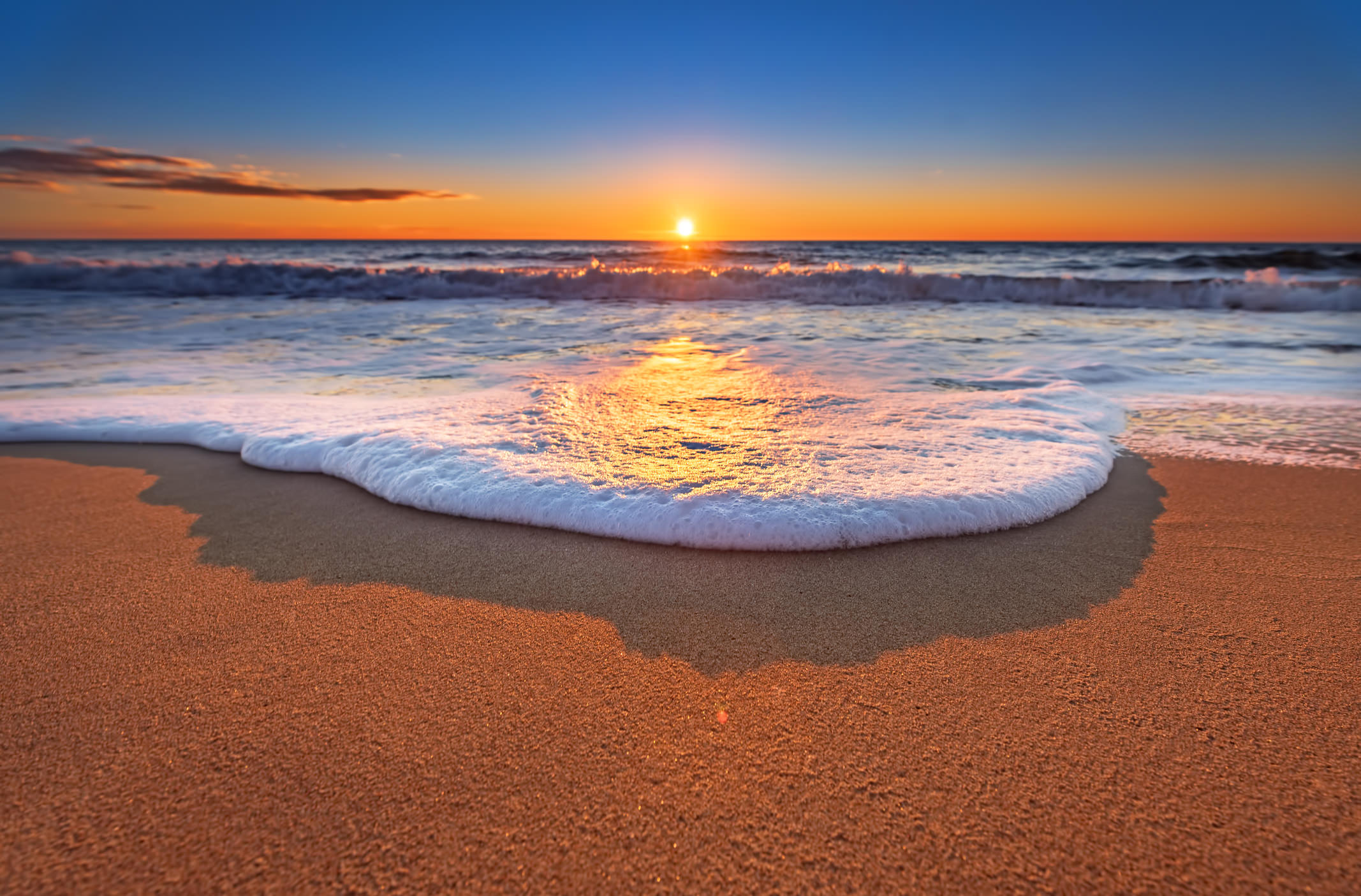 Let’s try another example. Say that you’re shooting some landscape photos under sunny skies, but time slips away from you and you’re eventually faced with a sunset. Using the Sunset 4 Rule, you would change your aperture of f/4 and maintain a shutter speed of 1/200 seconds and an ISO of 200. Again, you’ve simply increased the light allowed into the lens by opening the aperture by four stops.

So, again, your settings on a sunny day would look like this:

Why You Should Use the Sunny 16 Rule 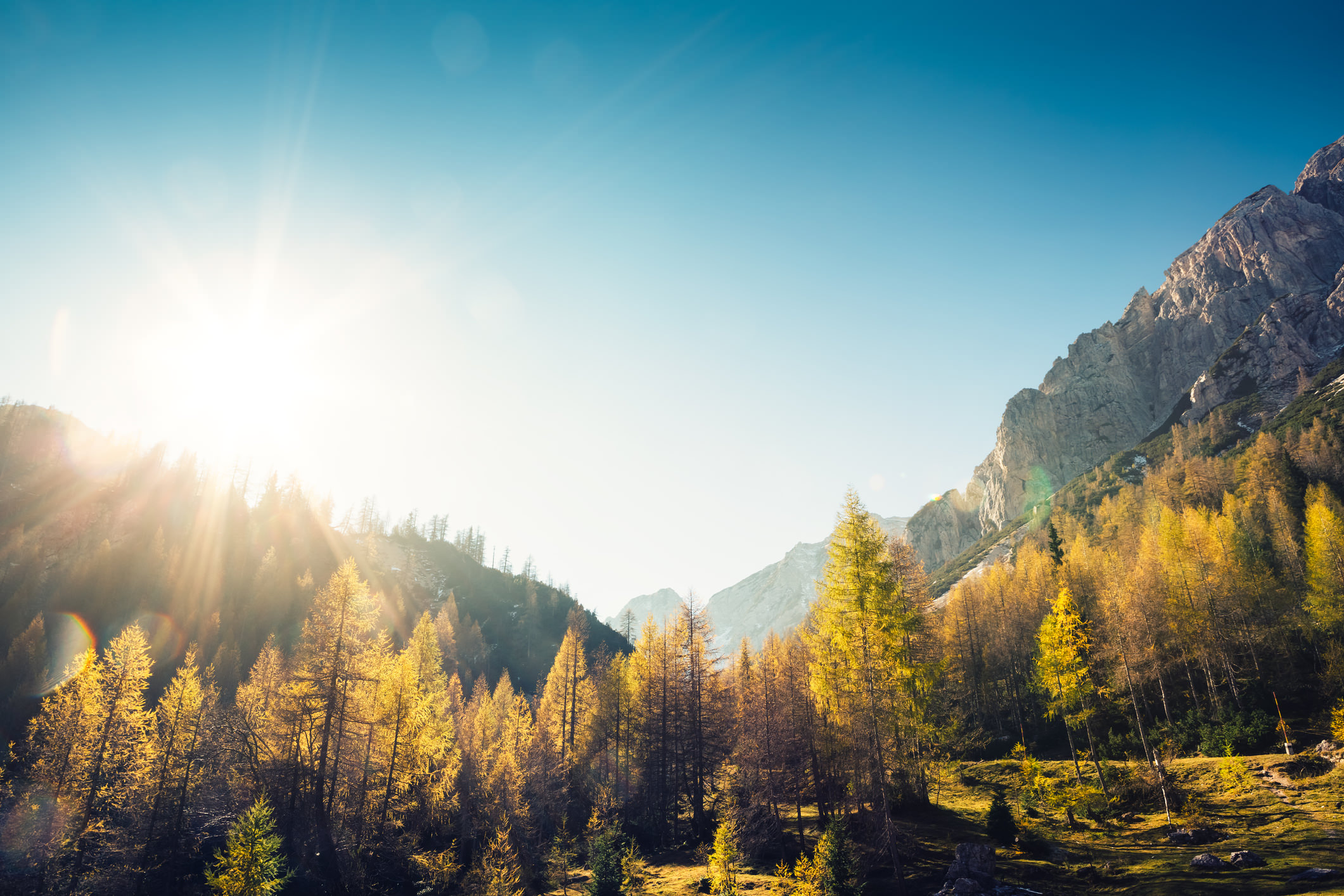 First and foremost, the Sunny 16 Rule is an easy way to keep track of what settings you need to dial in to get a good exposure, no matter the weather conditions. This is certainly handy for new photographers, but even for those with some experience, it’s a nice reminder of where you need to begin in terms of the exposure settings you need to use. Rather than having to remember aperture, shutter speed, and ISO, all you have to do is associate the aperture with the different weather conditions and maintain a reciprocal relationship between the ISO and shutter speed.

Another benefit of the Sunny 16 Rule is that you can use it to find out if your camera is capturing accurate exposures. Some cameras - even when they are brand new out of the box - can tend to underexpose images. By using this rule, you can test your gear to find out if it naturally tends toward underexposure, overexposure, or if it is spot on.

Finally, the Sunny 16 Rule allows you to measure the incident light in the environment, that is, the actual light in the scene. Your camera’s metering system instead relies on reflected light, which, at times, can trick your camera into thinking that the scene is brighter or darker than it actually is. So, instead of relying on a system that might or might not get it right, you can use the Sunny 16 and its related rules to get close - if not spot on - whether it’s sunny, snowy, cloudy, and the like.

With that, you now have a better understanding of how the Sunny 16 and its associated rules can help you snap images that are well-exposed. Armed with these rules, you will be better equipped to create images that have a good exposure, which, as we all know, can make or break the quality of the image. Now all that’s left is to grab your camera and practice using your newfound knowledge!

Might I suggest:  7 Things You Need To Know About the Sunny f/16 Rule