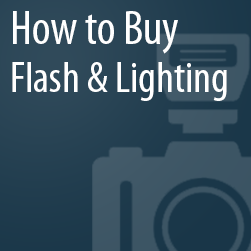 When you go shopping for flashes and continuous lights, it means you are determined to explore photography and get to the very core of it: light. Natural light is all around us, and to be honest, learning how to use isn't all that hard if you work enough. But creating your own light is a whole new level. We're going to guide you and help you make the right purchase.

First, let's have a look at the two major types of artificial light sources. Flashes and continuous lights. The later are divided into hot lights and cool lights, but we'll get to them later.

These are the choice of most photographers out there. There are two types of flashes: hot shoe flashes and studio flashes.

Hotshoe flashes , also known as external flashes, speedlights or flashguns are basically external flash units that go on top of your camera. They can be produced by the same company that made your camera, or they can be made by someone else from Asia, but still designed to fit your camera brand. Flashes built by the company that made the camera are optimized for working together. They usually have a lot of technology in them that can be very useful once you learn how to use them, but they can be expensive. Second party flashes are often a lot cheaper. They also feel cheaper and have only some basic functions, but at the end of the day they are equally capable of doing the job (bring light to your images).

Speedlights are battery powered so you can use them anywhere and they can also be used off camera, either with a built in system or via external triggers. 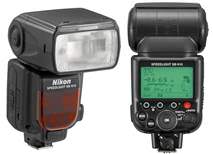 There are some disadvantages to hot shoe flashes. Their power is fairly limited, they have no modeling lamps, they take longer to recharge and the modifiers available for them are limited. They are however excellent for events and small scale photo shoots.

Studio lights on the other hand are a bit of a different story. Yes, they do the same thing, but the way they are used is a bit different. Studio flashes are usually made of three components: a flash head, a light stand and a light modifier, which can be chosen from a great variety, depending on the job. Studio lights are obviously bigger and heavier than hot shoe flashes, which makes them harder to work with on location. Most of them also depend on a power supply, but there are brands that offer rechargeable batteries for some of their models. 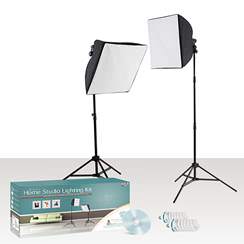 Other than that, studio flashes have considerably more power, their light can be heavily modified according to the needs of the photographer, they are faster and they have modeling lamps that enable you to see how the light will be projected onto the subject before the shot is taken. If you plan on opening photography business involved indoor or studio shots, these are your best option.

They are widely used in filmmaking and videography, but more and more photographers have started using them in the past couple of years. 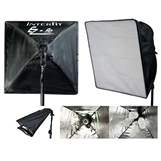 Hot lights, also known as tungsten lights, have earned their name because, well...they're very hot. The thing about them is that they actually seem a lot brighter than they really are. So if you light up a scene using one or several hot lights, you will notice everything looks a lot darker in your photographs. They are often used for short interviews and product photography, although larger objects require multiple hot lights. They're are fairly cheap so they're one way to go if you're just starting out, but keep in mind that accidents actually can happen because of the high temperatures.

Cool lights are usually better because they don't get as hot and are fluorescent. They can be used for far longer periods of time, and they somehow replicate daylight, although you shouldn't bet on a complete reproduction of natural light. One of the nice strong points of cool lights is that they can be used with flashes. However, just like hot lights, the power is far lower than that of flashes.