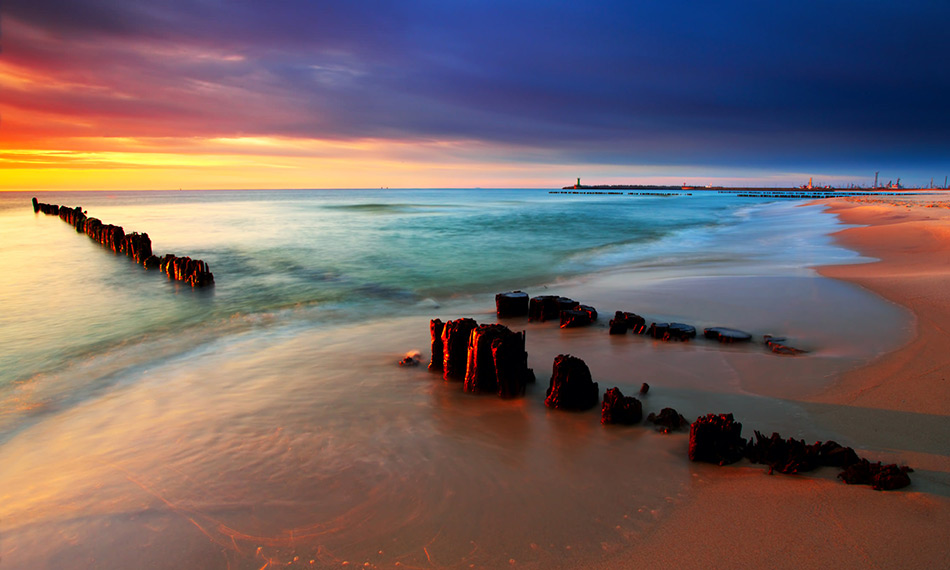 You can have the most stunning subject to photograph in the most gorgeous lighting, but if you don't take care to compose the shot well, no amount of good light and inherent beauty will prevent the image from being a dud.

There are plenty of photography composition tips to help you create a better photo. That's the good news.

The bad news - if you can call it that - is that it just takes a bit of practice to become adept at using a compositional technique.

What's more, it can get a bit overwhelming trying to decide which compositional techniques to learn, let alone which ones to implement.

Again, a little bit of practicing a handful of compositional techniques will help you determine what you like to do to give your photos a boost.

Let's take a look at 10 compositional rules that will help you create a more impactful photo.

Shoot Both Vertical and Horizontal 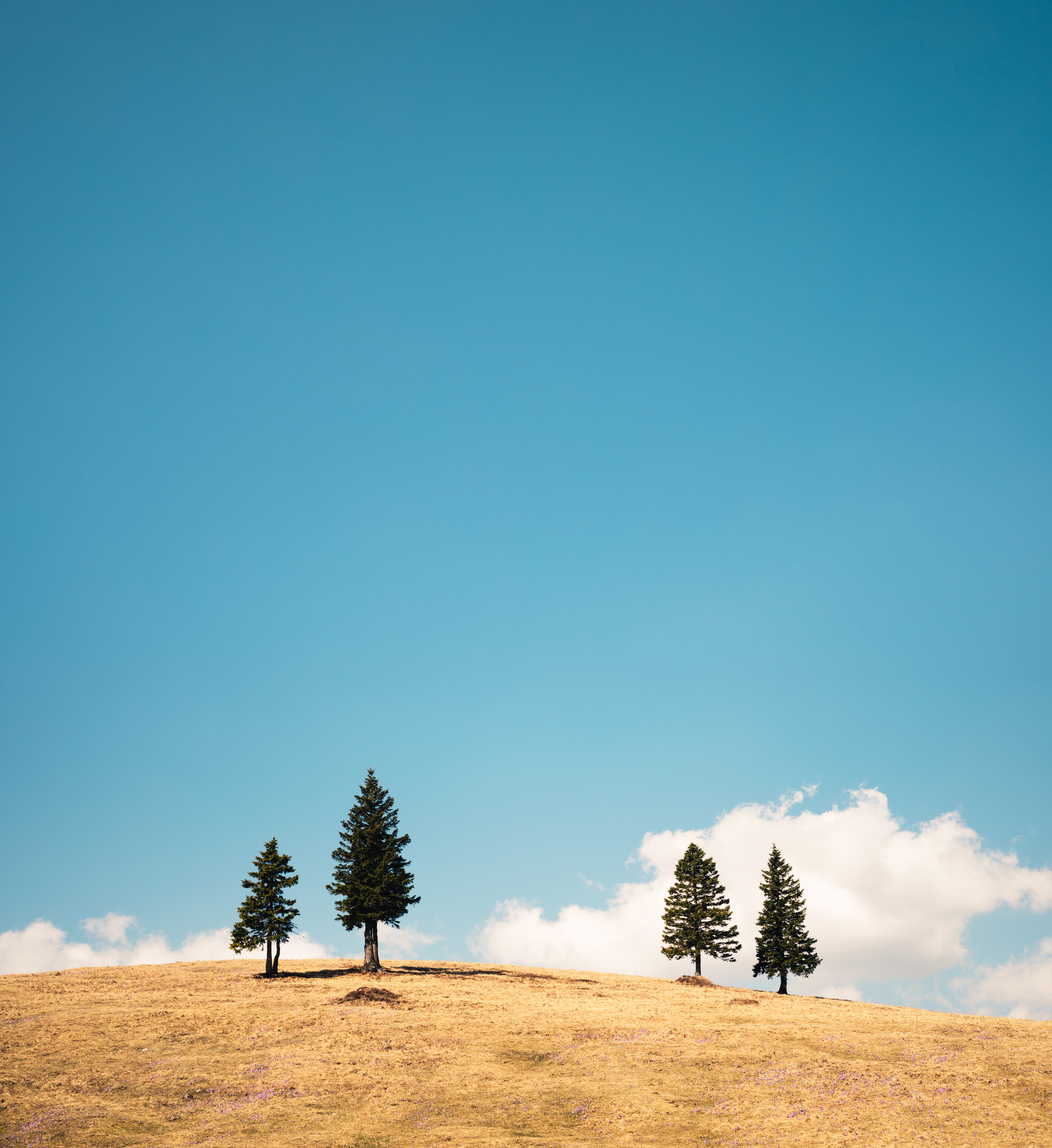 When I first started in photography, I noticed something about my photos when I reviewed them...

Virtually all my landscape photos were in horizontal format and virtually all of my portraits were in vertical format.

There's nothing wrong with that approach; it's just expected. In photography, you want to give viewers something unexpected!

When I started forcing myself to change the aspect ratio I used to take photos, I noticed that it required me to think harder about the shot.

What I found to be most helpful is to take both a horizontal and a vertical shot of the same subject, and then compare how they look and feel afterward. It really helped me to develop my eye for framing and composition and it will do the same for you. 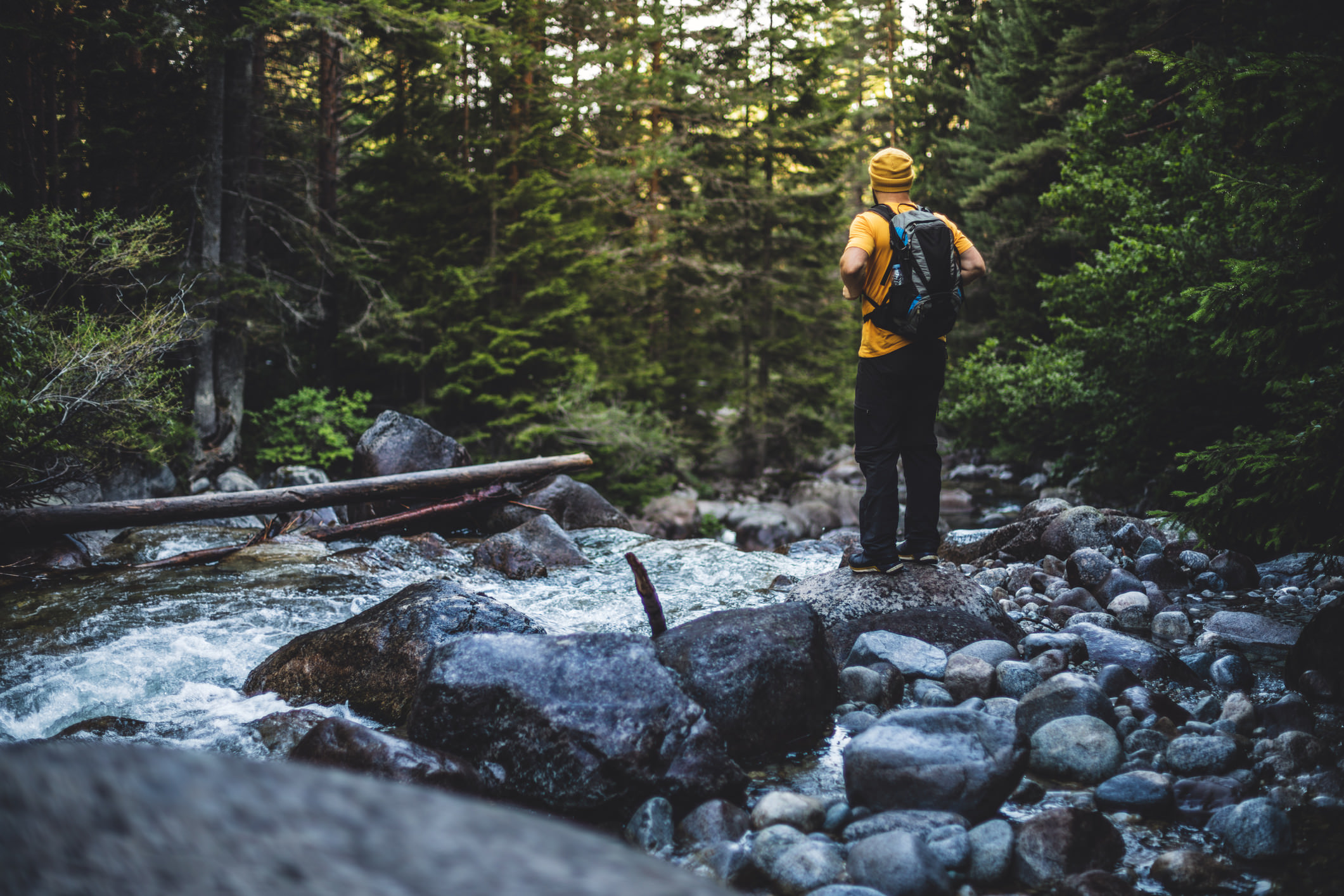 One of the most powerful compositional tools you can use, especially in landscape photography, is leading lines.

Leading lines are great because they help your viewers understand where they need to look in the photo.

Rather than their eyes wandering around the shot, a leading line will immediately grab their attention, allowing you to direct them towards the primary subject.

There are all sorts of lines you can use in a shot, from a roadway to a simple path to a fence or a wall.

But leading lines don't have to be so overt.

In the image above, the fallen tree on the left side of the shot points directly at the man. That kind of subtle leading line is highly effective, and viewers often won't even realize that their gaze has been influenced by something so nondescript. 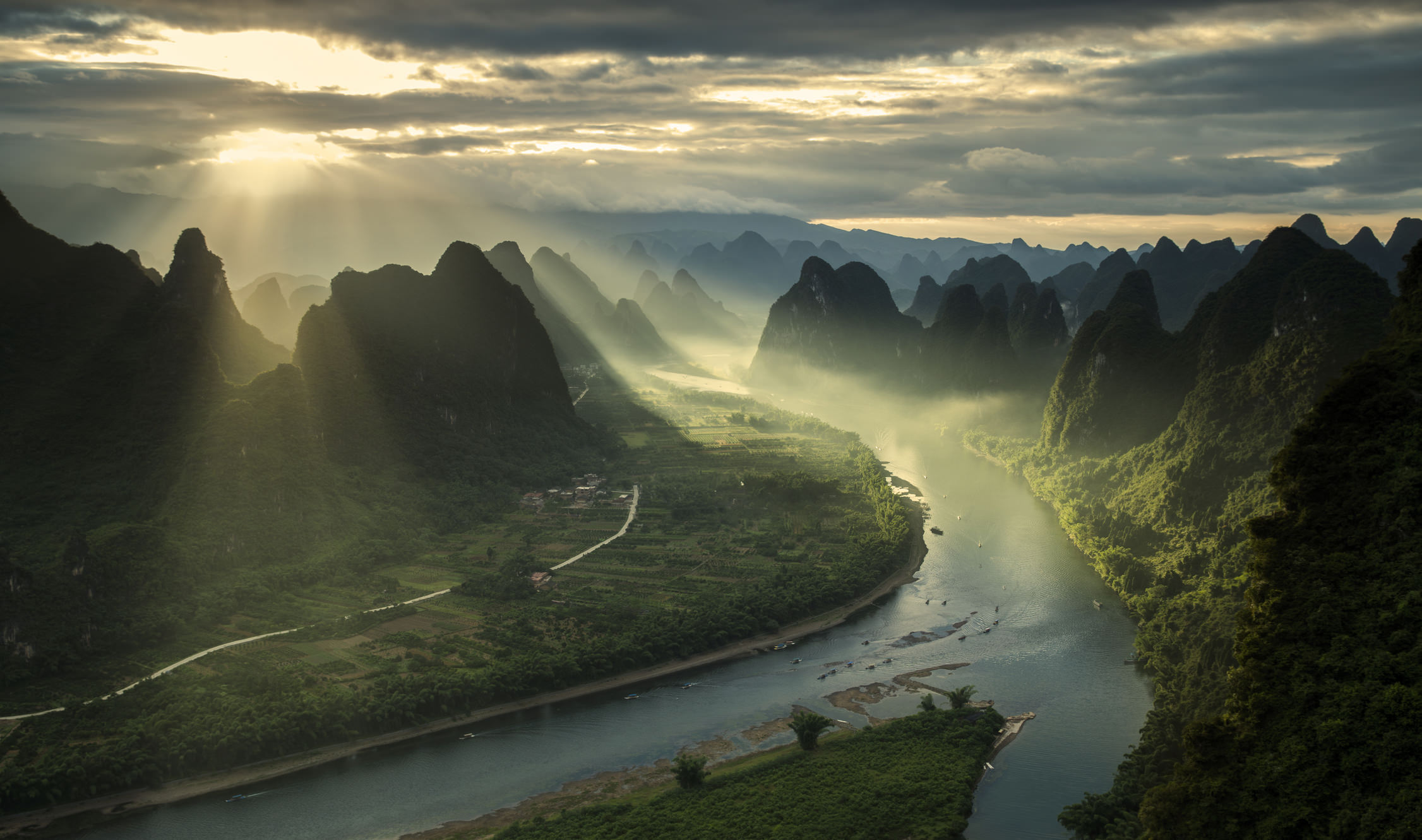 When thinking about your leading lines, it's natural to go right to using vertical and horizontal lines.

For something unexpected and dramatic, diagonal lines should be used.

In the image above, there's two sets of diagonal lines - the river and the beams of sunlight.

Note how both sets of lines add drama to the shot that wouldn't be possible if they were simply horizontal or vertical lines.

Instead, the horizontal nature of these lines helps widen and deepen the shot, as well as accentuate the mountain peaks through which they meander. 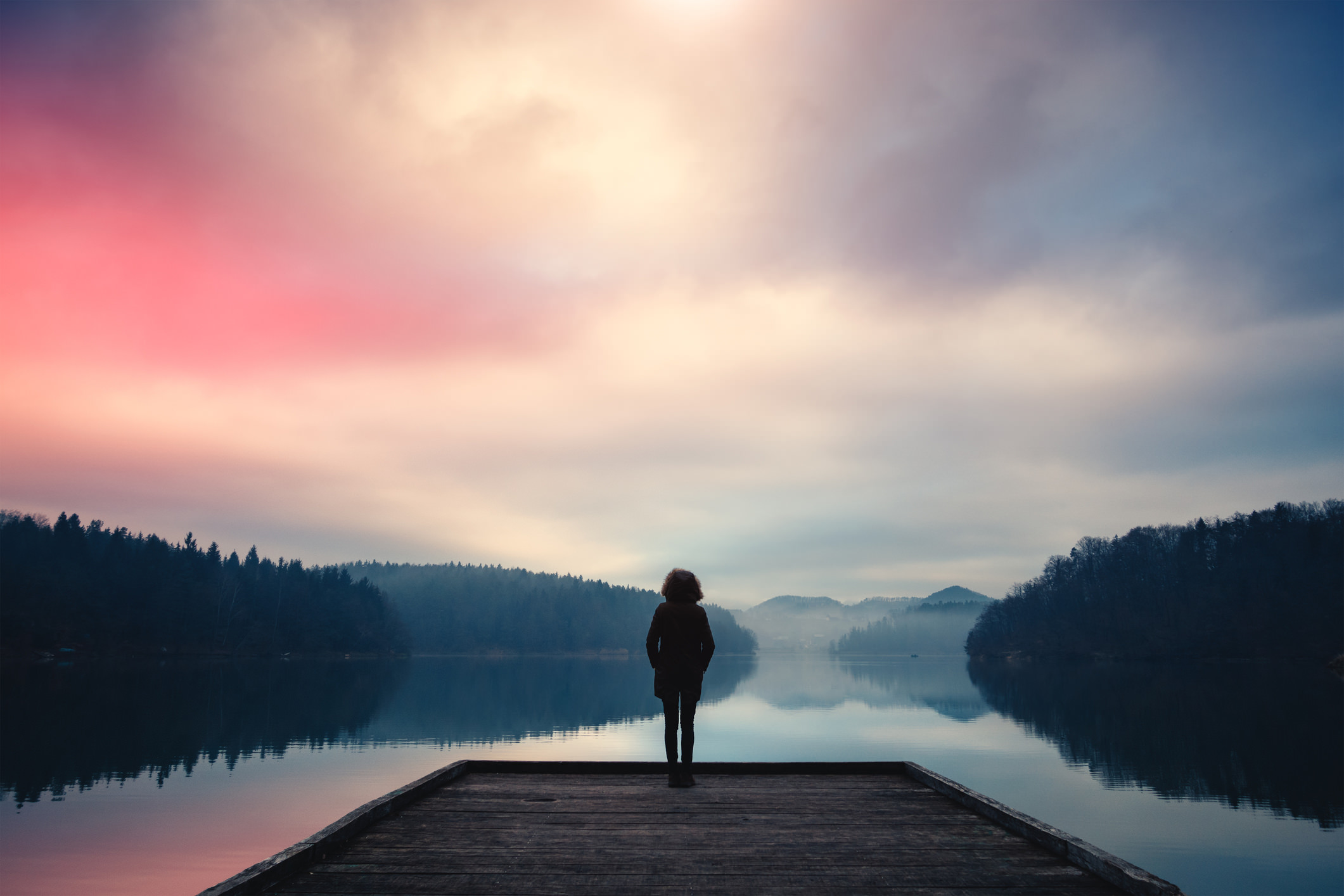 Very rarely in life is "more is better" a good idea. The same applies to photography.

Not only does simplifying the scene mean that there are fewer moving parts for you to get right, but it also gives the viewer a break too.

Rather than being distracted by a bunch of different elements, a simplified composition allows the viewer to engage more easily with the primary subject.

The question is, how do you simplify the scene?

As was done in the image above, select a strong subject - something that stands out in the scene because of its size, shape color, texture, and so forth.

Then frame the subject in a way that ensures viewers can't miss it. If need be, crop out other elements of the scene.

In this case, the woman is obviously the subject, but the colors and textures of the surrounding landscape contribute to a stronger composition but without distracting attention from the woman. 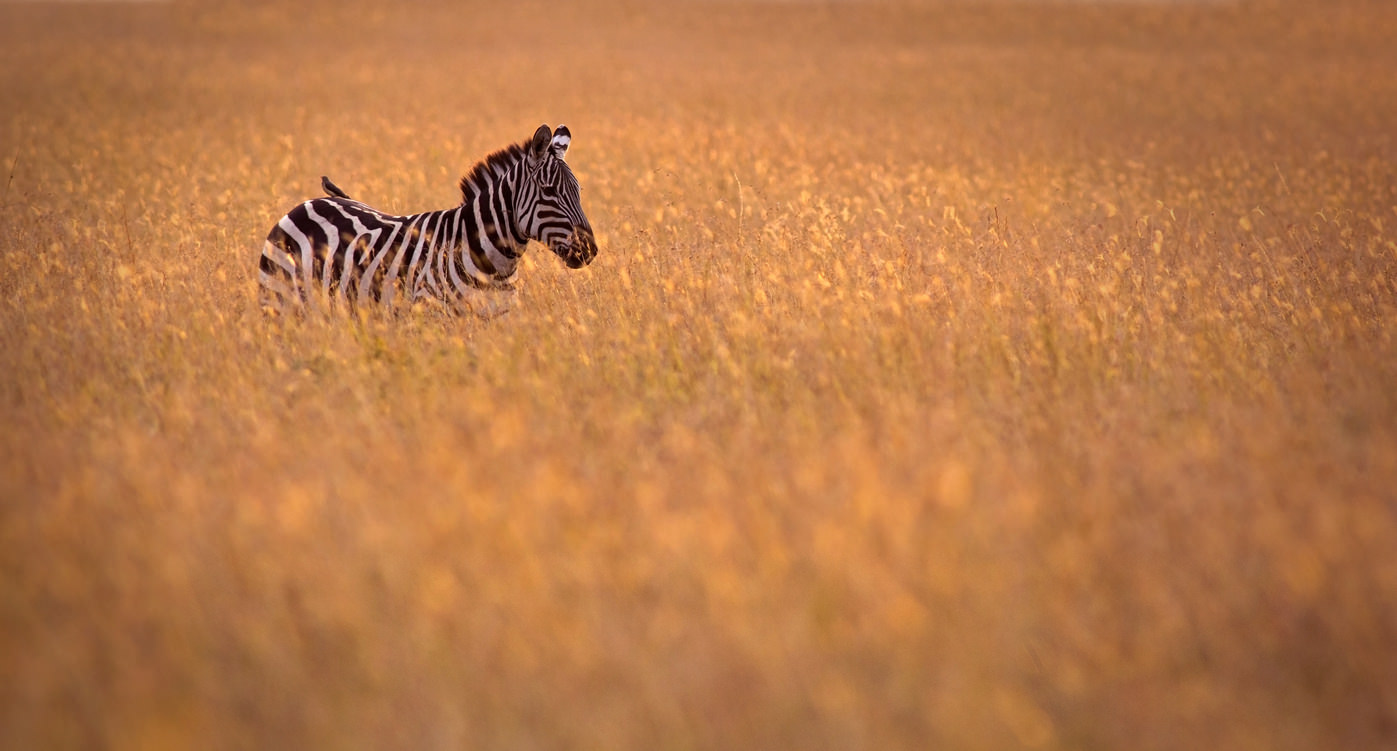 An easy way to create a more impactful composition (while keeping it simple as well) is to fill the frame with your subject.

Filling the frame gives a photo more impact because it eliminates all the clutter around it that might distract the viewer's eye.

What's more, filling the frame brings the subject to life, making it look and feel bigger in the shot, like the zebra in the image above.

There are several ways to fill the frame, including zooming in with your lens, getting closer to the subject by changing your shooting position, and cropping the image in post-processing.

In any case, filling the frame is a more unique way to compose a shot, and as a result, it will be immediately more interesting to view.

Think About the Background 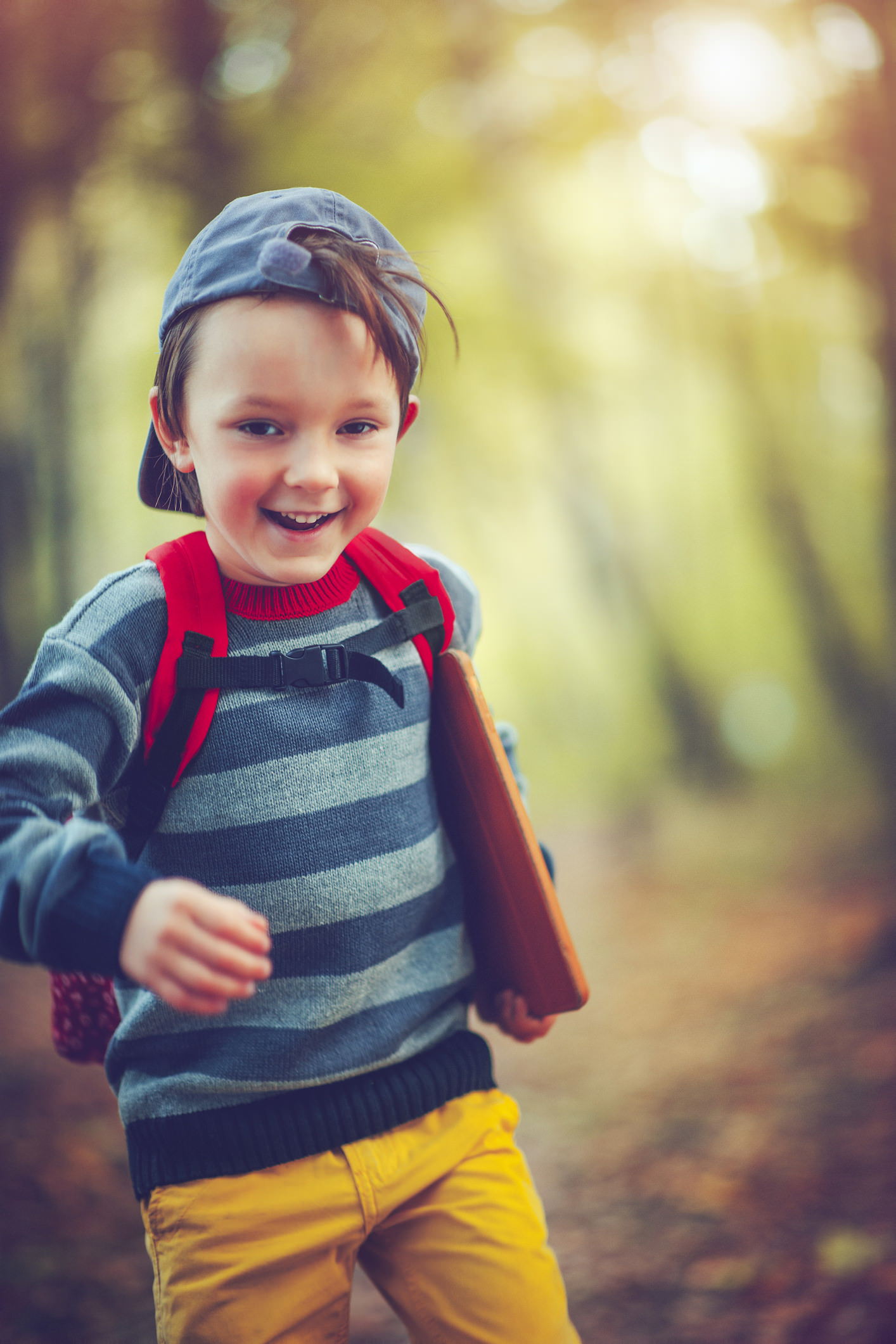 When you fill the frame as was discussed in the previous section, you rely less on what's going on in the background and concentrate more on the subject.

But sometimes, what's going on in the background can be highly visually interesting and help tie the entire image together.

Now, as we learned earlier, that doesn't mean you should overcomplicate the shot. Instead, simply think about how the background might add a bit of interest without distracting from the subject.

The image above is an ideal example of this.

Clearly, the boy is the primary subject, but by giving a hint of the background, we have a more interesting shot.

The forested landscape - even though it's blurry - gives context to where this photo was taken and what the boy was doing at the time.

In other words, the background helped to tell a more complete story about the boy, and that makes for a more powerful shot. 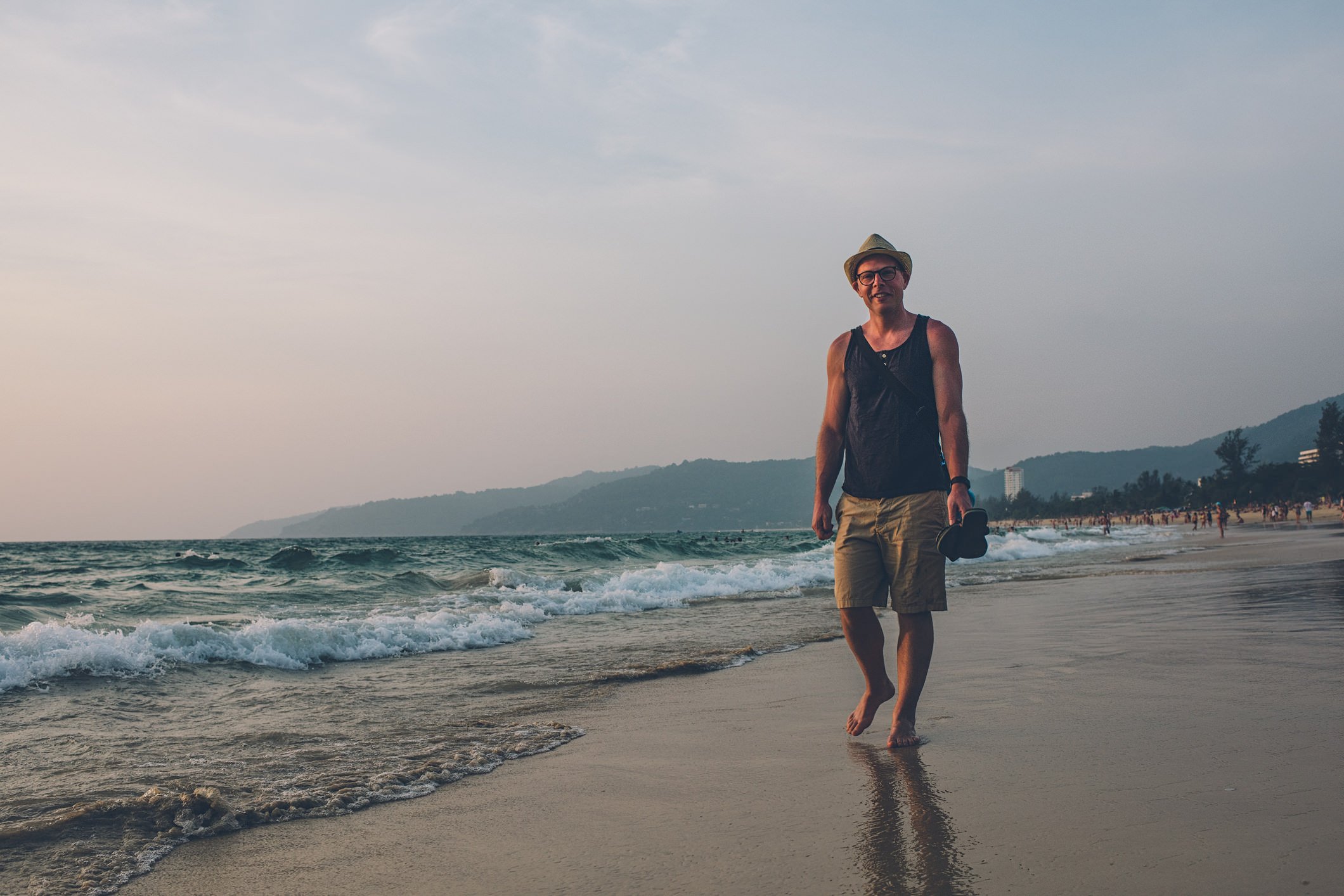 No list of photography composition rules is complete without mentioning the Rule of Thirds.

As you likely already know, the Rule of Thirds states that you should avoid putting your subject in the middle of the frame.

The reasoning is that having a subject in the middle creates photos that just aren't all that interesting with a static look and feel to them.

Instead, by dividing the image into nine equal quadrants and placing the subject to the left or right of center (or above or below center), you'll get a more impactful image, not unlike the one above.

But it's not just shifting the subject away from the center that makes this rule work. You still need to think about how it impacts the composition.

In this example, the texture created by the waves on the left side of the shot balance out the presence of the man on the right side of the shot. What's more, his positioning on the right helps give the sense that he can continue to walk toward our left, creating a more dynamic shot (more on that below).

Give the Subject Space to Move 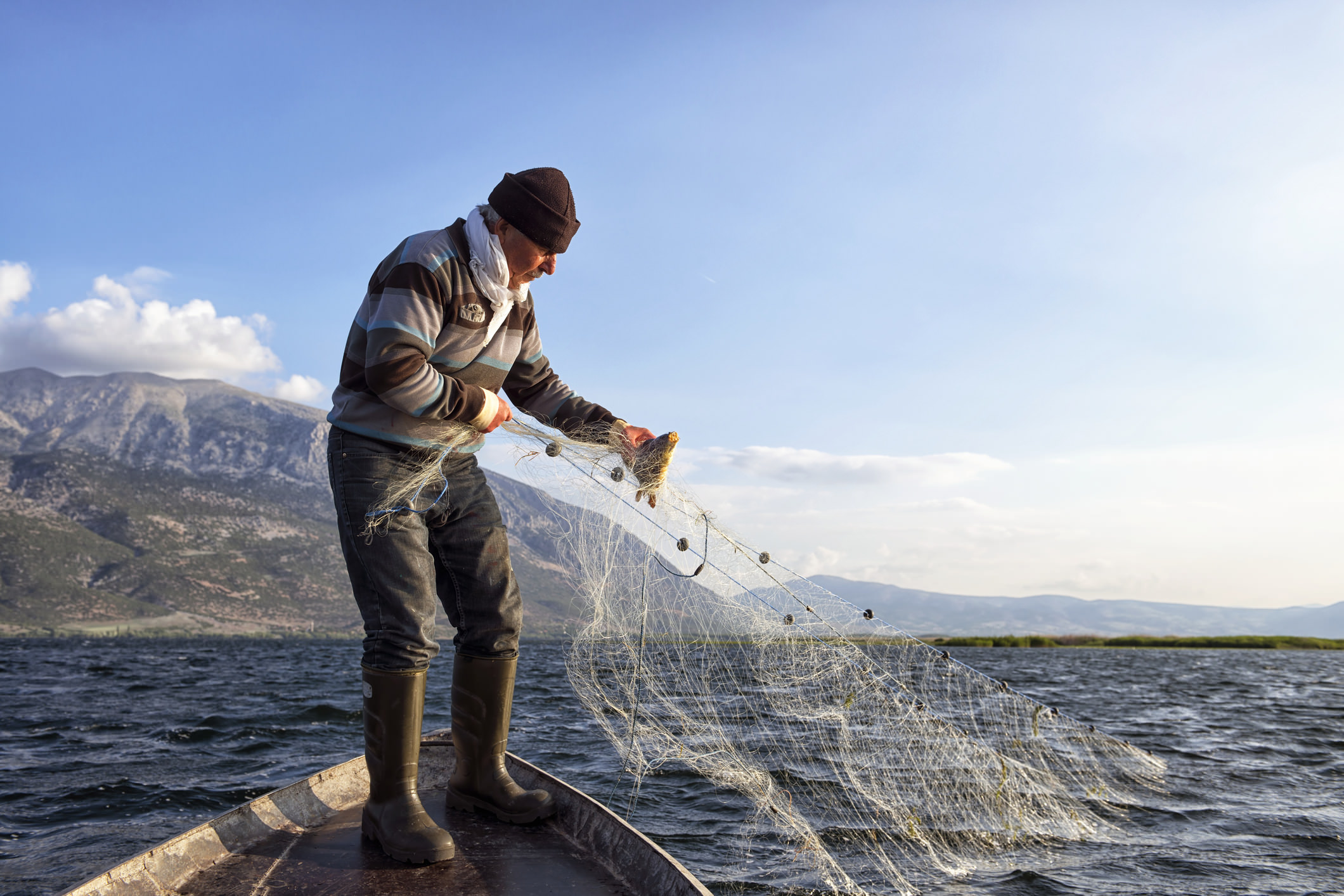 Even though photographs are static and two-dimensional, there are compositional tricks that help you convey a sense of motion.

One of the most impactful is to give your subject room to move into, such that the image has an implied sense of motion.

This trick is often used when photographing things like a running animal or a moving car - the subject is placed on one side of the frame with empty space in front of them.

This concept is illustrated in the image above as well.

Note how the man is clearly casting his net to our right. By shifting his position to the left, that movement has more impact and we're better able to imagine him throwing the net and reeling it back in.

Just imagine this shot had the man been in the middle or even on the right side of the frame. It wouldn't be nearly as dynamic or visually impactful, would it? 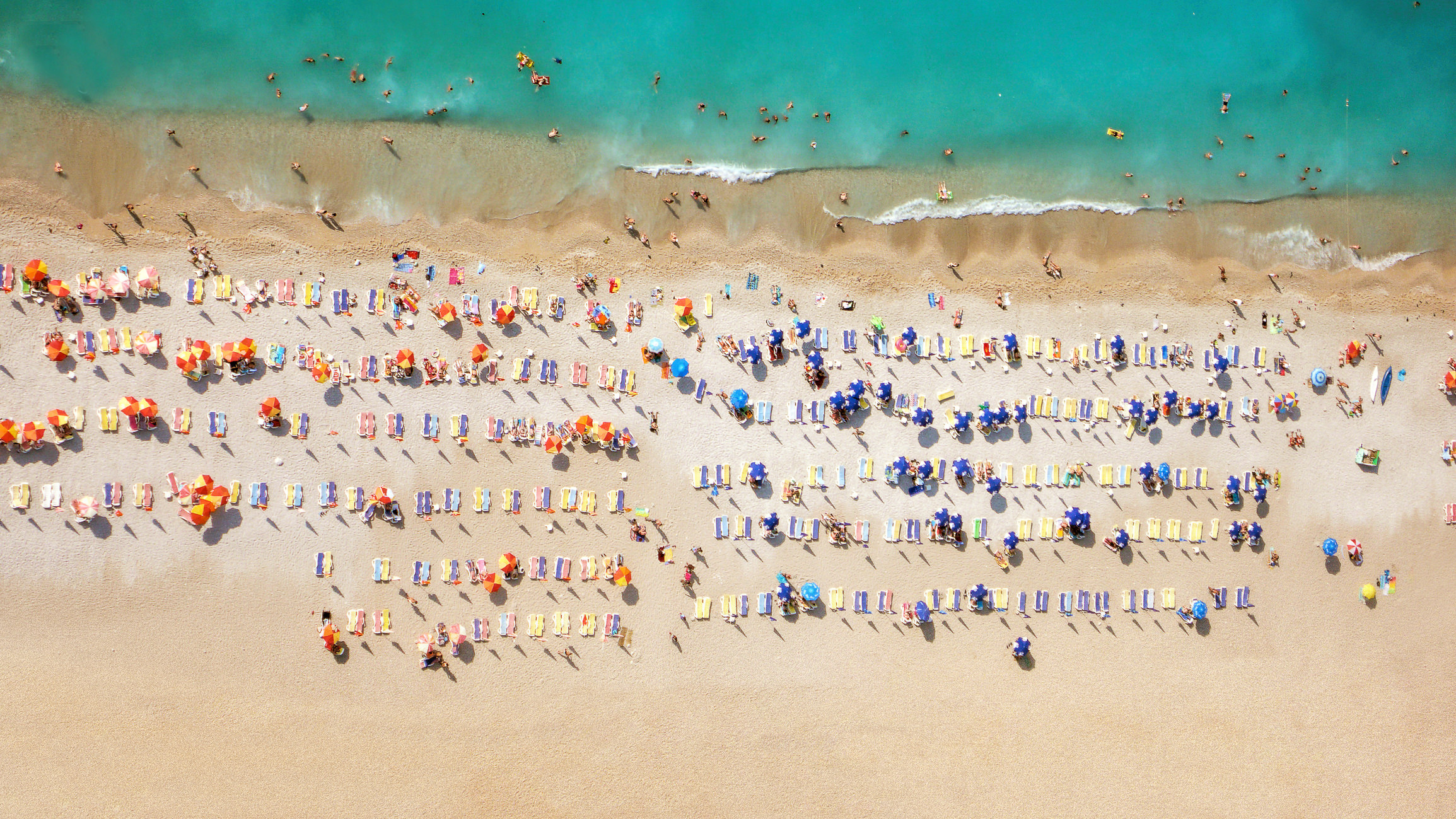 A difficulty that some beginning photographers struggle with is oversaturating the colors of their shots.

This is often done in post-processing and gives the image colors that punch you in the face and, quite simple, look fake.

However, this isn't to say that you can't use very bright colors effectively.

In fact, color is one of the tools you can use to draw a viewer's attention to the shot, and within the shot, to the subject.

In the image above, note how the pops of color of beach towels and umbrellas draw your eyes to the crowd.

This works well because the colors, though intense, are small enough that it doesn't become overwhelming to view.

If you're closer to the subject, fill the frame to limit the range of colors in the shot, again, to prevent it from becoming overwhelming.

Also look for ways to use complementary colors - orange and blue or red and green - as they go well together to create a more dynamic shot.

Get Comfortable Breaking All the Rules 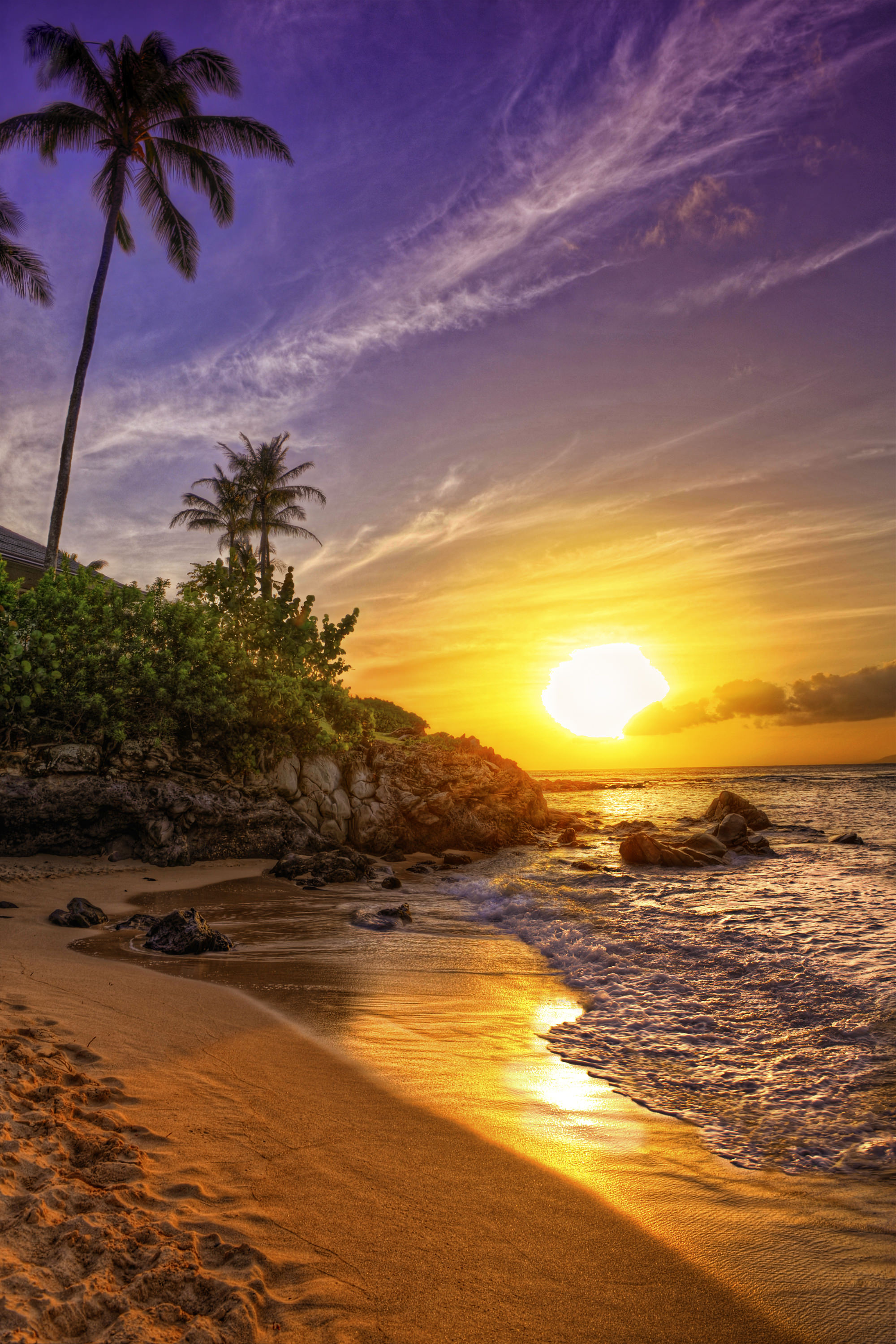 Photography is often about feel, and sometimes the best feeling you can convey in your images is to set the rules aside and go with your gut.

That means that sometimes you'll break the Rule of Thirds. Sometimes you'll use a ton of very bright colors. Still other times you won't include any leading lines in your landscapes.

The key to your success is to learn and practice the rules outlined above, that way you can create more compelling photos.

The next step after that is to learn to recognize when the rules just aren't working, that way you can break them in a purposeful manner and still get a gorgeous shot.

Have a look at these and other photography composition rules in action in the video below from COOPH: