Photography Tip—How To Capture the Beauty of a Rainbow 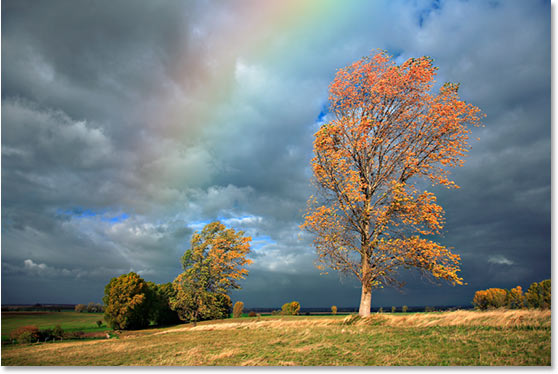 A rainbow is an excellent digital photography challenge, especially for hobbyists and enthusiasts that want more experience shooting photos of such natural phenomena, which also include the moon, an eclipse, waterfalls, etc. Like many of these natural occurrences, a rainbow is an elusive subject matter. It can suddenly appear and disappear just as fast. Change your angle of view and it becomes invisible. Know how to expose and compose a rainbow photo correctly and your photo buddies will be envious. This PhotographyTalk.com article presents a number of tips and techniques that will help you capture this wonder, even if there is no pot of gold at the end.

Few objects are more difficult to find than a rainbow; and, even when you do, it may not remain in view for enough time to position yourself and your camera for many photos. You must work fast! A true rainbow is both optical- and weather-related. They are commonly seen during the transition from cloudy, rainy weather to a partially sunny sky, as the weather exits the area. The rainbow must be in that part of the sky directly opposite the sun. A rainbow is a visible representation of the light spectrum, which occurs as the sun casts light on the moisture still in the atmosphere from the passing weather.

Since a rainbow is actually a trick of the light and water droplets, what you see is quite insubstantial; it’s not tangible. The best kind of background is dark and free of clutter. If you come upon a rainbow at the right angle and time, it is often positioned against the dark clouds of the weather that is passing. That’s generally the most spectacular rainbow picture. An alternative is to change your angle of view to bring the rainbow in front of a dark background; but be careful, move too much and the rainbow will disappear. Another option is to find and photograph a part of the rainbow with the best background available.

Rainbow photos are of little interest unless you take into account its surroundings when you frame and compose your images. You want those dramatic storm clouds or tree-filled mountain slopes in the background, with a river flowing across the frame in the foreground or a lake in which you also capture a reflection of the rainbow.

You might have to find and photograph many rainbows to take those kinds of images, but if you keep these three tips in mind, you’re more likely to be ready to take advantage of any opportunity.

Placement: Composition guidelines, such as the rule of thirds, are just as applicable to rainbows as any other subject or object. Placing the entire arc of the rainbow in the exact center of you viewfinder will probably not be as interesting as showing part of it in combination with other objects.
End Points of the Rainbow: Generally, what attracts many people to rainbow photos is seeing one or both end points on the ground. This is a real challenge unless you spot a rainbow in the country and have an unobstructed view. If you’ve ever seen a rainbow in the city, then you know the end points are not usually visible because of buildings, etc. If you do have a clear view of the ends, then include them in some of the photos you take, or zoom in closer.

Lens Angle: Rainbows seem to have been created especially for a wide-angle lens. With that perspective, you can certainly compose some unique images. Try a telephoto lens too, if the rainbow remains visible for enough time to change lenses.

Other Rainbow Photo Tips
Use a polarizing filter to create different effects, such as color saturation, reflections and contrast levels. These make a rainbow appear more substantial and separate it from the background.
It’s best to select as small a lens aperture as conditions will allow, so your photos will have the most depth of field.
If you happen to have your tripod with you, then it’s a better platform to capture very sharp rainbow pictures than handholding your camera. The combination of low ambient light, a polarizing filter and small aperture will translate into a longer shutter speed, so a tripod will be a big help.

Finally, like those other natural phenomena mentioned in the first paragraph of this article, rainbows don’t occur on a schedule. You must be in the right place at the right time, and with the right digital photography equipment. Great rainbow photos are part luck and part patience.

Also Read: 23 things you must know to be successful in photography