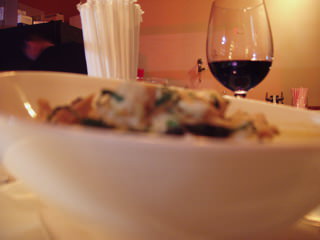 If you’re a dedicated “foodie” or someone that enjoys an exceptional meal at a high-class restaurant—and a digital photography hobbyist—then there are many opportunities to shoot pictures of your restaurant experiences. Food has always defined the world’s cultures, but now interest in exotic and strange dishes (at least to those who haven’t eaten those foods their entire lives) has exploded. If you consider food as an adventure or one of the primary elements that bring people together, then you’ll want to read and use the tips and techniques in this three-part PhotographyTalk.com article.

Part 1 focused on the importance of planning, especially if you’ve targeted a restaurant that you are excited to visit, and taking a series of photos that tell the story of the restaurant and your experience there. Part 2 noted the interior elements to photograph that also define a restaurant. Then, there were additional tips for how to photograph kitchen and food preparation and the staff. Part 3 concludes this series with an explanation of how to approach other patrons for pictures and finally, the food, which is what probably attracted you to the restaurant initially.

The patrons have come to the restaurant for most of the same reasons as you: to enjoy the atmosphere and the food. They may not wish to be photographed. Again, you need the permission of the manager and the patrons you want to shoot before you just starting tripping your camera. Maybe, the best times to shoot patrons are when they are entering or leaving the restaurant instead of during their meals. A fashionably dressed couple at the entrance under low light could be the perfect subjects that, in combination with the exterior décor, help to define the restaurant. Ask someone leaving the restaurant to show you how much he or she enjoyed it, with a gesture, e.g., rubbing the stomach, etc.

Finally, the primary reason most people are attracted to restaurants. Don’t expect to capture images of food like you see on the cover of cooking magazines or during TV food programs. That requires years of experience, a specific array of equipment and a controlled studio environment. You can still take some lip-smacking pictures of food on your table, however.

First, ask for a table next to a large window, with plenty of sunlight streaming onto the table. That natural daylight is the best lighting conditions for photographing food and reflecting their fully saturated colors, especially when you have limited equipment and time. A flash unit is not a good light source, as it often flattens the image and mutes the colors. It may be your only option, however, if there are no windows and the lighting in the restaurant is purposely kept low.

Make sure to photograph the food from more than one angle. From your perspective, with it in front of you, is certainly the obvious angle; but also stand for a higher angle, even trying to be as much overhead as possible. Remember to shoot at a smaller aperture to create as much depth of field as you can. Then, take the opposite tack and move in close, purposely narrowing the depth of field, so you can focus on a single item on the plate, with the remainder pleasantly blurred in the background.

Don’t hesitate to order food and beverages that will make the best photos because they compliment each other, such as a rare steak and a glass of red wine, or a big frothy mug of German beer and juicy bratwurst. Ask for a bit of colorful spice to sprinkle on your food to create contrast, such as paprika, red pepper or fresh green herbs.

Every restaurant experience is an event to enjoy, but you’ll continue to develop your digital photography skills if you also approach those experiences as mock photo assignments. You’ll also capture much more interesting memories.