How To Photography Tip—Framing with a Frame with Bryan Peterson

One of the surefire ways to make an image more appealing is to introduce foreground subject matter that calls attention to, and frames the main subject in the background. This technique is often referred to as 'framing with a frame'. To do this successfully, you can't use a foreground subject/frame that distracts the eye. Additionally, you should ask yourself the following: If I remove the foreground subject, would I miss it? And, will the frame enhance the overall composition? If the answer is "no" – if, for example, the foreground frame dominates the composition or is more of a distraction than a complement – then the framing is not successful. At a bird market in Singapore, I saw this one bird cage partly covered by well-weathered newspaper which was also serving up a healthy dose of 'framing with a frame'. With my camera and 80-200mm lens on a tripod, I set the focal length to approximately 180mm. The converging diagonal lines formed by the paper and the frame force the eye to the main subject, the birds in the cage (below, left). (Nikon F-5 80-200mm lens at 180mm, 1/250 sec. at f/8, 100 ISO)

There's probably no better example of a picture window than in Arches National Park in Utah (above, right). I, like so many other photographers before me, took the trek to Window Arch, arriving at dawn to shoot the obvious frame-within-a-frame composition. (Nikon D2X, Nikkor 35-70mm f/16 at 1/160 sec. 100 ISO) 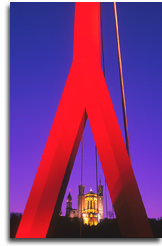 One of the many suspension bridges in Lyon, France is composed of two large deep red metal struts, one at each end. On the east end one can look to the west and frame the Fouvrier Cathedral that sits atop Old Lyon. With my camera and 35-70mm lens on tripod, I set my aperture to f/22 and then with the lens pointed to the dusky blue sky, I adjusted my shutter speed until three seconds indicated a correct exposure. I then recomposed the scene you see here and with the camera's self-timer set, I pressed the shutter release and this is the resulting image. (The reason I use the self-timer with 'long' exposures is simply to avoid any contact with the camera during the exposure time. I don't want the risk of any camera 'shake' since sharpness is paramount most every time I record an exposure. (Nikon D300S, 35-70mm, f/22 at 3 sec. 200 ISO) 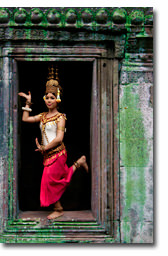 Framing with a frame is NOT limited to the use of foreground subject matter. Sometimes its as simple as finding 'that' opening and placing your subject inside 'that' opening. Such was the case when I visited the ruins in and around Angkor Wat, Cambodia last fall. I had hired several young dancers, after meeting them at a performance they gave the night before at a restaurant in the town of Siem Reap. (Two dancers for one hour, for $100.00 – such a deal!)

As soon as I spotted the opened doorway I instructed one of the dancers to strike a pose in that doorway and again, the doorway serves up a healthy dose of framing with a frame. (Nikon D300S, Nikkor 16-35mm, f/11 at 1/90 sec 200 ISO)

Effective and successful composition relies heavily on the idea of containment. We've all seen milk spill across a table. I'm sure we would all agree that most of the time, milk looks much better when it is contained, when it is in the glass. And like milk that is contained in a glass, framing with a frame is a sure-fire way to contain and MAINTAIN the audience's attention.