With the introduction of digital cameras, many of which will shoot black an= d white images (well, JPEGs at least), it seemed as though this problem had been at least partially overcome: you could shoot an image and get immediate feedback on your LCD screen. On the face of it then, this sounds like a good thing - it should speed up the learning process - but it's the very worst thing you can do.

OK, so why is this such a problem?

There are two main reasons. First, shooting JPEGs rather than RAW images is never a good idea: they're lower quality, can't be edited as easily as RAW images, don't allow you to recover lost highlight detail, and so on. Second= , the way in which your camera creates a black and white image is very simple - it just strips out the colour data, creating a black and white image base= d on the average luminance values for each pixel. Sometimes this can result i= n a good image, possibly even a great one, but - once you understand how to create and manipulate black and white images during post-production - your chances of producing great images will increase dramatically.

So, let's take a look at one method of converting your images to black and white in Photoshop: the Channel Mixer.

Before we begin our discussion of this tool, take a look at the following three images. The first is the original colour image, while the second and third were both converted to black and white in Photoshop: one using the Hue/Saturation tool to simply desaturate the image (this is roughly equivalent to how the image would look if I had shot a black and white JPEG from the outset), the other using the Channel Mixer. Take a moment to think about i) which of the two black and white images looks better, and ii) why you think it's an improvement. 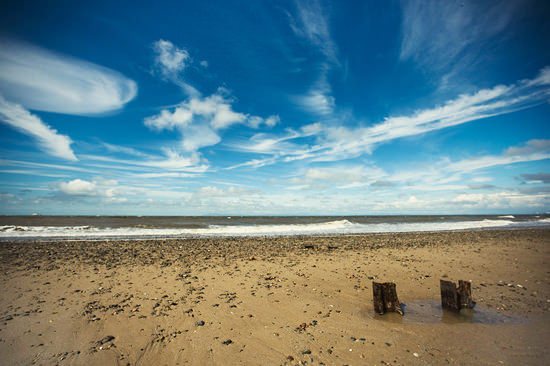 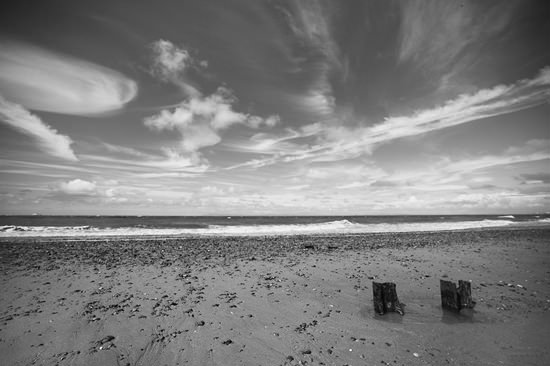 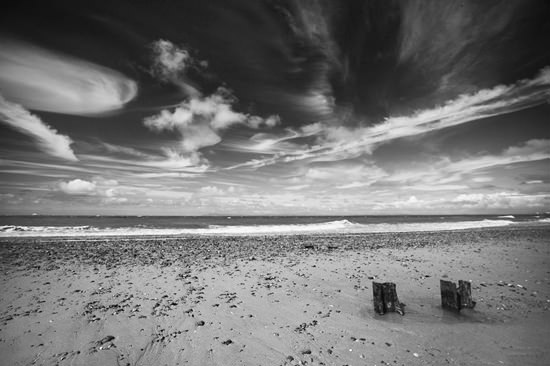 At this stage I'm hoping that you thought that the third image is the better of the two black and white versions: the foreground is brighter, the clouds really stand out against the darker sky: in short, it's a more dramatic image. This is the version that was created using the Channel Mixer.

So how does the Channel Mixer differ from the Hue/Saturation tool?

To desaturate an image using the Hue/Saturation tool you just drag the saturation slider all the way to the left. This simply removes the colour data. 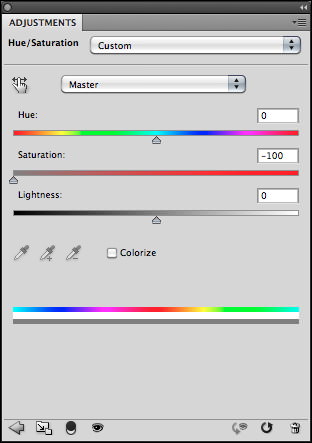 The Channel Mixer is more complicated, but, as you will see, it's also much more powerful. To use the Channel Mixer to create a black and white image you first need to select the Monochrome button. 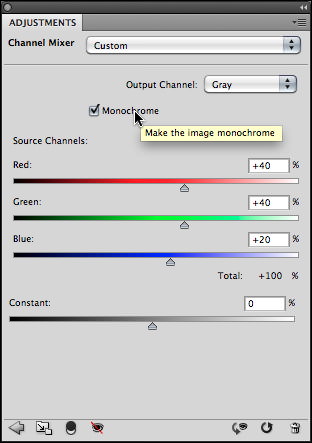 Once you've done that you can vary the three sliders - Red, Green and Blue = - to alter the tonal balance of your image by varying the contribution that each of the RGB Channels makes to the final image. If you're already familiar with RGB Channels and how they work, skip the next two paragraphs, if not, read on.

So, what are Channels? In Photoshop, take a look at the Channels palette (Window -> Channels). What you will see is the RGB composite image at the top - this is the original colour image - followed by the Red, Green and Blue channels. Each of these channels determines the contribution that each colour makes to each pixel within the image, such that when combined they collectively describe the RGB values for each and every pixel within an image. More importantly though, we can use the data in each of the channels to change the way in which we convert our image to black and white. 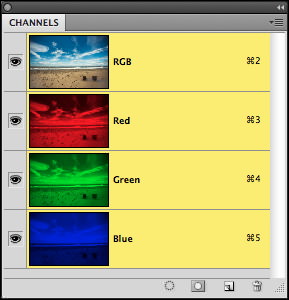 To simplify things, let's take a look at another feature of the Channel Mixer: the preset 'filters' dropdown menu. 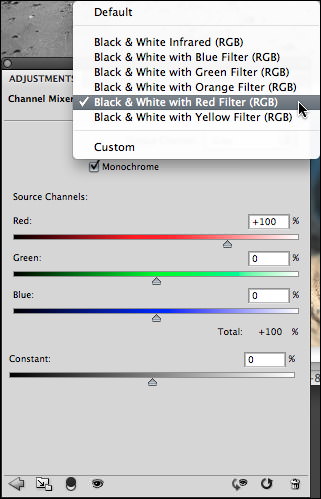 As you can see, I've selected 'Black and White with Red Filter (RGB)', and the sliders have changed their position to +100 for Red and 0 for both the Green and Blue channels. What this means, in practice, is that the black an= d white conversion will be biased towards the red channel, i.e. areas that contain a lot of red tones in the original image will be brighter, while areas containing a lot of blue and/or green will be darker. This was the setting I used to create the Channel Mixer version I included above, the second of the two black and white images. By biasing the conversion in this way, the foreground has become lighter (sand is more red than it is green o= r blue), and the sky has become darker: the blue is blocked by the red filter.

So, in this instance, using a the Red Filter preset has produced a much more dramatic image, but we could also alter the sliders manually - setting exact values for the contribution that each channel should make to the final image - or we could use a different preset. For example, here's how the image would look if we used the Blue Filter preset. 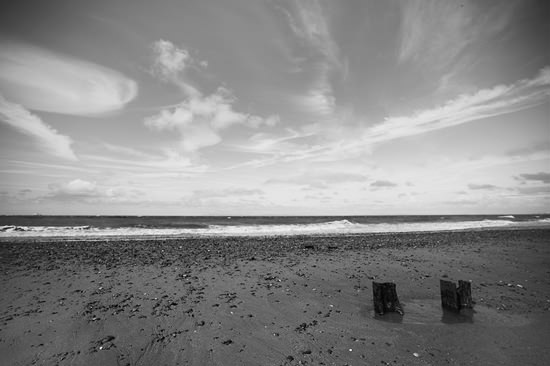 In this case the conversion is biased towards the Blue Channel: blue tones have become lighter, while the red and green tones have darkened. From an aesthetic point of view it looks terrible - the sky is washed out and lacks detail, and the sand is very dark - but it does demonstrate the power of this tool to radically alter the appearance of your black and white image i= n a few easy steps.

Here are a couple of further examples of how the Channel Mixer can be used to produce much better results than either shooting in black and white or just desaturating an image using the Hue/Saturation tool. 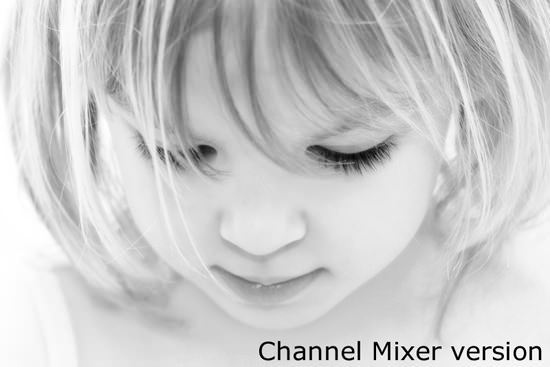 The above image was converted by biasing the conversion towards the Red Channel, using the same settings I used for the shot of the beach. In this instance, as you can see if you compare it to the Hue/Saturation version below, my daughter's skin tones are now brighter and more uniform. As a consequence the Channel Mixer version is a considerably more striking image. 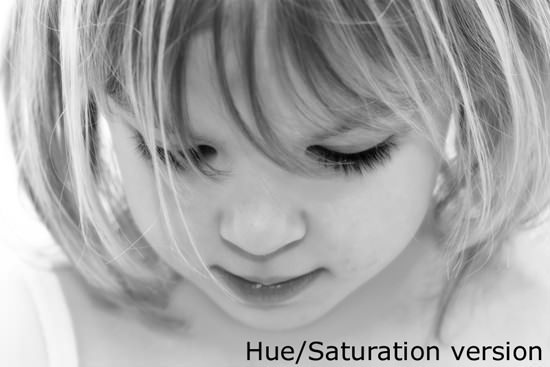 For the final example, reproduced below, I manually varied the Channel sliders: Red +50, Green -50, Blue +100. The net effect, as you can see if you compare the Hue/Saturation version to the Channel Mixer version, is that my daughter now stands out from the background. The reason for this is that the foliage behind her was mostly green, so by lowering the contribution of the Green Channel I was able to darken this area of the image. 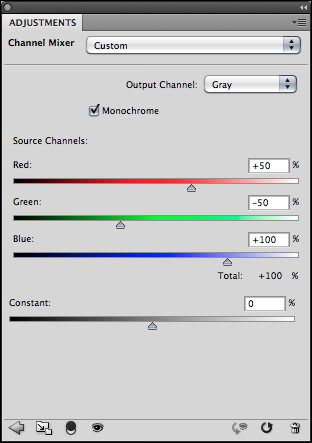 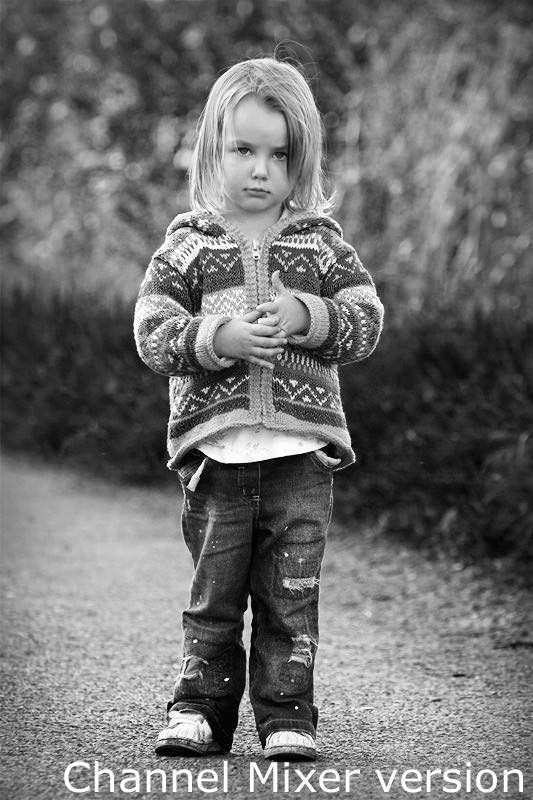 At this point, even though the above was just a brief introduction to the Channel Mixer tool, I would hope that you can begin to see the benefits of learning more about how to convert your images to black and white: it gives you much more control, enabling you to produce images that meet your creative expectations.