It was during the mid-80's and through the mid-90's that I found myself on assignment, shooting a number of annual reports for both FORTUNE 500 companies and the not so fortunate 500 companies. Much of my work back then focused on what I affectionately called, Hard Hats with Soft Hearts or what was commonly known as the Blue Collar Industries e.g. oil, gas, coal, hydro, ship repair, construction, steel plants, foundries, lumber mills, and silver and gold mining.

Shooting silver and gold mines often took me to some fairly remote and often harsh locations. The goldmines of Colorado, Idaho, Nevada and California looked not much different then the goldmine atop the 14,000 foot mountain in Bolivia or the 2,400 foot- underground goldmine in Santa Barbara, Brazil; MUNDANE would be the best word to describe most goldmines, at least on the surface. Since most of us are drawn to a landscape that is teaming with life, both flora and fauna, the normally mundane rocky, sparse, dry, desert like landscape where most gold is found gets little of our attention, unless of course we are prospecting for gold. Gold is thought by many to be a prized commodity and considering its price of late, topping off at $1,700 per ounce, I would agree, but gold, like so many other precious metals, is not readily found or seen by the masses. Making the choice to go looking for gold is the easy part. Mining for gold is the hard part!

And just like real gold, mining 'gold' images seems to be a goal shared by most photographers, yet some of the finest gold to be mined is often over-looked, because, just like real gold, these images remain 'buried', hidden from view in some truly mundane locations. The terrain where one can find these golden opportunities is often comprised of broken down cars, scarred sheet metal, retired crab pots, broken glass, banged up bicycles, rusty old water heaters; a terrain that is strongly associated with "an eyesore!"

I believe that every junkyard, second-hand store or wrecking yard, the "eyesores" as they are often called, are teaming with "flora and fauna". I am convinced that the path towards successful composition must include several trips to the mundane and preferably early in one's photographic career. No other location you could ever shoot in, will serve to affirm my belief that every successful image is first and foremost about the arrangement and NOT the content.

Most of my photography workshops will include several hours (or, if the students are 'lucky', an entire day) spent shooting garbage e.g. a junkyard= , an auto wrecking yard, the banged up sides of a 40 yard dumpster or an alleyway where there really are no shortage of plastic trash bags. During the entire time spent at these locations the students are strongly encouraged to use their macro lenses or a close-up filter such as the Canon 500D or extension tubes. The goal is to create "nothing more than compelling arrangements", and in doing so, the eye/brain is free from the often constraining "need to know what I am looking at so I can photograph it the 'right way'! (Again, it is not about the content, it's about the arrangement!)

It is in these mundane locations where the two most common arrangements in all of photography can be learned and applied time and time again; the rule of thirds and the need to fill the frame. It is here where the eye/brain is awakened, liberated from the prejudice of what constitutes a "beautiful image"! It is here where the repetition of these two most basic of composition fundamentals is applied and affirmed. Now that the eye/brain has been awakened, it is not surprising that it has this insatiable appetite for even more mundane.

If my hunch is correct, you will share the same reaction as Danielle , a student who took a workshop with me in Provence during the summer of 2011. "I was dreading the trip to the junkyard that Bryan had planned for the class. My God, I was in France, the first time in fact and here I was about to spend several hours in a junkyard! But when it was over, I felt like all of the other students-I didn't want it to end! I didn't want to leave! Not until then did I realize how much beauty there is in the ugly or mundane."

While literally standing in a small pile of trash, I noticed at my feet several small pieces of broken glass from what I gather was once a windshield of a car. Reaching down, I picked up one of those pieces and as I held it up the sky the irregular pattern of the lines, vein like, reminded me of the Human Body Exhibit I saw recently, particularly the nervous system. Just a few feet from me, I noticed some garbage, an empty case of Old Milwaukie Beer along with the Old Milwaukie girl. It was than that I thought, what if I place the broken glass over the Old Milwaukie girl...I was quick to do just that and as you can see here in this simply idea, the marriage of two pieces of discarded waste have become one mighty interesting composition! It is an image of lines, color and shape, culminating in an unusual 'portrait'. * 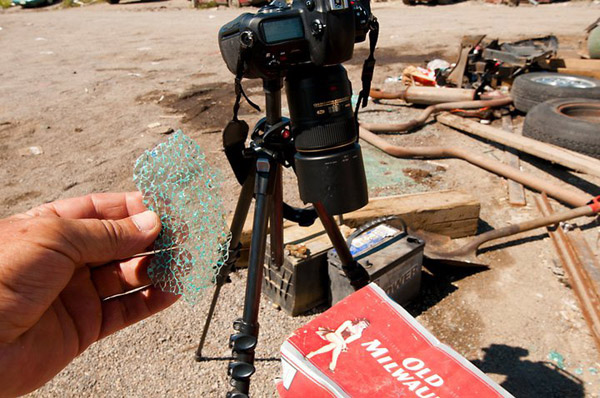 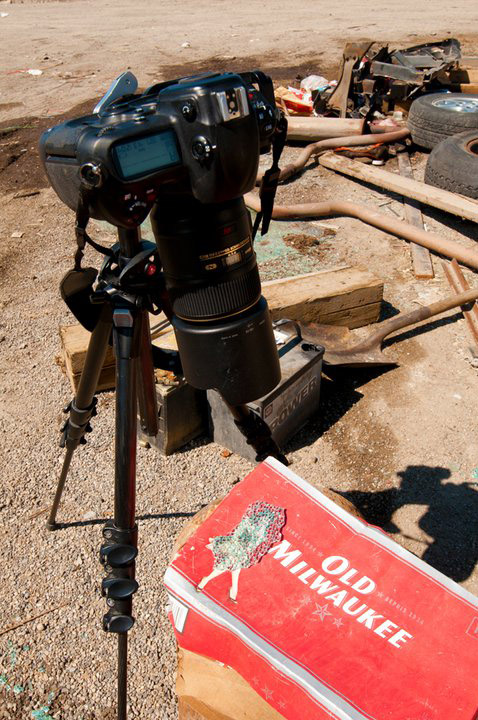 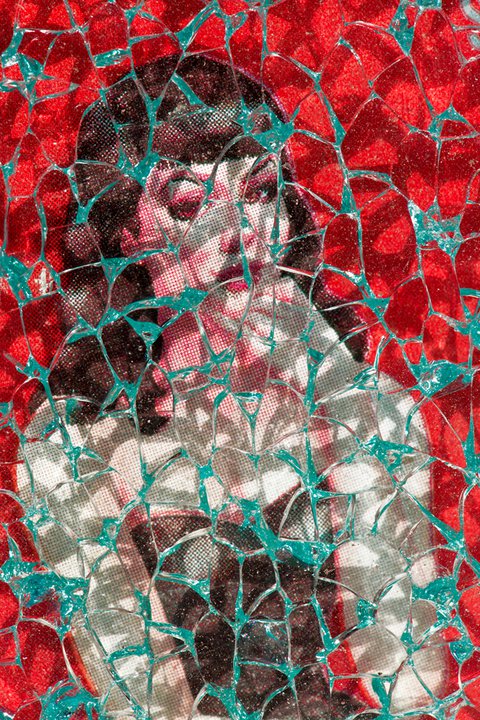 What do you get when you hold various brightly colored pieces of waste against the side of a deeply scratched refrigerated trailer? A most color-filled 'landscape' that's what! Finding a refrigerated trailer with deep scratches was the easy part as was finding colorful garbage. The hardest part about a shot like this is the coordination needed to balance the garbage in one's hand, while tripping the camera's shutter with the other. The solution, more often then not is to use the camera's self-timer; a 10 second delay in this case. 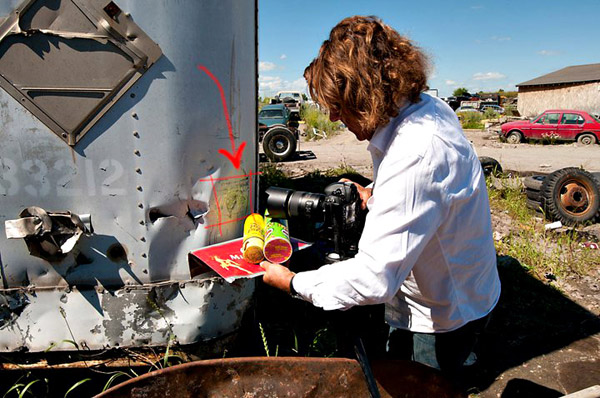 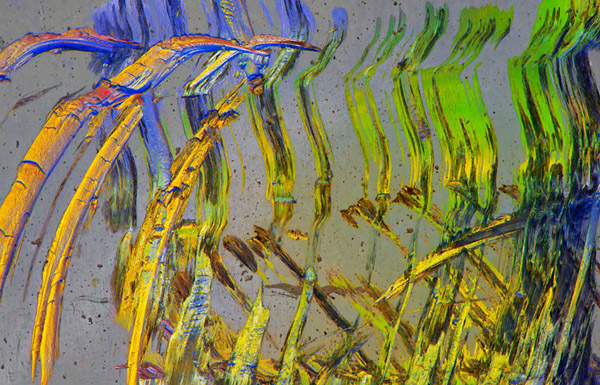 My 'best' image of trash, which a few days later created quite a stir, was made on the same morning I took the image you see here of a windmill and dike. As one might expect, all of my students in the workshop took this 'same' shot of the windmill of dike and nor surprising, each student was quite happy, if not elated, with their results. 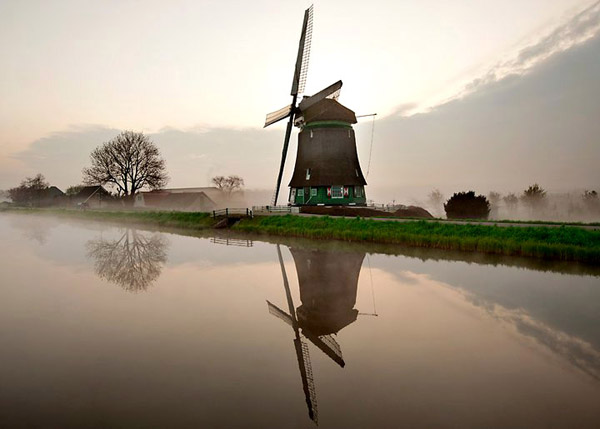 As we stood their on the edge of this dike shooting this scene with our wide-angle lenses, I felt a small 'lump' under my right foot and in raising my foot, I noticed a smashed and very rusted BEST beer can. I ventured that someone, driving by on the nearby road, had tossed the can out the car window and someone else, perhaps on foot or on a bike, came along and smashed it with their foot. As I bent down and picked it up, allowing me a closer inspection, I sensed a growing excitement, an excitement that is normally associated with watching my son and two daughters be born. Hard to believe I am sure, but true!

I proceeded to photograph the BEST beer can over the course of the next few minutes and once finished I was of course quick to offer the BEST beer to all of my students, but everyone of them refused, politely I might add, choosing to relish the compelling windmill shots they had all recorded in what was truly a peaceful morning. It was not until the next afternoon, when we sat down for our first of two 'critiques', that they all saw my BEST beer image on the computer screen. Every one of them lamented, "Oh my God, how I wish I would have shot that image after-all!" 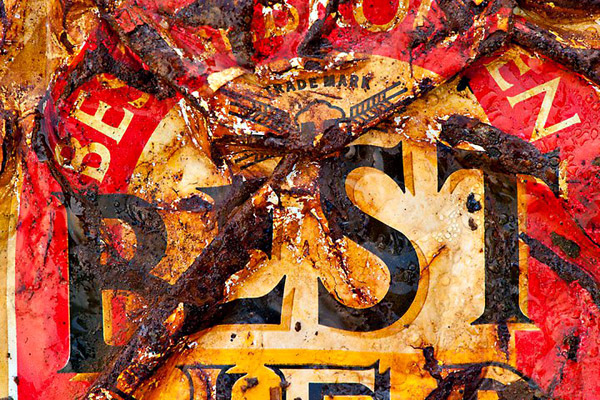 Why do I find the image so compelling? In part, it is due to the contradiction. It might say BEST, but that is one of the worst BEST's I have ever seen and the arrangement of what is clearly a chaotic BEST, makes for the PERFECT BEST of all; like I said, I love the contradiction!