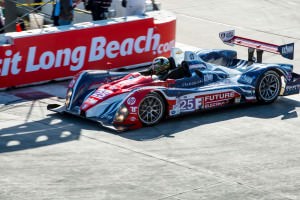 As if Southern California needed another reason to party, the 38th Annual Toyota Grand Prix of Long Beach rolled into this seaside city for its weekend extravaganza, April 13–15, 2012. This stop on the IZOD IndyCar Series, as it is every year, is a visual feast for racing fans; a colorful, exciting palette for amateur and professional digital photographers; and a world-class social event for trendy, chic and hip celebrities, their fans and wannabes.

The weekend had an inauspicious beginning on Friday, April 13, when frequent rain marred some opening day activities. Although drivers were able to practice during the morning’s one-hour session, there were still wet patches on the track that caused reduced speeds. The rain returned, however, during the afternoon, canceling the second practice session entirely.

Because there were fewer cars on the track, the rainy first day of the Toyota Grand Prix of Long Beach may have been actually beneficial for the amateur digital photographer. With a Super Photo Pass, they have access to four specific shooting locations and the Pit Lane Area at scheduled times. The weather likely limited the number of photographers, making it easier to capture great shots of the practice runs that did occur. Plus, an overcast day creates more even light, reducing reflections and flares.

With less qualifying racing, the amateur photographer with an IZOD IndyCar Paddock Pass had more time to take pictures in the pit and garage areas. Drivers and their teams are involved in various preparatory activities: cars in the shop, cars being pushed to the start lane, cars entering the pits after a run, etc. It’s likely the weather conditions resulted in drivers, mechanics, owners, race officials, families, the media and celebrities congregating in the pit area. They provide excellent subject matter for the non-racing photos that are needed to tell a complete story of the weekend.

Equipment tip: During your pit photography session, it may be better to shoot with a compact camera than a bulky DSLR and lens. You’ll be less of a distraction and can move closer to your subject(s), which is a primary rule of good digital photography.

If you’re new to motorsports photography or an IndyCar Series event, then it’s important to purchase a Super Photo and/or IZOD IndyCar Paddock Pass in advance. Even more critical is to make sure you understand the rules and limitations of each pass. Security won’t regard ignorance as a defense as they escort you off the grounds. You’ll enjoy the race, your digital photography experience and the exciting atmosphere of the event if you conduct yourself as much like a pro photographer as possible. 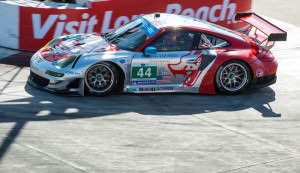 For example, the Toyota Grand Prix of Long Beach Super Photo Pass only allows you to shoot from one of the designated locations for a maximum of 30 minutes. Be assured that there are official race personnel watching you. That’s why is so important to study and thoroughly understand the racetrack and the views from the Super Photo Pass shooting locations, and then come to the track with a plan in mind for each position. Compile a mental list of photos that you can capture during 25 minutes or less. With a solid strategy, you won’t find yourself being removed from the location, your fellow photographers will have a fair shot at obtaining their images and you’re more likely to end the day with the photos you wanted.

Safety is another critical element of using a Super Photo Pass at the Grand Prix of Long Beach or any other IndyCar event. For example, you won’t be admitted to the pit area at Long Beach if you are wearing shorts or open-toed shoes. Plus, you must sign a waiver release at the Pit gate to enter. There is also a long list of prohibited items that may affect your photography plans, such as a ladder or step stool, stadium seat or folding chair, or a large umbrella. Because almost all digital cameras have video capabilities, make sure you also understand any recording restrictions. For example, at Long Beach, you are permitted to shoot video for non-commercial use only in unrestricted areas, but there are other areas where it is prohibited.

For your general safety and comfort, wear a pair of walking or similarly substantial shoes. It’s a good idea to wear or bring a wide-brimmed hat and to apply sunscreen.

Follow the tips in this and other Toyota Grand Prix of Long Beach 2012 articles for a great time and great digital photos.