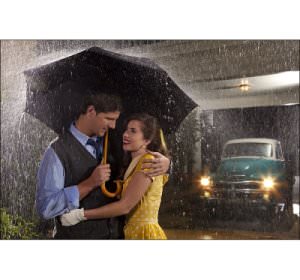 In this lesson, commercial photographer Jay P. Morgan shows how to combine special effects with good basic lighting to achieve an exciting rain scene portrait. This special effect of producing rain on demand can be created with items you probably already have in your garage, but if you don't have them they're not that expensive to buy.

Jay P. has been shooting commercially in Los Angeles for more than 20 years. His client list includes Paramount and McDonald's along with many more. His signature style is to create imaginative, highly staged "vignettes" that typically flout every convention, from gravity to propriety. He has won national and international recognition and his work has been published in numerous articles in advertising, graphic arts and photographic journals.

The first thing we did on this shoot was to build a rain rig. Rain is one of the easier special effects to create in small areas, but can be very hard to cover larger areas. The secret is that you don't have to cover the entire area. You simply need a curtain of water from side to side across the frame. 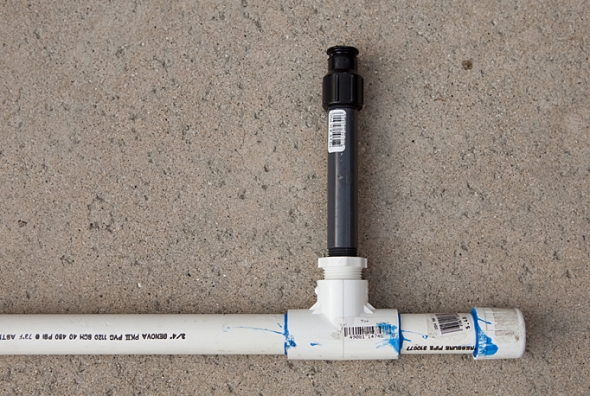 This Rig is simply made with standard sprinkler parts from a hardware store: 3/4-inch PVC T joints with screw-in adapters connected to 1/2-inch threaded pipe and a sprinkler head. I use a sprinkler head that covers a half circle rather than a full circle and position it so the flat side is towards the camera. As you might imagine, this keeps the water form hitting the camera. The closer this curtain of water is to the camera, the shorter it needs to be. However, if it's too close to the camera, the rain looks fake. Here, I set the rig just past the trees, about 15 feet away from the camera.

The sprinkler heads are in a straight line and create a curtain of water for the camera to look through. This makes it so we do not have to put rain on the background. When you shoot through the water it looks to the camera as if it's raining deep into the shot. You do, however, need to wet the background or it will give the illusion away. The sprinkler heads must be pointed up so the water comes falling down. If you don't point the heads up, the rain will have a spray pattern from each sprinkler head and the result will look contrived. [Figures 2 & 3] 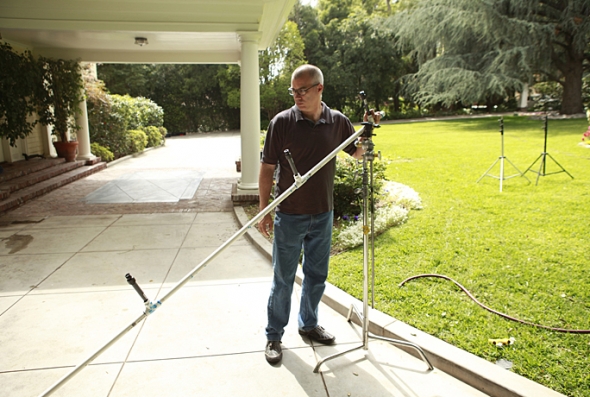 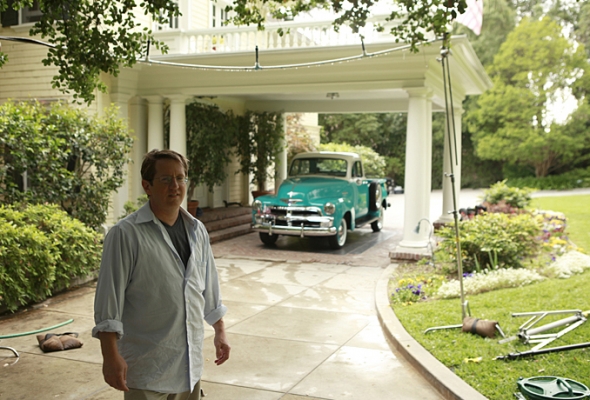 Here, you can see how we attached the rig to a garden hose with a 3/4-inch adapter. [Figure 4]

Next, we turned on the water to see how the "rain" would look. Sprinkler heads make a fine misty type of rain and can work in some cases. In the test shot below, we see the mist with a few harder drops. These hard drops were created by the water hitting the trees and dripping off and didn't come directly from our sprinkler heads. [Figure 5] 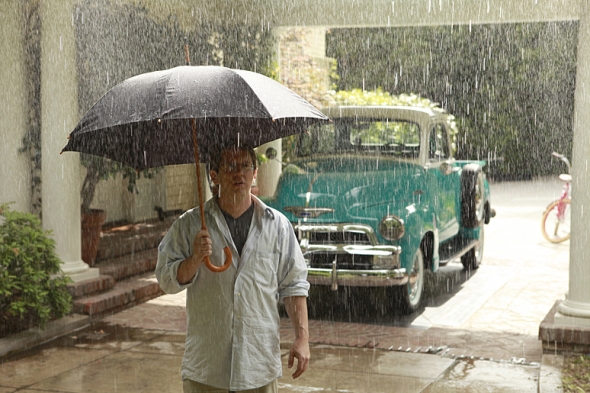 In reviewing the shot, I felt that we needed a harder rain look, so we went with the next option: gorilla rain. This is the easiest way to make rain, but it must be fine-tuned to gain coverage.

Using a simple fan sprayer and a garden hose you can create heavy rain. It's simple and quick, but again, you need to point the spray up and let it fall down so that you don't see the water source. [Figures 6 & 7]

We placed one fan sprayer on each side of the camera frame and worked on different angles of spray until it blended together. It took awhile, but we were able to make it work. It can be a time-consuming challenge to avoid the look of two fans of water meeting in the middle. Essentially, you need to point them higher or more sideways until you get the right mix.

In hindsight for this shot, I could have placed them on the roof of the house and mixing them would have been much easier. [Figures 8 & 9]

In reviewing our next test shot, we saw that this method created larger raindrops. This type of "rain" is easier to photograph because the water drops are larger and more visible. With the rain now dialed in how we wanted it, we were ready to place our lights. [Figure 10]

Here is our setup with ambient or natural light only. It's hard to see our couple or the rain since neither are lit. [Figure 11]

The first light we set up was a Medium LiteDome soft box. We set it to the right side of the camera as a side light. Had we positioned it too frontal, it would have looked like a portrait light, over-lit and fake. As a side light, it could provide definition to our couple and look natural. [figures 12 & 13]

Figure 13
Here's the result with the side light and ambient light only. As you'll see, the lighting would become more natural once we added a bounce fill to open up the exposure on the couple. [Figure 14]

Here, you can see the relationship between the soft box, the water and the couple. I used the Medium LiteDome soft box because I wanted to contain the light and keep it on the couple. A medium sized box is also more directional and provides a harder highlight than a larger box does. [Figure 15]

Next, I added a beauty dish with a grid shooting through a Photoflex LitePanel with translucent fabric attached. The beauty dish needed to be softened to look like a soft fill, so adding the LitePanel broadens the source and softens the beauty dish. This is an "open fill" or "bounce fill" that opens up the exposure our couple and does not feel directional. [Figure 16]

In this next test shot, I could see that the couple looked natural in the setting, but that they needed to be tied into the rest of the shot. The rain needed a light source to become more visible. Making it more visible would also help the light on our couple seem more natural. [Figure 17]

Next, we set up a strobe head with a reflector to the Camera Left side of the shot behind the rain and pointed it toward the camera, back-lighting the water. Water needs to be back-lit in order to become visible to the camera. It's important, however, not to create lens flare, so you should flag the light off the lens if necessary. [Figure 18]

Here is our shot with the first rain light. At this point, things were starting to take shape and look good. This is typically the point in the process where I start to feel like it's going to come together and the stress begins to let up just a little. The challenge here, though, was that it was getting dark, which meant that our ambient light would be diminishing very rapidly. The need to hurry was great at this point if we wanted any ambient fill. [Figure 19]

To balance things out, we set up another rain light and placed it on the Camera Right side of the frame behind the rain. We started with the light on the far right side, but it was not lighting the rain enough in the center.

The light was dropping fast, so I had my assistant place it in the shot against the white post. The post provided a solid white area that would be easy to clone out later in Photoshop. Had we placed it against the car, it would have been all but impossible to retouch out. [Figures 20 & 21]

Here's how the next test shot looked with both rain lights on. The lights gave me a good visual of the rain and the coverage was good from side to side. Again, you can see the stand against the white post on the Camera Right side of the frame, which we would retouch out later. At this point, we were considering adding some bushes to cover the base of the stand. Also, the pickup truck in the driveway was a little too dark and needed to be lit. [Figure 22]

This light helped us to see the truck, which was essential for the 50's theme we were going for. At this point, the shot was lit except for one thing: we needed to turn on the headlights of the truck. With the headlights on, it would appear to the viewer that they were the source of the light on our couple.

In an outside setting like this, the lighting needs to appear natural to the viewer. The viewer expects there to be a streetlight, sun, or artificial light creating the lighting in the scene. If you're aware of that expectation, you can set your lights to make the scene appear naturally lit. [Figure 25]

This was our finished shot with the completed lighting and retouching. I did, however, want to push the shot a step further by bringing the talent out from under the trees and into the rain. [Figure 26]

Here's the shot after coming in a little tighter and getting the talent a little wet. [Figure 27]

It can be a lot of fun working with special effects and seeing how we can apply them to the shots we are doing. Special effects help us to create unique images. Keep in mind that you don't have to shoot a large 1950's setup to use rain. I have seen small head-and-shoulder shots of a person with rain falling that look great. These effects can be used from large to small, it's all up to you.

I hope the techniques illustrated in this lesson will help break down the barriers a bit for you and give you the confidence to apply rain to your own ideas.