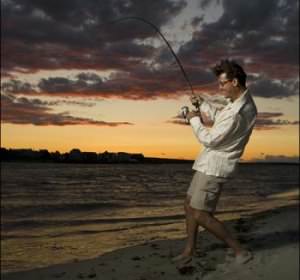 Photographers all know that the most magical time of day to shoot anything outdoors is either dawn or dusk. The sun sits low in the sky, which makes for warm tones, lower contrast and colorful skies and backgrounds.

When it comes to outdoor portraiture, however, sometimes sunlight or dusk light is not enough. Sometimes, you need a little supplementary light to help enhance or create the look you're going for.

This lesson features some new portable Photoflex equipment, including the StarFire shoe mount flash, the FlashFire wireless triggers and the LiteReach LiteStand, and demonstrates some simple-yet-powerful methods in achieving stunning outdoor portraits.

For this dusk portrait lesson, I wanted to try out the new Photoflex Wedding/Assistant Powered XS LiteDome Kit, which consists of the following equipment:

In addition to this gear, I decided to bring along a Medium LiteDome and supporting hardware (StarFire shoe mount flash, FlashFire wireless receiver, Basic Connector, Adjustable Shoe Mount Hardware, Shoe Mount MultiClamp) in case I wanted to use a second light.

Everything, including the additional gear, fit nicely into the Gig bag with room to spare. Here is the equipment laid out on my studio office floor, sans Gig Bag. [figure 1]

The Concept and Setup

The basic idea for this lesson was to demonstrate how straightforward it can be to light and photograph an action portrait at dusk for spectacular results. After mulling it over a bit, I decided to use a surfcasting fisherman at a local west-facing beach.

The three of us, Paul (surfcaster), Aaron (assistant) and I, met at the beach about an hour and a half before sunset so that we could plan out and document our shoot. After deciding on the general shooting area, I asked Aaron to take some shots of me setting up the lighting gear.

I wanted to keep the gear out of the sand for the most part, and thus kept it either in the Gig Bag or attached to a stand. First, I set up the Small LiteStand and attached a ShoeMount MultiClamp to it. [figures 2 & 3]

Next, I mounted the StarFire shoe mount flash to a FlashFire wireless receiver. As you can see, the FlashFire has a hot shoe mount to accommodate the flash. [figures 4 & 5]

The next step was to be able to mount the flash to the LiteStand and for that I needed the Adjustable ShoeMount Hardware, which also has fittings to support a small soft box. Note that there's a cold shoe that can be positioned laterally along the horizontal plate for custom placement. This cold shoe is where you mount your shoe mount flash, or in this case, your shoe mount flash + wireless receiver. Note that this hardware comes with two easily removable cold shoes in case your wireless receiver does not have a hot shoe mount like the FlashFire. [figure 6]

Here, you can see the StarFire flash and FlashFire receiver mounted to the cold shoe of the Adjustable ShoeMount Hardware. [figure 7]

Next, I simply mounted the Adjustable Shoe Mount Hardware to the Shoe Mount MultiClamp. [figures 8 & 9]

Once the Extra Small LiteDome was set up, I mounted the bottom side of the Connector to the ShoeMount Adjustable Hardware and adjusted the Hardware so that the Flash was optimally positioned to project light through the Connector and into the LiteDome. [figure 11]

I then Velcroed the back flap to the back of the Extra Small LiteDome to prevent any potential light spill from the flash. [figure 12]

To sync up the camera with the flash, I mounted the wireless FlashFire transmitter to the hot shoe of the camera and tested the connection repeatedly, which worked every time. [figures 14 & 15]

Note: I've used a variety of wireless triggers over the years and am thrilled to find that the StarFire/FlashFire setup is more consistent with respect to radio transmission than any other setup I've used. For this lesson, and two other lessons I recently shot, transmissions were successful every time.

I knew that once we started shooting, I'd have a brief window of time to capture the shots I wanted, so I decided to set up the Medium LiteDome as well, attach it to another StarFire flash and FlashFire receiver and have it close by when it was needed.

With the sun getting closer to the horizon, we were just about ready to shoot. While Aaron and I had been setting up the gear, Paul was actually surfcasting with the fishing gear he had brought. Several times, we had seen some very large fish jumping out of the water and Paul thought he had a good chance of landing one. Unfortunately, though, his line got caught on some nearby rocks. As he tried to free the line, it occurred to me that this was an ideal mishap photographically, as Paul could make it look as though he was battling a large fish. So we decided to leave the line caught until after the shoot.

As Paul mock-fished, I got the camera and started to frame up the shot. Initially, I wanted to go for a backlit angle and so I took a shot without any lighting gear involved to get a sense of the ambient light. In reviewing the result, I felt like the sun was still a little too high and decided to go with a different angle. [figure 16]

I came around the to the other side so that the sun was split-lighting Paul and took another test shot. In reviewing the result, I found I liked the warm light hitting Paul and decided to build on this perspective. [figure 17]

The wind was pretty strong here with no signs of abating, and I realized that positioning the Extra Small LiteDome setup up high on the LiteStand wouldn't work under these conditions, even with sandbags weighting the base of the LiteStand. So I asked Aaron to substitute the LiteStand with just the riser from the LiteReach LiteStand and hold it overhead to serve as a hair/rim light. Once Aaron was where I wanted him to be, I once again tested out the transmission from the camera to the StarFire flash, which worked great. [figure 18]

With everything ready to go, I got back about 50 feet or so with my telephoto lens and framed up the shot to include the arc of the rod. I asked Paul, who is also a part-time actor, to give me his best fishing performance while I took a few shots. Here is one from that series. [figure 19]

I then decided to come in a little tighter to focus more on Paul and less on the fishing rod. With everything ready to go, I took a few more shots. Here's a favorite from that series. [figures 20 & 21]

As you can see from the side-by-side comparison below, the added light really helps to articulate Paul's silhouette against the background and makes for a much more dynamic shot. [figure 22]

After the Sun Goes Down

We had time for one more shot, as the sun was now dipping below the horizon. I asked Paul to change his shirt, as I wanted fabric that would flow a little more freely in the wind. I also had him reposition to face more south than west so that the camera would be facing directly west and capture the clouds that were still lit up by the sun.

While Aaron was making the switch, I found the exposure level I wanted for the background. [figure 23]

Aaron was now back in position and ready to position the light. After testing out the power levels on the flash, we settled at about 3/4 power. I then had Aaron stand in the surf so that the light from the Medium LiteDome would gently rake across Paul. [figure 24]

With everyone in position, I asked Paul once again to give me his best fishing performance while I took a final series of shots. We came away with a lot of great shots, but this one ended up being a clear favorite. A great balance of ambient and strobe lighting [figure 25]

Below, you can see just how much the Medium LiteDome setup provided. [figure 26]

As always, remember to experiment with your lighting and have fun in the process!

Written and photographed by Ben Clay, contributing lesson writer for WebPhotoSchool.com® and Photoflex.com®.

Real estate marketing depends on quality real estate photos. This has been true for decades, but is especially true in the era of COVID-19.