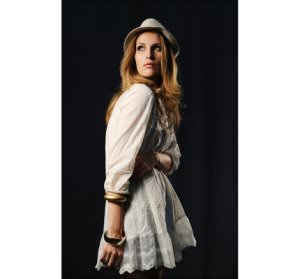 There's a lot of great things to be said about Photoflex, a company that has now been in business for over 25 years. It's comprised of people who are both experienced and passionate about photography, it's committed to making top quality/affordable equipment, and it's dedicated to providing first rate photographic education to its end-users. Whether it's through online lessons, social media, workshops, trade shows, or simply phone lines, the Photoflex team is always present to assist others in their photographic endeavors.

This lesson is unique in that it draws from lighting demo content shot at two separate Photokina trade shows. Though it demonstrates basic fashion and portrait techniques using a modest, entry-level lighting kit, it also reveals how the process of creating pictures is more than the sum of its parts. Much like Photoflex.

The Photokina show in Cologne, Germany. It's the biggest photographic trade show in the world -- so big, in fact, that it can only be held every two years. It's a 6-day event that attracts the best the industry has to offer, as well as about 180,000 attendees. Photoflex has been exhibiting at Photokina since 1992 (2012 marks Photoflex's 11th consecutive show), and it's always a wonderful time for us to meet with a broad range of end-users, as well as to demonstrate our line of products.

Cologne is also home to the breathtaking Cologne Cathedral (or the "Dom" as locals refer to it), which is the largest Gothic church in Northern Europe. Completed in 1880, it took 632 years to construct. Below is a shot of the main entrance. As you tour this awe-inspiring city, you begin to understand why it's host to the world's largest photographic trade show. [Figures 1 and 2]

The first Photokina was held in Cologne, Germany in 1950 and it's now held biannually in September at the Koelnmesse Trade Fair and Exhibition Centre. Here's a shot of one of the entrances. A little more modern than that of the Cathedral! [Figure 3]

The Photoflex booth, both here and at other trade shows, has evolved substantially over the years. In addition to having the majority of our products on display, we also dedicate space for meetings, as well as for live shooting demos. In this snapshot of our booth from 2010, you can see the shooting space in front of one of the backdrops we used for our model shoots. [Figure 4]

Mounted on a truss system, the majority of our soft boxes are typically on display. Photoflex offers many different types and sizes of soft boxes and other lighting modifiers, and each serves a unique purpose. The rule of thumb when deciding on a light modifier is essentially: the larger the modifier, the softer the quality of light.

Many people just starting out with lighting are often interested in simple, easy-to-use solutions, and while none of our gear is complicated, we do offer a very straightforward, economical lighting kit: The FirstStudio Portrait Kit. This kit consists of the following gear:

This kit takes almost no time to set up and each light head has a switched cord that plugs directly into a household outlet. For powered lighting, it doesn't get any simpler than this. [Figure 6]

Demos in the Booth

During the show in 2010, I was able to demonstrate many different lighting tools, including the FirstStudio Portrait Kit. On the first day, I had both of our models stand in for a portrait. I had them stand about 8 feet in front of a black muslin backdrop and then I positioned the two lights around them.

I positioned one Umbrella setup off to the left as the main light and positioned the other opposite this light to serve as a rim light. It's a simple lighting strategy, but one that can work very well to create a dynamic look. You cannot adjust the power output with these lights (they're either on or off), which is actually a good thing, as it keeps things simple. The positioning of the lights is how you can control the lighting ratios; the further away the light, the more its intensity will drop off. Working with these lights is very intuitive, as they are continuous, and what you see is what you get. [Figures 7 & 8]

I was shooting with a Nikon D3X and had dialed in the following settings:

After a few test shots, I was happy with the lighting and positioning. I wasn't wild about the clashing colors of the dresses, so I ended up converting the results to grayscale in post afterward. Here's one from that series. [Figure 9]

The conversion to black and white works well here, as it accentuates the gradating tones and overall quality of light from the FirstStudio lights. It isn't overly soft light (note the defined shadows cast from the noses and jawline), but it also isn't so high in contrast that it overexposes the highlights. It's the type of "punchy" light you see in a lot of fashion photography.

Another interesting feature of the FirstStudio light is the type of catchlight it produces. Because the umbrella is lined with highly reflective silver fabric, it projects a defined, octagonal star-shaped reflection in the eyes, as you can see in this closeup crop. [Figure 10]

Due to the limited shooting space in the booth, I kept the general placement of the lights where they were. Each day, however, we'd have the models wear different outfits to capture a variety of looks. I shot with German model Julija Stoffersen most of the show, who is also a talented hair and makeup person (she did her own makeup for this show). Julija brought a variety of outfits, and on the second day I had her wear a light-toned top to contrast against a black muslin BackDrop, suspended by the ProDuty Support Kit. [Figures 11 & 12]

Once again, I just used one FirstStudio light as a main, and one as a rim, and my camera was kept to the same settings as before. After some minor positioning with the lights, I fired off a series of shots of Julija, who struck some beautiful poses. Here are two of my favorites. [Figures 13 & 14]

As you can see, this simple lighting setup worked beautifully to render Julija in an elegant, dynamic way. In fact, many attendees at the show were amazed that these entry-level lights were creating such a high end look. I explained that this was a fairly simple setup, and one that is somewhat limited with what you can do (adjusting lighting levels, shooting in mixed lighting situations, etc.), but for many types of indoor portrait and fashion shooting, these lights work beautifully.

On the last day, Julijah wore a more elegant red dress, which tied in nicely with her ethereal poses. And because I was shooting with continuous light and not with strobes, that meant that anyone with a camera could photograph Julija in action as well. Some even got great shots with their camera phones!

For the DSLR user, though, I printed up the camera settings I was using, taped it onto the monitor I was using to project the images, and urged attendees to take part in the shooting. People got very excited with the process, and it became extremely crowded at times. [Figures 15 & 16]

Here's one from this series that captures Julija nicely. When shooting models, I tend shoot from a lower perspective so that they are rendered as statuesque, or somewhat larger than life. This perspective doesn't work for everyone, as it can be somewhat unflattering for those who have more than one chin for example, but it often works well with angular models with defined features. [Figure 17]

During the 2008 photokina show two years earlier, I also did some demos with the First Studio Portrait Kit, but focused more on closeup portraiture rather than 3/4 fashion.

In this series, I used one FirstStudio light as a top light and then used a 32" LiteDisc as a bounce fill. This is also known as "clamshell lighting" due to the shape the lights make. This lighting approach is very common for female portraits and closeup fashion, as it minimizes shadows and creates bright catchlights in the eyes. I also used the second FirstStudio light as a subtle side/rim light off to the left. [Figures 18 & 19]

Again, since I didn't need to shoot with a trigger for the lights, which were continuous, I invited attendees to shoot with their cameras as well. These are the camera settings I used and recommended to others:

In this first example, I shot with the White side of the LiteDisc reflecting into the model's eyes, which made for smooth reflections in the lower parts of her eyes. [Figure 20]

After reviewing the results, I liked the sparkled reflections that the FirstStudio lights were providing and wanted to match those underneath. So I flipped the LiteDisc to reflect its Silver side and took another series of shots. Here's one that reveals the textured reflections in both the FirstStudio light/Silver Umbrella and the Silver side of the LiteDisc. [Figure 21]

Photographed and written by Ben Clay, Lead Photographer and Contributing Instructor for PhotoflexLightingSchool.com