Beauty Shot in a German Studio

In portrait and fashion photography, it's important to direct the light.  And for beauty shots, it's often important to create symmetrical lighting.  For this shoot, German photographer Benedikt Frings-Ness set out to place strong emphasis on creating soft light, while also providing a high degree of contrast. 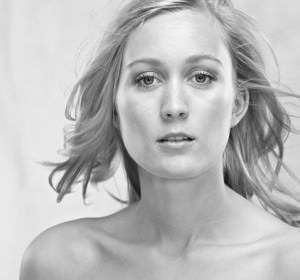 [Note: The video below is in German, but Benedikt's visual demonstrations are pretty understandable.  For more details in English, read the lesson copy below.]

Photoflex offers different types of lighting modifiers that will produce the type of lighting you're after.  From hard to soft and everything in between.  Here, I had the model stand in from of a silk background to create an ethereal, glamorous look.  I also decided to use a wind machine to bring the hair of the model to life, as it tends to be more photogenic than flat, static hair.

Building the Lights from the Back Forward
For this beauty shot, I used a total of six lights and a reflector.  Two were used as backlights with standard 7" reflectors attached.  On each head was a red/orange gel and a grid to keep the light from spreading into the camera lens.  [Figure 1]

These lights were positioned to light up the semi-transparent silk background, which created a shimmering, textured effect.  The background color, similar to the skin tone of the model, lent a soft, feminine touch in the overall image.

For the edge/rim lights on the model, I used two medium Photoflex HalfDome soft boxes (also known as "strip lights"), each with fabric Grids attached to the faces.  The main light was a Large MultiDome soft box positioned high and facing down, and I also decided to add one more head with a beauty dish attached, which was positioned next to the camera. [Figure 2]

Finally, a 39x72" LitePanel with White fabric would be used to bounce light from the MultiDome into the shadows of the model's face.  [Figure 3]

The Main Light
I used the MultiDome as my main light, positioned it high and angled down toward the model.  Both the front face and interior baffle helped to create a soft quality of light.  Without these layers of diffusion, the projected light would be too hard and specular to be flattering.  The MultiDome has also interior panels that are gold on one side and silver on the other.  Here, I used two silver and two gold, which added to the warm atmosphere I was going for.  [Figure 04]

The Test Shots
My first test shot was with the background lights and main MultiDome only.  As you can see, there's a nice warm tone to the background, the model's general outline is lit nicely, and the main light has created the classic butterfly lighting.  (If you squint and look at the shadow under the nose, you can make out the shape of a butterfly, more or less.)  While the MultiDome created a nice main light for the model, you can also detect a subtle gradient falloff in the face from top to bottom.  [Figure 5]

Without further modification, the light alone renders the model with fairly deep shadows, which is oftentimes unflattering, especially around the eyes and neck.  I could have placed a second soft box underneath and pointed it upward to fill in the shadows, but that can result in "Halloween lighting" which can also be unflattering.

Instead, I decided to simply bounce light projected from the MultiDome back into the shadows with a LitePanel with White fabric attached.  This approach always results in balanced, soft and uniform illumination.  A silver reflector would have reflected too much light here, and would have boosted the contrast more than I would have wanted.
With the LitePanel added, the shadows were now much lighter and the overall lighting is a lot softer. [Figure 6]

Next, I powered up the HalfDome soft boxes and positioned them so that they would further separate the model from the background and minimize the color of the background through the edges of the hair.  I made sure to attach the fabric Grids to each of the HalfDomes to keep this light directional and out of the camera lens and off the background.  Finally, I added a beauty dish a little lower than the main light and at lower power just to add some reflections in the eyes.  Without reflections, the eyes can appear lifeless; not good for a beauty portrait! [Figure 7]

Final Shots
With the lighting finally dialed in, I was ready to shoot and have the model interact with the camera.  For a final touch, I used a high-powered fan to add movement to the hair and make the overall picture feel more alive.  Here's one of my favorites from the shoot.  [Figure 8]

As you can see, a post-production black and white version works very well with this lighting setup as well.  Once you've got the lighting right on set, you'll have many more options available to you in post. [Figure 9]