Conquering a Mountain of an Assignment 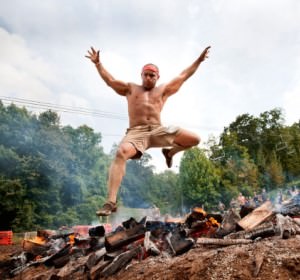 Recently, commercial photographer Ian Spanier was commissioned to shoot a group of competitors at a grueling Spartan Race. Though the obstacles of such an event are formidable, Ian had his own challenges in maintaining his production standards for this shoot.

"This is the kind of assignment I certainly could have shot without bringing any lighting gear," Ian explains, "but I like to give my clients something a little more dynamic. After all, anyone can just take a camera, point and shoot these days."

The path of least resistance is fortunately not one Ian Spanier chooses to travel, and it's consistently reflected in his work. In this lesson, Spanier recounts the logistical challenges, testing and ultimate solutions for this unique photo adventure.

The Spartan Race
This past Fall, I got a call from Gaspari Nutrition to cover their sponsored amateur and professional athletes at a Spartan Race, an event like no other. Hundreds of men and women literally run up a hill to start a race along boulder-strewn terrain through various obstacles: cargo nets, unevenly spaced monkey bars, slides into mud pits, soap-covered walls, hand-over-hand lines suspended over water, fire pits, crawls under barbed-wire, and more.

Team Braveheart is an amazing group of people, many of whom have overcome incredible physical challenges - from brain tumors to massive digestive issues. Team leader Jen Rosant, an inspiration to everyone on the team, vowed to not only finish strong herself, but to wait at the finish line to cheer each of the 77 astounding teammates through. At the start of the race, everyone within earshot easily understood how proud, strong, and more importantly, present, they all were.

The Equipment
In determining the lighting gear, I knew it had to be portable and to have enough output to overpower the sun. My first thought was to do what I once did for a Dallas Cowboys Cheerleaders Training shoot, where my assistant carried around a Profoto 7B. But a 7B on your back is no picnic, and here, we would not be on flat terrain.

On some of my group shots for MTV, I take two beauty dishes and arrange them side-by-side so as to create a stronger key light with better spread, yet still contained (I owe this one to one of my great assistants). I figured that I could rig a similar setup with a pair of Photoflex TritonFlash heads. A TritonFlash and battery is much lighter than a Profoto 7B and the battery life of the TritonFlash flat out make the decision a no-brainer. Since it would just be my assistant and me (and really just him holding the lights), I needed to create a mobile mount that had some reach and wasn’t painfully heavy.

I then attached a clamp on each side of the middle section, and onto each mounted a TritonFlash head. The sliding attaching bar on the Boom was great on the opposite end of the boom, creating a handle much like a rifle grip. This would provide a great counter-point for my assistant.

A few days before the race, I decided to test everything at 1pm, figuring that would be the worst (brightest, highest in contrast) light of day. I used my Pocket Wizard TT1 and TT5 units to bypass normal sync speeds. I expected I would need the light to be about 6-9 feet from my subjects.

Initially, I didn’t plan to attach the Extra Small OctoDomes to the TritonFlashes, figuring I’d probably need every bit of power to combat the sun. So instead, I just attached the hard reflectors, and considered using CTO gels to warm up the lights a little.

Reading the ambient at f/8 at 1/800th of a second at ISO 100, I positioned the “T-bar” on a LiteStand and did a timed test shot of me with my hand in front of my body. The exposure was good, but the hard reflectors cast a shadow that looked a little too harsh.

So I swapped out the hard reflectors with the OctoDomes that come with the TritonFlash kits. Now I’d have a strong, but softer light. A fast recycle time was key for this shoot, so I experimented with distances and with one or two layers of diffusion in the OctoDomes. Part of what I love about Photoflex soft boxes is that you can configure them so many different ways. For this setup, I figured I would succeed with just one layer of diffusion.

After some experimentation, I found my sweet spot. With just the interior baffles attached (no front faces) and with the light approximately 7 feet away, I landed on the following exposure settings:

I wanted to ensure the flash duration would not be an issue and that I would be able to successfully freeze action. So like a fool, I set up another timed shot and attempted to capture myself jumping in midair. I must have looked like a clown jumping up and down in my front yard, but I got the shot I needed. Here I am making the leap of faith.

I wore a hat on purpose to see if the TritonFlash setup would fill in the hard shadow cast from the sun, and as you can see, it did very well. I knew that during the actual shoot, I would always try to position myself with the sun above and behind my subjects in order to create nice highlights on them.

With the rig itself ready to go, I then focused on the mobility factor. I ran the cords from the TritonFlashes to my Lowepro Scope Porter 200™ AW  backpack, which has two side pockets that are perfectly sized for the TritonFlash batteries. This pack would make my assistant’s job a lot easier. As for me, I planned on strapping on a Lowepro 202AW SlingShot, which would contain my backup camera, memory cards and batteries. I also stuffed a bunch of garbage bags in the pack in case of rain. Trust me: you don’t want your gear to be without protection from the elements.

On To Battle
We arrived at the mountain a little early so that I could get a lay of the race route, as well as to demonstrate the lighting rig to my assistant.

Shortly after that, we met Team Braveheart and the shooting began.

This day was not quite as bright and sunny as my test day due to scattered clouds, which meant that I’d have to keep an eye on the sky to maintain good exposures.

Immediately, we saw that the output of the double barrel TritonFlashes we had in our hands was a winner. When the sun was out, we had great results. The ideal, not surprisingly, was when our subjects were in open shade. But even in direct sun, the TritonFlashes helped to fill in any detracting shadows.

The TritonFlashes really did a great job with all of the group shots as well. Without them, I don't think the shots would have been so dynamic.

End of the Day
After shooting all day, and only burdened with walking down the mountain, we were both exhausted. I do consider myself to be in pretty good shape, but I was beat. I find it hard to imagine what the competitors must have felt!

My makeshift lighting rig worked out great and provided me with images my client loved. The power output and quality of light were both fantastic.

Postscript
A few months after this shoot, Photoflex came out with the LiteReach Plus, a unique boom that would have been perfect for this shoot. I have since tested this new product on a shoot, trailing a UFC Fighter bow-hunting in the woods. The LiteReach Plus was a far better solution as an extention arm. Next time, the Boom stays in the studio, and the LiteReach is the go-to extender for me!

To learn more about the LiteReach Plus, check out this demonstration video by Canadian photographer Trevor Sherwin: