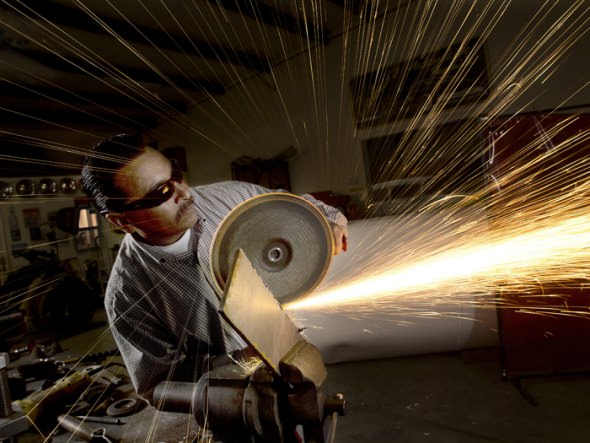 “Put on your safety goggles,” says Val, “there’s gonna be some glowing hot stuff flyin’ around in about ten seconds.”

Valerio Valera is an industrial metal artisan of the highest order. One minute he’s repairing a jagged crack in a bulldozer bucket with a skillful weld, and the next moment he’s fabricating a part for a 1957 Chrysler New Yorker. Val doesn’t work with plastic or wood, his love affair is with steel, and he’s been doing it for 25 years.

Steel is tough. It needs to be melted with a plasma torch, cut with a diamond blade saw or shaped with a grinder before it does the job Val has in mind for it. Before the task is completed there’s going to be flames, sparks, smoke, and lots of noise. All that makes for good photography, as you’ll see in this lesson.

Valerio's Welding and Fabrication is a well-known metalworking shop in San Juan Bautista, CA. Jeff Luhn, Jaron Schneider, and I set out to photograph Val, the owner, in his working environment with the tools of his trade. Val, the owner, is a good-natured guy with endless enthusiasm for his art. Projects range from farm machinery to hot rods. He's always busy and he loves what he does.

After arriving at the shop, Jeff and I set up near a classic 1955 Chevy that was being restored with the intent of using it as a background for the first shot. We knew we wanted to shoot all over the shop, and this was our first stop.

All the gear we used, we packed into a Lowepro® AW200 and a Photoflex® Transpac®dual kit case. Both cases easily held all cameras, lenses, lighting gear, modifiers, stands, and tripods needed for numerous lighting scenarios. [figure 2]

The lighting for the first setup came from four different controlled sources, but it wasn't nearly as complicated as it may sound.

The key light (or main light) would be supplied by a TritonFlash™ with a small LiteDome® as the light modifier. To give some separation, another TritonFlash™ inside of a small HalfDome® was placed behind and slightly right of Val. And to accent Val's surroundings, two StarFire digital flashes were placed inside the car: one in the engine and another on the dashboard. [figure 3]

Each of the TritonFlash™ heads were set to 1/8 power, while the StarFire™ units were each set to 3/4 power.

To help illustrate the lighting configuration, I've added arrows and tags below. [figure 4]

Note that the three visible planes of our subject's face are lit by their own light. This is one of the main techniques that photographers use to create a result with more drama and depth than a snapshot with ambient light or on-camera flash. Most of the photos in this lesson use this technique.

For figure 5, I set my camera to the following:

For figure 6, I chose a tighter focal length of 60mm, but otherwise did not alter my camera settings.

I was happy with the results, given how quickly we set up, but this initial shooting really just served as the icebreaker between Val and myself. While shooting, I was able to get to know Val a little better, which would help me in posing him in the coming setups.

Since I had scouted the location a few days prior to the shoot, I knew there was more to be had at the other end of the shop. After the first series of shots, we started prepping the second set, where I was excited to up the ante on this shoot.

At the other end of the shop, Jeff and I set up the small LiteDome® again as the key light to my direct right. We then placed the HalfDome® near the back of the shop to the right of the garage door to serve again as a separation light.

With all the space we had in this particular area, I thought it might be a good opportunity to do a two-person portrait. However, if I was going to add a second person, I would need another way to separate the models from the background. A rim-lighting technique was just what I needed to give me the nice highlights I needed on my second model.

For the third light, I took one of the StarFire flashes from the previous location and placed it inside an extra small LiteDome® and positioned it camera left, high above the car and both models.

To create another layer of depth, I placed a StarFire inside the dark engine compartment of the 1957 Chrysler. This approach to lighting the set in zones is my favorite way to approach an environmental portrait, and it's fun too.

I positioned myself near the back end of one of the cars and had Val lean against the hood of the car close to its front door with his chest facing away from me.

I had our second model, Ray, stand just behind Val and face me. Instructing both men to give me their best scowl, I got the following result. [figure 8]

As you can see from the result, both Ray and Val are exposed well and the HalfDome® and extra small LiteDome® work well to rim light both models. And their expressions helped contribute to the dramatic mood of the shot.

While I was shooting, Jeff came up with a really cool, albiet dangerous, idea: have Val light a cigar with his welding torch. Val was game and without missing a beat, he grabbed his welding torch and pulled out a fresh cigar. This was obviously not the first time he'd done it.

We moved the HalfDome® tight on Val's right, right up against the right side of the Chrysler and cut the output down to 1/64 power. We then moved the extra small LiteDome® forward and aimed it at Val's back to serve as a separation light. [figures 9 and 10]

I stepped back and let Jeff do his thing. He was using his Nikkor 18-55mm lens and had his Nikon set to:

With everything in place, Jeffery captured his final. [figure 12]

The torch was so bright that it ended up serving as the key light. You can see the evidence of the flashes on Val's right shoulder, his chest, and on the car. Without those strobes, Val's body would have disappeared into a black background, save for his floating head -- a much less appealing final image.

Keep in mind that Val is an experienced professional welder. Do not attempt a dangerous stunt like this without proper training, precautions, and safety gear.

For our final setup of the evening, we asked Val to take his grinder to a piece of scrap metal so we could capture some sparks in motion. Happy to oblige, Val grabbed everything he needed while Jeffery and I moved the lights into position.

When Val was ready, we gave him the thumbs up to start grinding. Everyone within range of the sparks wore protective eye gear, as the super-hot shards of sparking metal could do a lot of damage to the corneas.

I chose to shoot with my 12-60mm. I chose to drag the shutter (shoot at a slower shutter speed) to get as much ambient light as possible from the sparks.

I took a ton of shots from this setup, but two of them stood out as clear favorites. [figures 14 and 15]

As you can see, the sparks were captured beautifully and the additional lighting did a great job exposing Val, while not distracting from the spark show. As planned, we were able to create some great environmental portraits of Val without getting too complicated with the lighting.