How to Find Your Subject’s Point of View

This is one of my favorite ways to shoot an image. If done well, it pulls the viewer right into the frame and places them in the scene. The best way to show the subject's POV is to get right up to your subject and shoot either over their shoulders or right next to them. To accomplish this you're going to have to get rid of any fear or shyness about interfering or disturbing your subject. You might have to ask your subject for permission to get in close to shoot. I promise you — it will be well worth it once you do it. 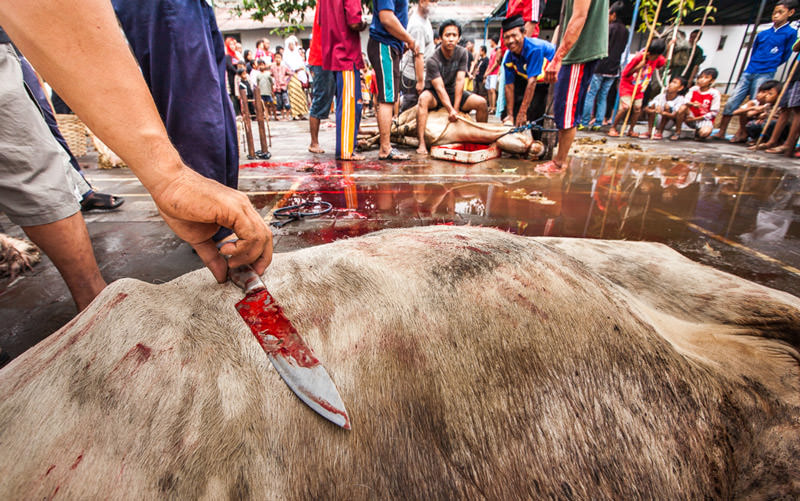 I was in Indonesia for Eid-ul Adha, the Muslim festival when they sacrifice a goat or a cow. I felt it was important to show how bloody it was and also that it was a community event. I tried shooting many different ways. Then I saw a bloody knife lying on a dead cow. I framed it and shot a few images. Nice. But when a man reached into the frame to grab the knife, I knew I had my shot. His hand and the position of the knife low in the frame all came together to give the POV of the person performing the sacrifice. While in Rajasthan, India, I ran across a large group of pilgrims as I was leaving Jaipur. I wanted to shoot this, but how? Here you see two photos of the same event, both from different POVs. The first image is good but a little predictable. It shows the POV from the secondary subjects — the people standing around observing just like I was doing. It is what the viewer expects. I knew I needed to get a different perspective. I asked myself, what was so different here? People were prostrating themselves in the road. In the West, we don't see this, so I knew I had to express this unfamiliar act by giving the viewer a sense of participating. To do this I actually lay down in the road and got at the same level as the pilgrims to show the scene from their perspective. This took getting dirty and risked getting walked on, but it made for a much more interesting image. As I said, they are both good shots, but they tell two different stories from two different points of view. Later on that same trip I visited a snake charmer's village. The villagers quickly got the snakes out to amaze the Westerner. It was impressive. People circled tight around the cobra and me. The more I shot, the more people came to watch. Soon the already-tight circle began to feel claustrophobic. I felt trapped with this snake. Maybe that was what the snake felt as well: trapped. That was it! If I got my camera down on level with the cobra and shot from its perspective, maybe I could communicate that tightly oppressed feeling that the cobra must be experiencing. That is exactly what I did. I used a super wide-angle lens and stuck the camera within inches of the cobra, tilting it up just a fraction to give the snake's angle of view.

Anyone can find their subject's POV — it's a matter of forcing yourself to think out of the box and putting yourself in the mind of your subject. Ask yourself, what do they see and feel, and how can I communicate that creatively? If you do this, you will soon begin to see your images rise to a new level. Dare I say, a new point of view?

Article and photos by Matt Brandon