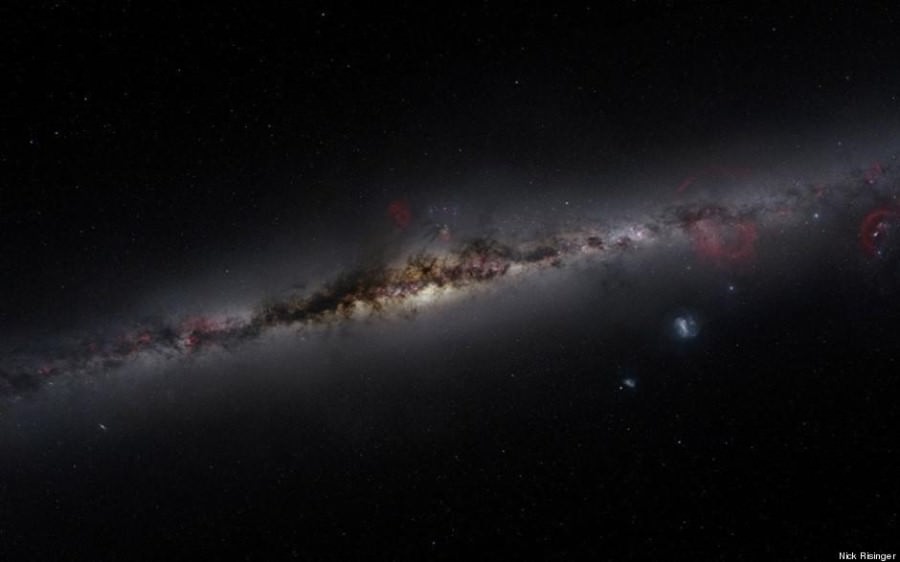 Humans have always been interested in the stars and the unknown. In recent decades technology has allowed man to send out probes to the far side of the galaxy to even landing on and exploring Mars. Personally movies like Apollo 13 and the most recent Gravity with Sandra Bullock and George Clooney illustrates in my opinion why we are so fascinated with the stars. We are only beginning to understand what amazing surprises the skies holds and looking at them can only make us ask more questions, apart from the visual enjoyment they give us.

This kind of fascination is what lead first-time astrophotographer Nick Risinger to give up his day job and set out on a quest to create a visual masterpiece. What he has accomplished is nothing short of amazing, given the tremendous amount of work and effort put into it. Risinger admits that his 360-panoramic view of the sky “is not a scientifical image” but instead it is “for educational and artistic appreciation”. `

So how did Nick Risinger create this masterpiece of an image? First of all, it is composed of 37,440 images, leading to a full resolution of 5,000 megapixels. It is the largest ever true color photograph of the night sky. Risinger lugged six synchronized cameras about 60,000miles to capture all these images. This wasn’t an overnight project by any means. He had to make a schedule for capturing the images from both the northern and southern hemispheres. He split the sky into 624 sections and entered the coordinates for each one of them into a computer.

He took the first photos with his brother in March 2012 in the desert near Topah, Nevada. It was then that he realized the monumental work that would be involved and decided that he had to quit his job.

While shooting in the U.S., he would drive with his father all day and shoot all night. The locations had to have as less light pollution as possible, had to be as high as possible and with less water vapor. Some of the locations included the Chiraichaua Mountains in Arizona, near fort Davis, and Lassen National Forest in California.

The cameras used were high-end monochrome imagers designed for astrophotography and equipped with a variety of filters. He pointed them in the exact same spots and continued uploading images into a laptop. Back in Seattle, where he currently lives, he began fitting the pieces of this giant puzzle together. He used special software to scan each frame and recognize patterns from a star data base and then he matched them with the other colors and frames.

Risinger admits he had trouble explaining what the whole thing was about, especially since a lot of the visits on his website came from people with some or no background in astronomy. But he continues saying that “once they see it, they get it”.

It’s projects like these that make those who say there is nothing that hasn’t been done yet think again, to say the least. What it proves is that it takes a tremendous amount of work and dedication and sometimes personal sacrifice, but I for one am sure that Risinger’s personal satisfaction has made all of this worth it.

Want to be amazed?  See the full high-definition version of this photo here.