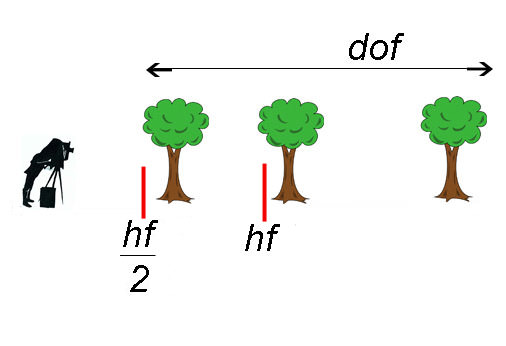 Hyperfocal focusing of your digital photography is a technique that will help you manipulate and extend the depth of field in certain pictures, such as a landscape, so the entire depth of the picture appears to be in focus. As you’ll learn when you read the PhotographyTalk.com article,
Digital Photography—Taming the Three-Headed Exposure Monster, Part 4, a smaller aperture, or lens opening, setting will also create more depth of field. Lens openings are called f-stops: The bigger the f-stop number, f/16, f/22 or f/32, for example, the smaller the opening.

To benefit from the hyperfocal focusing technique, you need a DSLR camera or an advanced point-and-shoot camera that has a manual-focus function and a lens with a series of markings. That scale reveals the depth of field of any picture you want to take and what part of the picture is in focus.

The Markings on Your Lens

It’s time to be up close and personal with the markings on your lens.
From behind your camera, you’ll see the distance scale on the top of the lens. This is calibrated in feet and meters, with an infinity setting. It looks like the numeral 8 on its side.
Next is the depth-of-field scale. It consists of a series of lines, one for each of the f-stops of your lens, and two marks of equal distance to the right and left of each f-stop.
The final markings on the aperture ring designate the f-stop you’ve selected.

Reading the Markings to Determine Focus

You can calculate how much of the depth of the scene you are photographing is in focus by knowing how to read the two marks on either side of the f-stop you’ve chosen. You’re taking a picture of your cat on a table, and the correct focus point on the cat’s eyes is three feet. You’ve selected f/2.8 for your aperture, or lens opening. Looking at the depth-of-field scale, you’ll see that the two marks on either side of f/2.8 indicate that a depth of three to three-and-a-half feet will be in focus. This is a good, narrow depth of field if you want your cat to appear as just about the only subject in focus.

Maybe there is a ball of yarn in the foreground with the end of the string in your cat’s paws. Now you may want to change your f-stop to 11, which will create more depth of field, approximately a depth of two to five feet will be sharp. Now, both the ball of yarn and your cat can be in focus.

For another digital photo, such as a landscape, you may want to focus on infinity, so a huge depth of the picture appears to be in focus. Only the mark to the left of the f-stop you selected is needed to calculate exactly how much depth of field you’ll create. For example, at f/5.6 on a 28mm lens, that depth in focus will be just a bit more than 10 feet to infinity. Change the f-stop to f/16, and now the focused depth increases from five feet to infinity.

Under “standard” conditions, the depth of field of a digital photo is one-third in front and two-thirds behind the primary subject. You can extend the depth of field, especially if you have secondary objects or space in the foreground that you want in focus, by setting the hyperfocal-focusing point. To do that, place the infinity symbol at the f-stop setting you selected on the depth-of-field scale.

For example, you’re shooting with a 28mm lens. When you use an f/11 aperture and focus on infinity, the depth from approximately nine feet from the camera to infinity will be focused. Use the hyperfocal-focusing technique and set the infinity symbol next to the “11” position and the foreground area in focus now starts at four feet from the camera, to infinity. Change your f-stop to f/16, and now hyperfocal focusing adds two more focused feet to the foreground (from five feet to three feet.)

Lenses with different focal lengths (28mm, 75mm, 200mm, etc.) and different ranges of f-stops will have different hyperfocal distances. You can find various tables online that list those differences. You may have a lens with a distance scale, but not a depth-of-field scale. The table will provide you with the hyperfocal focus points for that type of lens.

As is often mentioned in these PhotographyTalk.com How-To articles, reading your camera’s manual is always a good place to start to learn any digital photography concept and technique; and hyperfocal focusing is another.