This Photographer Captured the Instant Hot Tea Froze in Mid-Air

The Tossing Tea on the Tundra Photo Gives New Meaning to “It’s Cold Outside!” 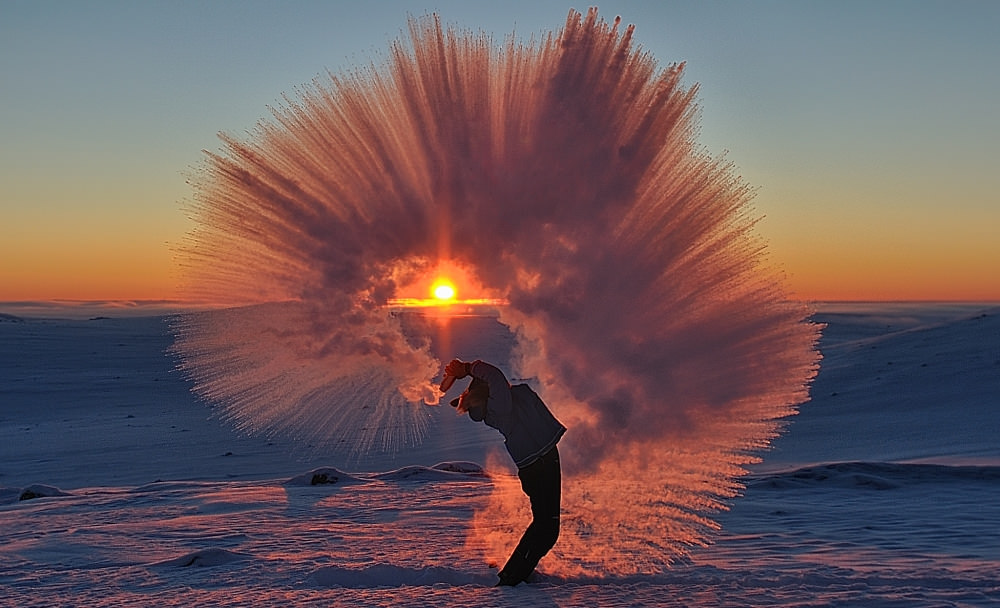 If you think it’s cold when you venture out for some wintertime photos, think again.

Photographer Michael Davies, who, with his wife Nicole, lives just 31 miles below the Arctic Circle in the tiny Canadian village of Pangnirtung, Nunavut, recently set out with a friend to photograph what happens when hot tea is thrown into the -40°C Arctic air.

The idea for the shot came from a variety of resources. Davies had seen photos of people attempting the tea shot, and, once he moved near the Arctic Circle, he was encouraged by numerous people to try it out. But, being the consummate professional he is, Davies didn’t want to do what other people had done. Instead, he sought to create an image that improved upon those he’d already seen.

The process of planning the Tossing Tea on the Tundra photo involved inspiration from several specific photographs. First, Davies was inspired by a photograph he saw of a person flinging hot water into the cold air. Second, he liked the look of steel wool lit on fire and spun around, something he did himself a couple of years ago. The third piece of inspiration came from those iconic wet hair flip photos you often see in fashion magazines.

Taking cues from these types of photos, Davies headed out for a location just a dozen miles south of the Arctic Circle to capture the image he had in his head. His friend Markus obliged by serving as the model in the shot. With daylight fading, Davies and Markus set about the task of documenting the moment the tea froze in mid-air.

The image above that has since gone viral was just the second take. The first and third takes have since joined the viral photo in popularity. So, three takes, three incredible shots, and a whole lot of well-deserved attention! 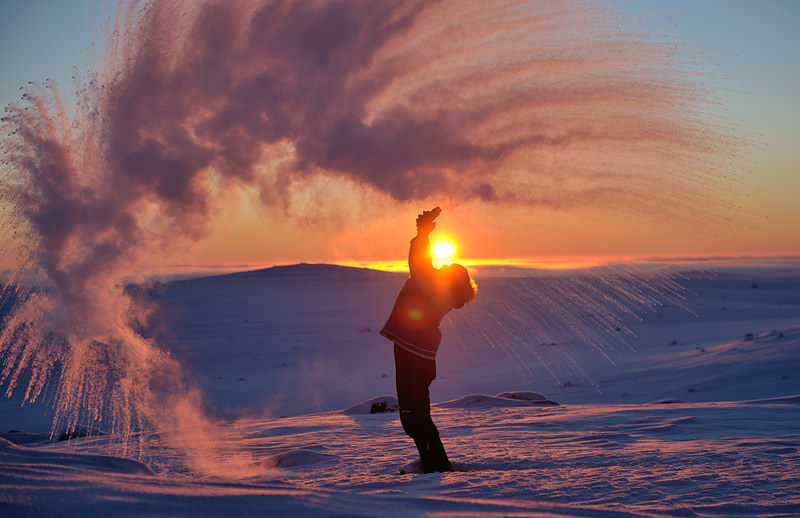 But to think that the Tossing Tea on the Tundra photos were easy to get would be a mistake. It was a 45-minute snowmobile ride to the top of a mountain to find the perfect spot where the setting sun would illuminate the surroundings. Once there, Davies had to set up the shot with the sun in the middle of the spray and hope that the wind remained calm.

And, things being what they are in the Arctic, Davies had to spend an abundance of time making preparations to ensure that he, Markus, and all the photography gear were well protected.

Davies expounded upon just one of the many dangers humans face in the harsh Arctic environment:

“Before we even talk about protecting gear one must worry about themselves. This is why I bring a large caliber rifle out with me. Polar Bears in my part of the world are a serious concern; they will smell a human out on the tundra and begin actively hunting. So the rifle comes along as insurance. And in MOST cases, if a bear is to come up on you a shot in the air is all it takes to have the bear turn and run.”

In addition to protecting himself and Markus, Davies obviously needed to ensure his delicate photography gear was protected as well.

Davies sealed his gear in good quality camera bags, which “helped the gear slowly acclimatize to whatever temperature they were going to be used in.” The massive difference in temperature between indoors and outdoors can thermal shock lens glass, so slowly getting the gear used to the bitter cold was a must. Additionally, if the seals in the lens have begun to deteriorate, one runs the risk of fog forming inside the lens. 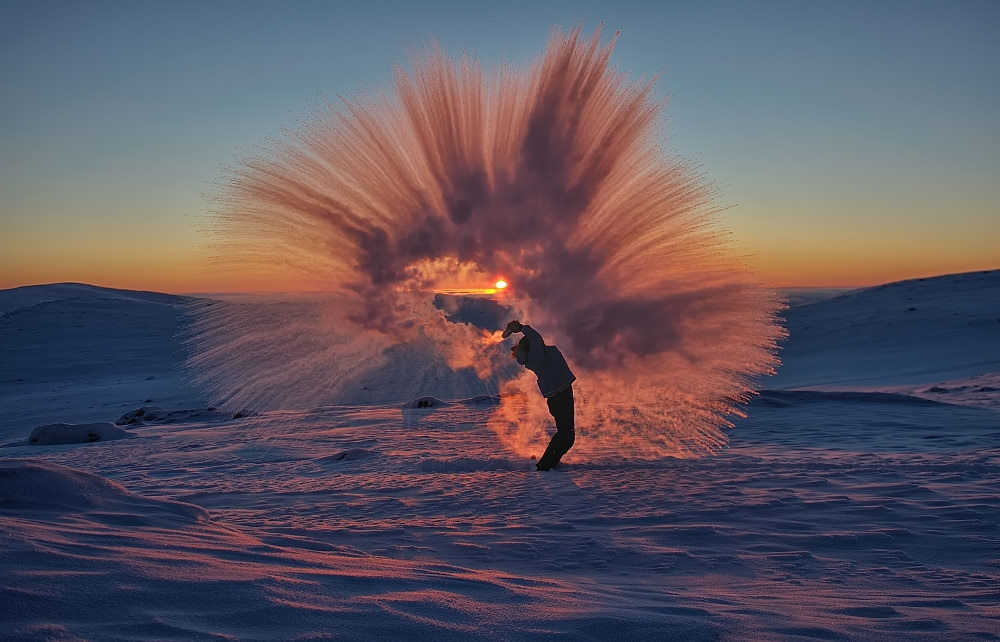 Once at the shoot location, Davies ensured he had at least one battery that was warm because “cold batteries just don't hold enough power to shoot with.” Apart from that, there really isn’t much else Davies needs to do to protect his gear for the shoot.

Of course, there were other considerations to make on the way home to prevent damage from occurring when cameras and other gear were reintroduced to the indoors. Slowly warming the gear up was just as important as it was to acclimate it to the outdoors. As a result, Davies keeps his gear sealed in a camera bag, plastic bag, or cooler to prevent condensation as the gear warms up.

When asked what he would recommend to others trying to emulate the tea shot, Davies offered this simple advice: “Keep positive and warm would be only the tip. If your are miserable and cold, your images will show it.”

Davies has lived in the Canadian Arctic for about ten years, during which time he has come to love photographing the area’s wildlife, people, and landscapes, with his trusty Nikon products. Connect with him online at www.michaelhdavies.com or on Flickr.