Finally, an Easy Way to Back Up Your Photos That's Reliable! 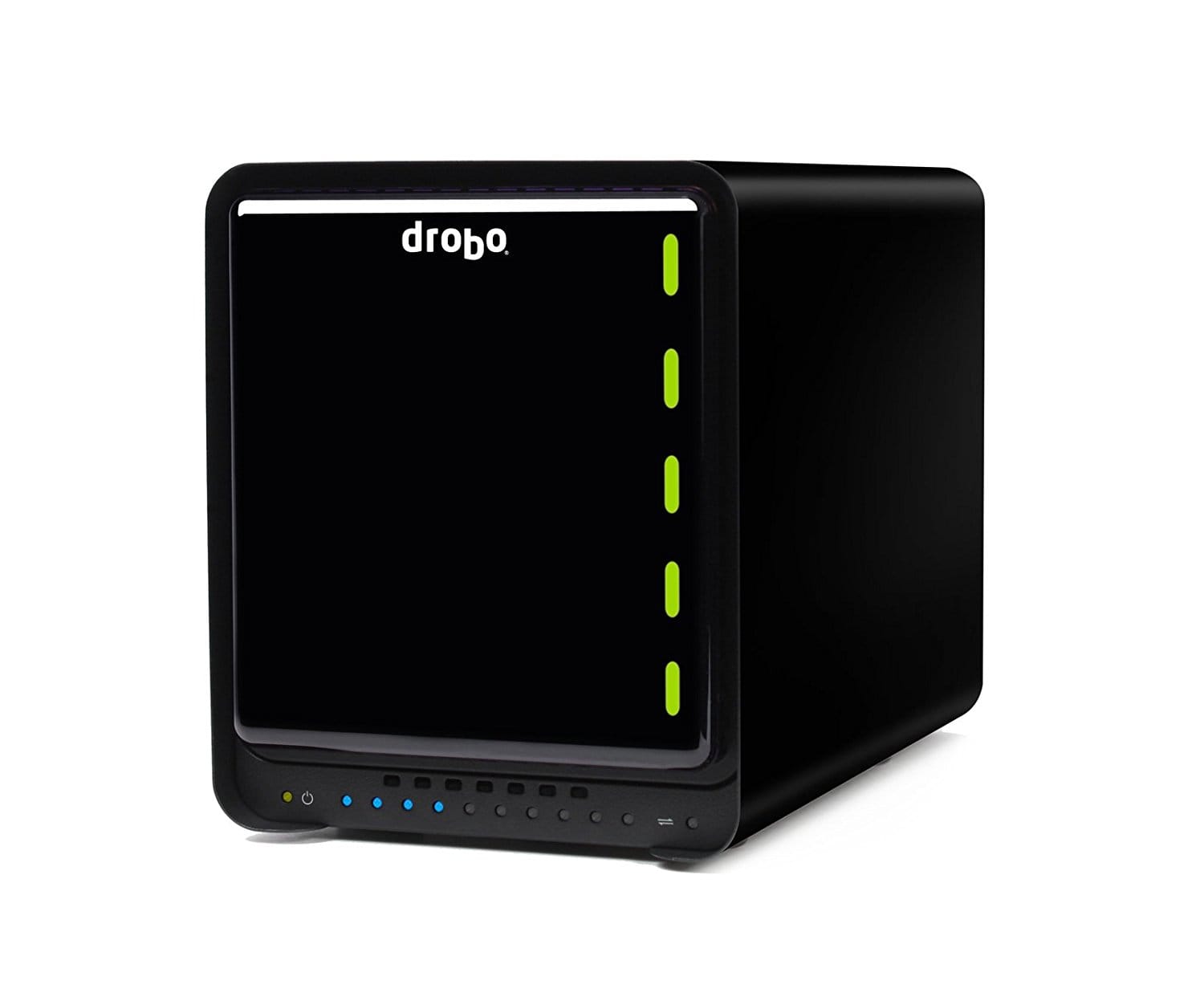 You have thousands and thousands of digital photo files that are scattered across various mediums and platforms.

You've got some in Dropbox, others in Google Photos.

There are various external hard drives with copies of your images, and perhaps a few thumb drives (or even CDs!) laying around with still other photos.

In a word, it's a backup system that's a mess.

But what if I told you there was a reliable and dead-simple way to backup your photos, even if you aren't a techno-nerd that understands how it all works?

That storage solution is called the Drobo 5N.

Below, I've got an in-depth review that introduces you to one of the best image storage solutions available today.

What is the Drobo 5N? 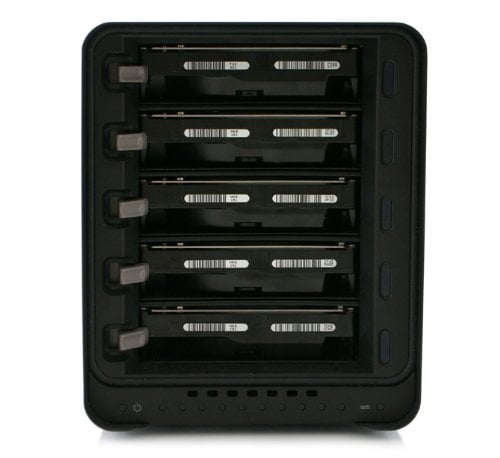 In no uncertain terms, the Drobo 5n is a high-performance storage solution that has top-shelf features but isn't at all complicated to use.

The Drobo 5N is a network-based device with a whopping 64 terabytes of potential storage space.

It's easily expandable and flexible to meet your growing needs for years and years to come. That means that you can insert a new disk drive into the 5N when the time comes for added storage, and that's something you can do without any tools whatsoever.

The 5N is equipped with a small and quiet variable-speed cooling fan, that way it remains cool but doesn't overwhelm you with loud cooling fan noises.

Perhaps better still, the Drobo 5N has an array of LED lights on the front that indicate when you're running out of storage space. It'll even tell you when it's encountered a problem with one of its drives so that you can take swift action and replace the malfunctioning drive before it damages any of your images or other files.

I wasn't kidding when I said it wasn't complicated!

It's also a small gadget, weighing in at just 8.6 pounds without the drives installed.

That means if you need it to be portable, it can be - and without breaking your back.

And since it's less than 6 inches wide, 7.3 inches tall, and just over 10 inches deep, you can easily find space for it on your desk without losing room to work. 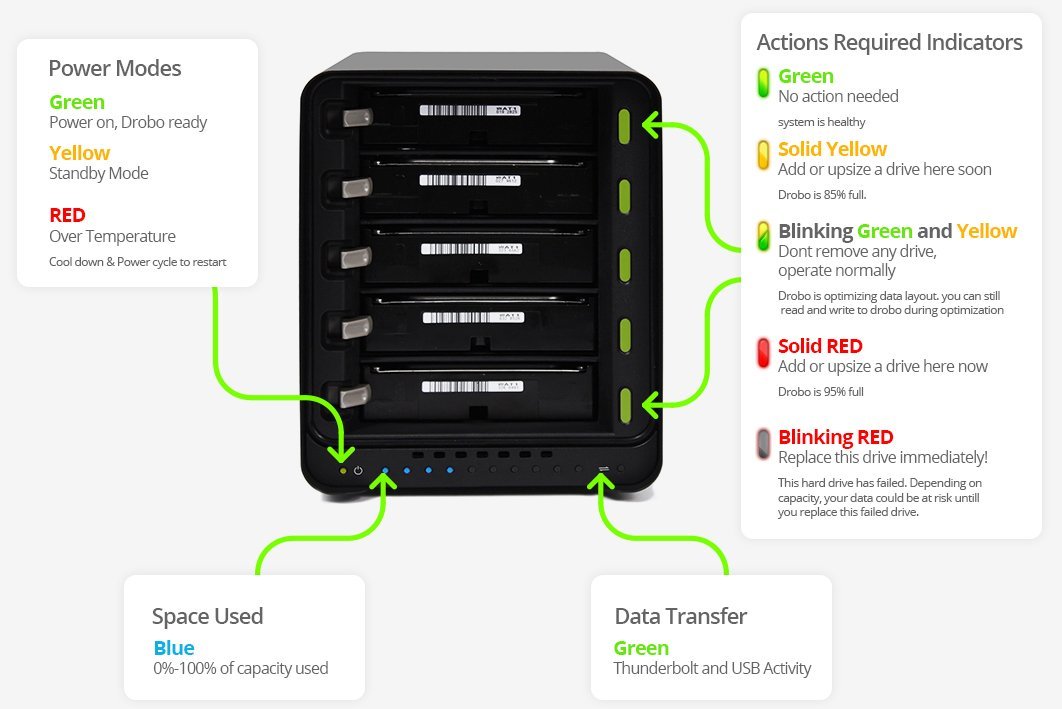 In today's day and age, having your files secure is of the utmost importance. That's something that Drobo took to heart when it developed the 5N.

With built-in security that includes active data corruption searches, you don't have to worry about losing files.

That means that you don't have to manually search for files that are causing problems - the 5N does it for you.

Another great feature of the 5N is that it was built to work with all sorts of disk drives from various brands and manufacturers.

That includes hard disk drives (HDD) and solid state drives (SSD) that dominate the market today. That means that if you have images on older HDDs, the 5N is still compatible. In fact, it'll perform drive pack migration on its own, so you don't have to worry about compatibility, drive order, or even downtime.

Maybe best of all, the Drobo 5N comes with an emergency battery.

That's a top feature given the sensitive nature of its purpose as a backup device.

With onboard battery power, that means that even if the power goes out, your data won't be at risk. Running on battery power, the 5N will be able to run a proper shutdown procedure to preserve your precious images and other data.

And since we live in an app-dominated world, the 5N comes with a suite of services through Drobo's Apps platform.

At the time of this writing, the Drobo Apps platform includes more than 100 apps that provide you with extended capabilities whether you work on a Windows or a Macintosh system.

Among those apps is DroboPix, an iOS support app that allows you to backup your photos and videos automatically from your iPhone, iPad, or iPod.

The image transfer occurs over Wi-Fi, so you don't have to use your cellular data, either.

See an in-depth review of these and other features in the video below by zollotech:

Also for users of Apple products is Time Machine support. That means you can backup your Mac system quickly and easily, and restore it if need be from the backup saved on your Drobo 5N.

Another handy app is MyDrobo, which gives you secure access to all sorts of services from the internet. You can use DroboAccess to view your files - be that photos, videos, or something else that's stored on your 5N - via a web browser and the Drobo mobile app that provides encrypted end-to-end access.

Something else for photographers featured on the Drobo 5N is Koken, a platform for you to manage your photos and even publish them. If you have a Wordpress website, there's support for that too, so you can find and publish the images you need for your next gallery or blog post with great ease.

On top of all of that, the Drobo 5N is built on BeyondRAID technology. That means you can have single or dual-drive redundancies, and the 5N will protect your files without any interaction from you as well.

Drobo even provides an online capacity calculator so you can figure out how your decisions regarding the drive size, protection levels, and the number of drives impacts the storage capacity of the 5N - and you can do all that even if you're not a tech junkie!

Usually, storage solutions of this caliber seem to require an IT specialist just to get the thing setup.

That's not the case with the 5N.

In fact, it takes just a few minutes to get the Drobo 5N online, even if you have no familiarity with things of a technological nature.

It's a matter of obtaining the right computer software for your system from the Drobo Dashboard so you can customize your 5N to your needs.

From there, you need to hook up two or more SATA 3.5 drives, connect to a router via an ethernet cable, and plug it into power.

It's really that simple!

As I've mentioned several times throughout this review, the Drobo 5N is great from a number of perspectives, but for me, its best feature is its ease of use.

You can literally have the thing setup and working for you in a matter of minutes, all without having to have a degree in computer science, either. Watch how simple it is to setup in the video above by Drobo.

And because it's a flexible and expandable storage solution, it's a device that's not just for novice photographers that want easy storage, but it's also an ideal solution for seasoned photographers with a need for a robust storage system that provides both convenience and security.

So whether you're just getting started in photography and you want to start out right with a great storage solution, or you've been in the photography business for a few decades and want to streamline your image backup system, the Drobo 5N is one of the better choices on the market today.

I've got one of these bad boys up and running in my office, and to say that it has made backing up my images and other files a complete breeze would be an understatement.

Learn more about the Drobo 5N.

Not sure how to take your camera, your skills, and start charging for it?

Take our Business Builders Course and join the photographers who have fast tracked their learning by uncovering the secrets to setting up a successful photography business in just 30 short days. 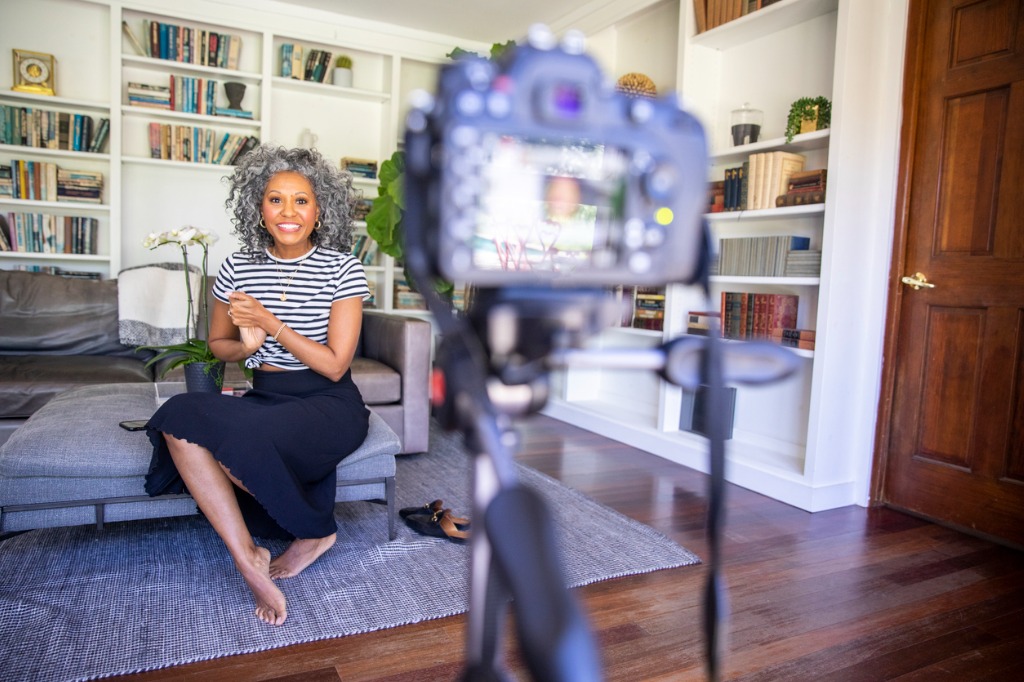 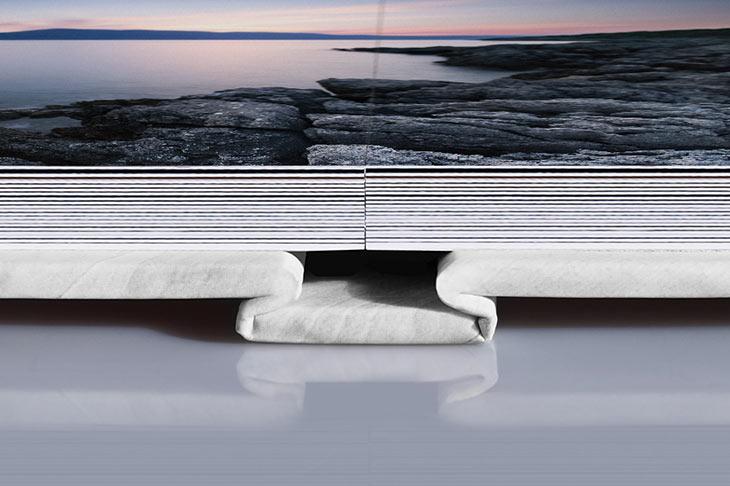 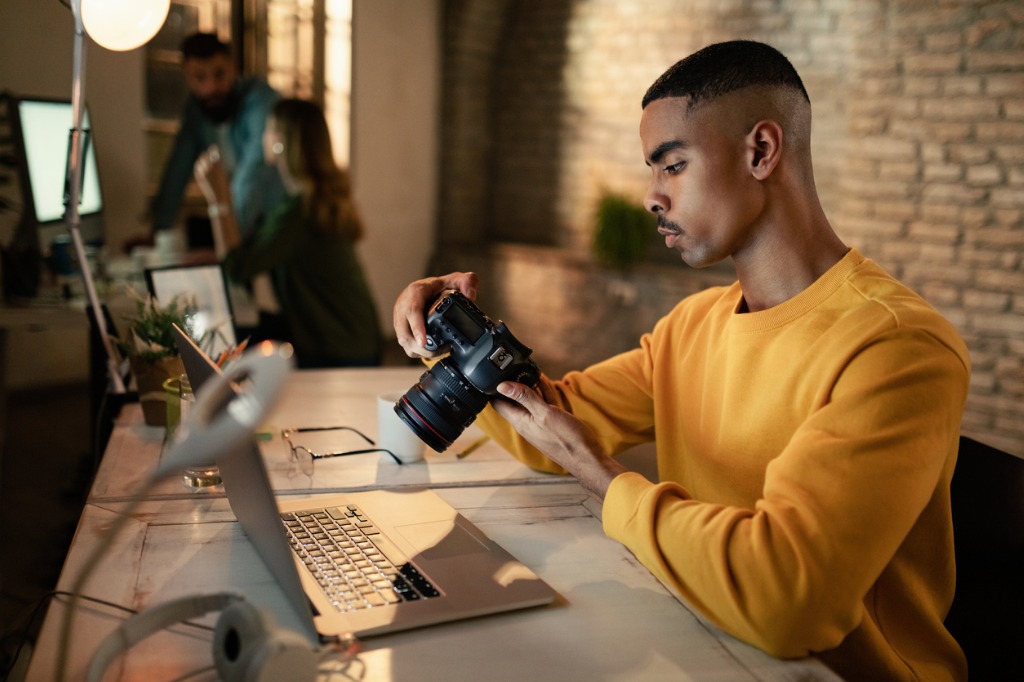 How to Grow Your Photography Business 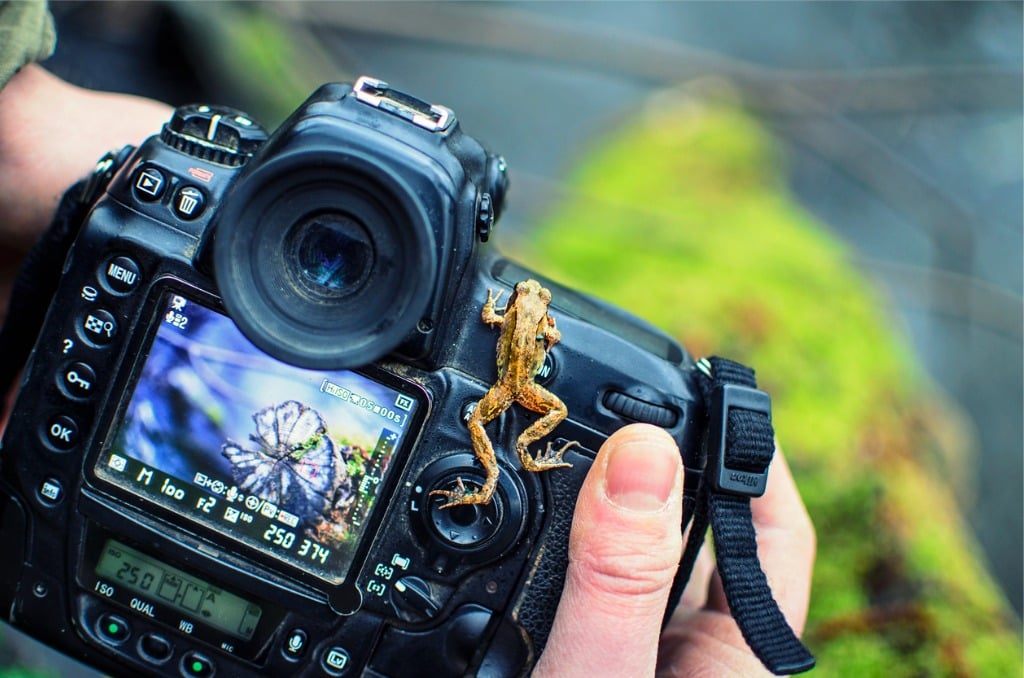