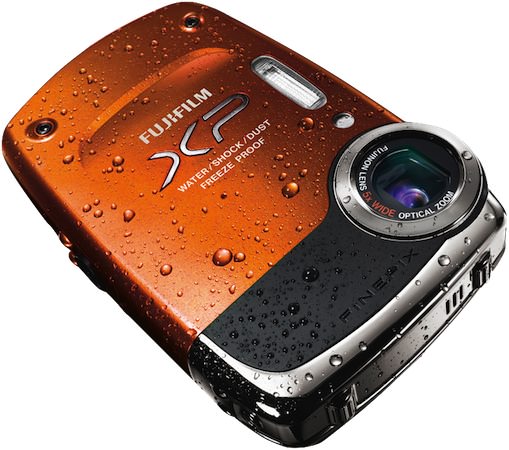 Digital photography technology has made it possible to squeeze more features into smaller cameras, so it’s much easier to shoot photos while hanging from a cliff, for example, as portrayed in a major magazine ad for the Fujifilm FinePix XP 20 compact camera. As advertising is wont to do, this may seem like an exaggeration, but in reality, the FinePix XP20 is not only perfectly suited to taking pictures while tangling from a rope, but also it’s waterproof, shockproof, freeze proof and dustproof. Drop it from as much as five feet; take it as much as 16.5 feet underwater; and expose it to temperatures as low as 14 degrees F (-10 Celsius) and the FinePix XP20 continues to operate.

That tough body design and construction protect a 14-megapixel CCD image sensor, a Fujinon 5x wide-angle optical zoom lens (28mm equivalent) and a 2.7-inch, anti-reflective LCD screen. The lens has specifically been reinforced with a hardened glass barrier. In addition, while scaling cliffs, diving to reefs or skiing cross country, you can also shoot videos as much as 720p at 30 frames-per-second (fps). It wouldn’t make much sense for Fujifilm to manufacture a camera for all those rugged sports and activities if it didn’t have dependable image stabilization, which the FinePix XP20 has.

Of special note is the camera’s face recognition system. After all, it’s unlikely you can place your subjects (family, friends, etc.), so the light is just perfect on their faces, as you’re kayaking through rapids or trekking across the dusty backcountry on an ATV. The Fujifilm FinePix XP20 was even designed to make uploading your photos to social networking sites fast and easy, as it only takes the push of a button. Take pictures of your companions’ faces on that river rafting trip and transfer files, even as the rapids are soaking everyone. Fujifilm has packed many more features into this little, somewhat indestructible compact camera: red eye removal, scene recognition, in-camera movie editing and panorama modes for both still photography and video.

A minor trade-off for all that protective construction is the lack of an electronic or optical viewfinder. In addition, a single charge of the camera’s Lithium Ion battery provides power for a maximum of 165 shots. Although that may be enough for a one-day activity, make sure you pack plenty of batteries if your activity or trip takes you beyond nowhere for days or a week. You can’t recharge batteries if there is no electrical service.

Fujifilm has also given the FinePix XP20 a stylish, sleek look that the market for this camera would expect to see in a modern, digital device, including five color choices: black, silver, blue, green, and orange. If you’re a digital photographer that also loves the great outdoors, and lugging your DSLR or camera bag down a river, up a cliff or through the woods is not an option, then the FinePix XP20 is the camera for you. There is also a XP30 model of this camera, which includes a geo-tagging feature. The XP20 is $199.95 and the XP30 is $229.95.

According to research from The NPD Group/Retail Tracking Service, the FinePix XP20 was the best-selling waterproof camera during 2009 and 2010.