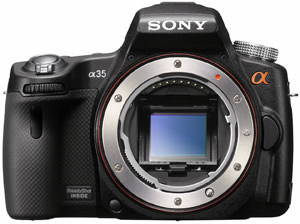 The Sony SLT-A35 camera is another competitor in the crowded DSLR entry-level market. Like many cameras at this price point, it includes big features that former compact camera users have never had in their hands and limitations that won’t bother most of them. Sony has positioned the SLT-A35 to be a subtle refinement of the original A33 and A55. The distinguishing characteristic of SLT technology is that these cameras have an electronic, instead of optical, viewfinder. This means there is no tilting mirror from which light is reflected to the viewfinder. The slightly translucent mirror in Sony SLT models doesn’t move. It directs light to a focusing sensor, which then passes the light to the imaging sensor.

SLT technology has helped Sony to reach its goal to offer a camera that has full-time live view and the fast, phase-detection auto-focus of most DSLRs. Both features are fully functional with the eye-level viewfinder and the rear screen. This technology has been best achieved in the Sony A55, so Sony included it in the A35, making these “compact,” moderately priced cameras very popular among hobbyists and enthusiasts. What is surprising, however, is that Sony removed the articulated screen that was part of the A35’s predecessors. This screen would have been a perfect partner with the full-time live view and the fast, phase-detection auto-focus during video recording.

The A55 also contributed its 16MP CMOS sensor to the A35, which Sony revamped in the process. Another noteworthy improvement of the A35 is its power use. Battery life is increased; but more importantly, there is less risk of overheating during video recording. This is a trait of most DSLRs, so they have built-in video-clip limits of 29 minutes or fewer. The Sony A35 can shoot the maximum of 29 minutes, which is advantage over the A55’s spec of 9 minutes per shot when the SteadyShot function is also active.

The other significant upgrade of the A35 is the inclusion of various image-processing filters, which were required to remain competitive with other cameras at this level. Sony calls this feature “Picture Effects,” one of the most popular is Toy Camera plus these others.

Other refinements to the Sony A35 are minor, but beneficial. For example, photographers that have more experience with an optical viewfinder will find it easier to use the A35’s electronic viewfinder because it will show just the image preview and AF point. In addition, photographic data is only visible when a setting is changed. Many photographers will also like the operation of the main menu. When you change a function, the camera returns to your previous position in the menu, so you don’t have to start from the beginning again.

To match the A33’s 7 frames-per-second, continuous shooting, the A55 is incapable of providing full-resolution images. The camera processes less data by reading an 8.4MP portion in the middle of the frame, which results in a 1.4x crop. This modifies the longer focal length of the kit zoom lens to 116mm compared to the standard 83mm.

The Sony SLT-A35 DSLR camera certainly includes all the features and capabilities that virtually every photographer new to the DSLR experience would want. Its limitations are few and these are only to keep the price at approximately $600 for the body only. Choose the kit that includes an 18–55 lens and it only costs another $100. Sony continues to position itself as one of the big three of camera manufacturers, turning many heads and money from Canon and Nikon; and the A35 is part of this trend.