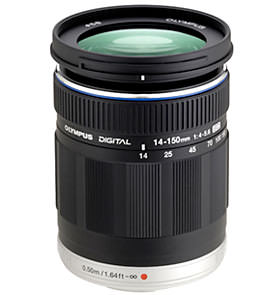 As the age of digital photography has progressed, camera manufacturers have been able to design and build innovative technologies, such as the Olympus PEN series, with its lower priced and simpler-to-use, mirror-less and interchangeable-lens models. The company is obviously a serious advocate of the advantages of Micro Four Thirds: smaller cameras, less weight and easier to carry. To make its PEN series appealing to that segment of the market that appreciates these benefits, Olympus has been introducing lenses for those cameras, such as the PEN Lite E-PL3.

The Olympus M. Zuiko Digital 14–150mm f/4–5.6 lens is the fourth to be introduced, and the first super-zoom, which provides an equivalent focal range of 28–300mm. Just as its PEN cameras are aimed at photographers upgrading from a compact to a camera with interchangeable lenses, the 10.7x zoom ratio of the Olympus super-zoom will be familiar to point-and-shoot users that have experience with 10x or greater zoom ratios on their compacts.

Of course, Olympus expects consumers to recognize the greatest benefits of a PEN series camera combined with the 14–150mm lens: it’s much easier to carry wherever they go, even in comparison with the smallest DSLR and a basic zoom lens, and it’s almost small enough to carry in a pocket. Many of the compact users who consider themselves ready for a DSLR often discover that they don’t want to carry all that weight; after all, they are not serious photographers or pros who are willing (or find it necessary) to haul plenty of equipment with them. Olympus is counting on there being enough buyers who will exchange some DSLR features and capabilities for a continuation of the compact experience; and the M. Zuiko Digital 14–150mm f/4–5.6 lens gives it to them.

Although the 14–150mm has the complexity of glass elements of all super-zooms (15 elements in 11 groups including 3 aspheric elements), it only weighs 10 ounces and, according to Olympus, has only 35% of the volume of comparable DSLR lenses. Auto-focus is quick and noiseless because only two lens elements are required for focusing. AF definitely outperforms Olympus's M ZD 14–42mm f/3.5–5.6 zoom that is paired with a PEN camera body into a kit. Plus, AF speed is essentially the same as on Panasonic G-series cameras. This is clearly a benefit to movie shooters. The Olympus lens is also built with a circular aperture diaphragm, which results in backgrounds that are very finely blurred.

Olympus designed its super-zoom lens for its PEN series of cameras, but this lens’ Micro Four Third mount also accommodates Panasonic cameras. Panasonic G-series users, however, will find this compatibility little consolation. The 14–150mm lens has no optical stabilization, but it doesn’t need it since that feature is built into PEN cameras. With optical stabilization lacking in G-series cameras, Panasonic owners are quite unlikely to want the non-stabilized Olympus lens. Their only alternative is to buy a more expensive Panasonic lens that does have an optical stabilization system.

As with any super-zoom, there will be optical limitations. The Olympus M. Zuiko Digital 14–150mm f/4–5.6 lens reproduces well above-average image quality in the middle range; however, at both ends of the focal range, corners are decidedly soft and some color fringing occurs because of lateral chromatic aberration. One of the advantages of the Micro Four Thirds system is that the technology will correct various distortions quite significantly. The 14–150mm shows virtually no signs of the substantial barrel distortion at wide angle and pincushion effect that are evident on many equivalent DSLR lenses. Zoom creep is another trait of many super-zooms; however, it doesn’t occur on the Olympus 14–150mm. Zoom creep is when the lens “moves” independently when it is carried, especially the pull of its weight when pointed toward the floor.

Taking into account all of the pros and cons of the Olympus M. Zuiko Digital 14–150mm f/4–5.6 super-zoom lens, including its $550 to $650 price range, it is an excellent pairing with a PEN-series camera. Together, they provide the image quality, portability and features for the market Olympus has targeted: the upgrading compact owner, hobbyist and enthusiasts that want to capture a wide range of digital photos.