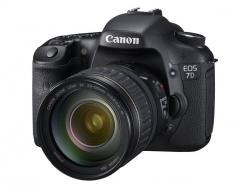 The Canon EOS 7D may appear to be similar to the EOS 50D, but, upon close inspection, it is much more than a simple upgrade. Canon is attempting to regain its prominence among cameras with APS-C sensors, which it first won with its X0D line of cameras (10D, 20D and 30D). By naming this model the 7D instead of the 70D and revamping the camera’s features and capabilities, Canon clearly wants the marketplace to think of the Canon 7D as a new beginning and not a simple extension of the X0D series.

The new viewfinder in the 7D offers 1.0X magnification and 100% coverage, which is a significant advance over the EOS 50D’s 0.95X, 95% finder. The 7D’s viewfinder even matches the Nikon D300S, without the need for the Nikon’s focal-length multiplier to boost the .094X view to 1.0.

The Canon EOS 7D is tightly constructed with magnesium parts, just as the 5D Mark II. The 7D body weighs just a bit less than a pound and a half (820g), with no batteries or memory card added. Canon has designed the 7D with an excellent grip, making it as easy as possible to hold, even during long shoots.

The EOS 7D body may not look much differently than the 50D or 5D Mark II until you examine the exterior controls. The buttons are large, which will be most appreciated during cold weather and when wearing gloves. Canon wants the 7D’s moviemaking capabilities to be considered a primary purpose of this camera, so it added a new control to switch from live view to video-recording mode and a button to start and stop their operation.

The EOS 7D’s 18-megapixel sensor is considerably bigger than the 50D’s 15.1-megapixel sensor, but not as large as the 21-megapixel sensor in the 5D Mark II. Even with that three megapixel difference, the 7D still produces excellent images and depth of field, making it much superior to any compact camera and many DSLRs.

The 921,000 dots of the EOS 7D’s LCD screen certainly produce a sharp view, but with the addition of the most recent gapless technology, there are very few internal reflections that typically impair contrast. The expansive LCD control panel, viewed at the top of the body, displays all the important camera settings and exposure data. The main numeric section of the panel serves a dual purpose by also showing other data, such as the “Busy” warning, AF point selection etc. It’s easier to read the metering timeout period with an orange light that is activated via the lamp button on top of the camera body. ISO sensitivity is always indicated, which is a standard feature of all Canon EOS DSLR cameras.

Although the 7D’s Dual Digic 4 processors are buried deep in its guts, they pack an amazing amount of power to give the 7D virtually flawless performance. The processors seem to consider the enormous 18-megapixel files mere morsels that are easily “swallowed” when processed. You are almost guaranteed never to wait for the EOS to be ready to shoot another image.

The 7D’s continuous shooting rate of 8 frames per second can be achieved almost “forever” when you insert a very fast card, such as the Sandisk Extreme Pro. Select RAW+JPEG, however, and the rate decreases to 7 fps. The 7D also has the option of a low-speed continuous shooting mode at 3 fps.

Auto-focus in the 7D does an exceptional job. First it locks focus almost instantly, which qualifies as a good choice for many sports photographers. It won’t match the 1D Mark III or 1D Mark IV, but they cost thousands of dollars more. Auto-focus on the 7D has few or any problems in low light, except for a little slowness. It’s so insignificant, however, that the camera’s maximum ISO of 12,800 is fully usable.

HD video can be shot at 1920 x 1080 pixels (1080p) at 30, 25 or 24 frames per second, or 1280 x 720 pixels (720p) at 60 or 50 frames per second. That’s a greater range of choices than the EOD 5D Mark II. Of greater importance is that the 7D’s standard manual controls are customizable to the subject matter and provide comprehensive control of shutter speed and aperture. Plus, there is a built-in internal microphone that records mono as well as a connection for a 3.5mm external microphone that will give you stereo.

It’s not surprising that the 7D’s video reveals some noise in low light conditions and high ISO selections, but it’s not very noticeable. What may be seen in the lower resolution of the 720p mode are jagged lines on diagonal edges. Again, it’s not a barrier to good video, but it’s important to know when considering whether to buy this camera.

You’ll have to look hard to find any flaws or problems in the Canon EOS 7D DSLR camera. Some photographers will find it preferable to the EOS 5D Mark II, especially if a full-frame sensor is overkill for the kind of photography they shoot. The 7D also stands tall in relation to its primary competitor the Nikon D300S, but any photographer considering either can’t make a wrong decision. The Canon EOS 7D is priced in the $1,400 to $1,600 range, body only.