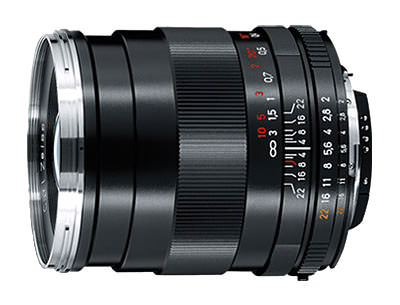 In a digital photography market that has been traditionally dominated by Canon and Nikon, Sony has made serious in-roads in recent years, vaulting to second in worldwide camera sales during 2010. It has moved past Nikon and is close on the heels of Canon because of its inventive “SLT” cameras, the mirror-less NEX system and a flood of low-cost DSLRs. Just as significant, however, has been Sony foray into high-end, full-frame gear, most notably a number of lenses carrying the Carl Zeiss name. The Sony Distagon T* 24mm f/2.0 SSM lens is a perfect example, as it is capable of serving the needs of Alpha 850 and 900 camera owners as well as those with APS-C cameras who want a semi-wide 35mm equivalent.

The optics are where the quality and value of a lens is proven, and the Distagon T* 24mm f/2.0 takes the first step to the top with nine elements in seven groups, including two aspheric and two Extra-Low Dispersion glass elements to prevent aberrations. Then, Sony took an even bigger step by adding a built-in, ultrasonic-type SuperSonic Wave Motor, the first in any Zeiss prime lens. Finally, a circular aperture diaphragm, of nine curved blades, helps to control bokeh, giving those parts of the image that are not in focus that soften, pure look.

It would have been disappointing if this 24mm f/2.0 lens didn’t have the classic lines of Sony’s other Zeiss lenses; fortunately, it does. You can virtually feel the quality when you hold the solid metal body and turn the extremely smooth focus ring. Just as elegant is an internal design where the rear group of elements moves instead of the exterior of the lens to achieve focus. You’ll find a big, round AF/MF switch and Sony’s standard Focus Hold button on the outside of the lens.

The Distagon T* 24mm f/2.0 is also quite versatile. Its best partners are the full-frame Alpha cameras, but it also feels well balanced on smaller bodies and can even be used on mirror-less NEX bodies, with the LA-EA1 adapter. Attach this lens to lower-priced models, however, and it will become front-weighted.

Performance is where this lens shines. Even at the widest aperture, the sharpness is superb and there is very little lateral chromatic aberration or distortion. Sony's SuperSonic Wave Motor offers exceptional auto-focus functioning, as it is almost dead quiet, quick to move into position and undeniably precise on a number of camera models. Focusing is further enhanced with Direct Manual Focus, which provides the user with the freedom to fine-tune the focus manually, even when auto-focus is activated.

The Sony Distagon 24mm f/2.0 lens is not without its issues, the most challenging is its tendency to produce flare when directed at bright light sources, especially with full-frame cameras. A large, red flare occurs with the sun near the edge of the frame or just beyond it. This may not be so obvious when looking through the viewfinder, so users must remind themselves to check the image review.

Users of this lens must also be aware that the mount is not sealed, which is, no doubt, why Sony doesn’t claim the lens to be dust- or moisture-resistant. This is certainly a competitive difference between the Sony lens and the 24mm Canon and Nikon lenses, which are well sealed.

Photographers contemplating the purchase of the Sony 24mm or either the Canon or Nikon equivalent may be concerned that the Sony lens is slower at f/2.0, while the others are f/1.4. Any fear of a lack of performance is unfounded, however; first, because it’s not much of a difference and, second, because the Sony 24mm can deliver equal optical integrity. Anyone considering the Sony lens, and shoots with an Alpha DSLRs, will discover that these high-end Sony cameras have built-in image stabilization, which more than compensates for the less light the f/2.0 lens captures.

If your digital photography has become serious enough to invest either in a full-frame or APS-C camera, then the Sony Distagon 24mm f/2.0 lens is an outstanding addition to your gear. It has the capabilities, first-rate performance and a competitive price tag at approximately $1,300 to make its purchase a smart consumer and photographic choice.