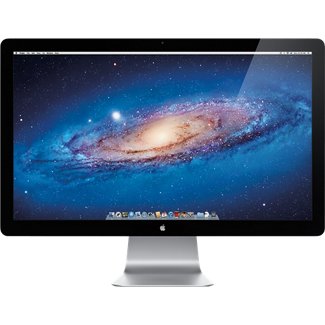 1.    The 27-inch Apple Thunderbolt Display is the first with the Thunderbolt I/O technology that Apple developed with Intel. Without sinking too deep into the “geekness” of this technology, the important distinction to understand is Thunderbolt I/O is rated as twice as fast (10Gbps) as USB 3.0 (5Gbps) with just one cable. Plus, Apple claims it is as much as 20 times faster than USB 2.0 and 12 times that of FireWire 800.

2.    Apple never seems to shrink from its exclusivity strategy, even within its product line; for the Thunderbolt Display is definitely aimed at the users who own a Thunderbolt-enabled Mac or are planning to purchase one. It is not compatible with PCs or older, non-Thunderbolt Macs.

3.    Despite the relatively small number of people who can join the Thunderbolt club, many of this display’s features are the same as the Apple Cinema Display, which results in an equally amazing picture, superior performance and ultra-quick connectivity.

The matching features include a 16:9 ratio and 2,560 x 1,400 resolution, an ambient light sensor, a built-in camera and microphone, built-in 2.1 speakers and three USB 2.0 ports positioned at the lower back.

4.    The Thunderbolt Display is also quite incredibly stable, given its 24-pound weight and the “duck-foot” stand that covers so much ground (7.4 inches wide by 8.2 inches deep).

5.    The display can be tipped back 20 degrees, but it neither swivels nor pivots, and the screen’s height can’t be changed.

6.    Other than the obvious Thunderbolt connectivity, this display is enhanced with an additional gigabit Ethernet port and a FireWire port.

7.    The Thunderbolt Display’s connectivity options will be important to MacBook Air owners. They won’t be limited to Wi-Fi, since the Thunderbolt will deliver full-wired Ethernet speeds when the display is connected to an Ethernet port.

8.    Although the Apple Thunderbolt Display is not compatible with PCs, you can use Windows on a Mac with Boot Camp.

9.    For graphic artists (and photographers), the Thunderbolt Display rates very high for text legibility. According to third-party examinations, small text tested at 5.3 points, the smallest on the DisplayMate Scaled Font test.

10.Photographers will be specifically attracted by the Thunderbolt’s incredibly precise and brilliant color rendition. During the DisplayMate Color Scales test, those third-part examiners saw highly consistent colors and no over-saturated reds, greens or blues. Grayscale quality was equally terrific, displaying the light shades of gray particularly well and the details in the shadows will make most every photographer happy.

11.Viewing angle is another critical factor for photographers and graphic artists; and the Apple Thunderbolt Display’s ISP panel creates an excellent width of angle. As should be expected, it outperforms standard TN+ panels, with an absence of color shifts or the dark screen effect.

12.When you are ready to take a break from creating graphics or editing photos, the Apple Thunderbolt Display’s many stellar features makes it perfect for a bit of gaming or movie viewing.

13.Of course, you’ll pay for all these features, performance and the Thunderbolt Display’s added connectivity, but if you’re already a card-carrying member of the Apple club, then you know the price is always worth it. The 27-inch Apple Thunderbolt Display is priced from $960 to $980.