8 Amazing Benefits of the StackShot for Macro and Product Photographers 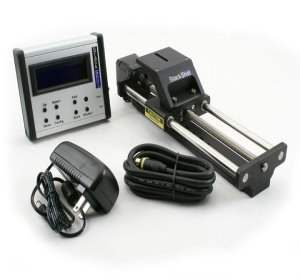 StackShot is another clever bit of engineering from the genius dudes at Cognisys. Macro and product photographers are familiar with the challenge of shooting small objects, so their entire depth is in focus. A single frame from a camera and macro lens can only record an extremely shallow depth of field. The insect’s eyes are in focus, but not its body; the flower’s stamen are sharp, but the petals blurred; the primary stone in a diamond ring is in focus, but its difficult to identify the minor stones and the ring, itself, is very fuzzy.

Many macro and product photographers use the focus-stacking technique to give their final images much more depth of field. They shoot multiple images of the object, and then combine them with any of a number of editing software to create a final photo with greater depth of field. The camera is attached to what is called a “macro rail.” It allows the camera to slide forward and backward in relation to the object, capturing multiple images at different distances on the rail.

2.   Until Cognisys introduced StackShot, the photographer had to move the camera and adjust each position on the rail manually. Not only is this process tedious, but also the camera can’t be moved the precise distance every time it is repositioned.

Because StackShot includes both a macro rail and electronic controller, it automates the focus-stacking technique. The photographer connects the equipment and configures the controller for the number of photos and the distances from the object. StackShot delivers precise rail navigation, programmable for the entire length of 100mm or at less than 2mm (micrometers).

3.   It’s the operational flexibility of StackShot that will catch the eye of most photographers. The system provides 5 functional options. In Automatic, the photographer moves the camera to the start/stop position. He or she programs the system with the number of stops or distance, and StackShot does all the work. The second option is Total Distance. The photographer chooses the desired travel distance of the sequence and the number of shooting positions. Distance Per Step works much the same as Total Distance. Instead of the total distance, the photographer chooses the interval between each stop and how many stops. The StackShot can also be operated in a Manual mode. With each push of a button on the controller, the camera moves the programmed distance. Continuous mode allows the photographer to move the camera a desired distance without stops.

4.   With StackShot, the macro photographer is able to change exposure settings on the camera with the auto-return feature. Once the photographer makes the exposure changes, StackShot repeats the previously programmed sequence of rail positions.

5.   Speed is a primary benefit of using StackShot. Many macro photography subjects and objects are only available for a very short time: the bee has moved to the next flower, the wind blew the little object from in front of your lens, suddenly the reflections off the jewelry has gone bad, etc. StackShot is not just automated, but fires a sequence of images quickly, with no concern as to whether the camera was bumped.

6.   The guys at Cognisys know that it is an absolute must for macro photographers to retain control of the shooting process. StackShot operates as the photographer configures the system; and nearly every parameter is adjustable, so the photographer is still creating the picture. Program the trigger times, number of images per stop, maximum speed, ramp time, camera settle time, etc.

7.   StackShot’s power options make it easy to use it in a product photography studio or the wildest backcountry. It uses AC, and will also operate on battery power. Cognisys offers a Li-ion Battery Kit as one of its products’ many accessories.

8.   The Cognisys Web site (cognisys-inc.com) has additional information about StackShot and how to use it to create excellent macro images with stunning depth of field. The StackShot Macro Rail Package is available directly from Cognisys for $525.00 and can be ordered at http://www.cognisys-inc.com/catalog/index.php?cPath=24&osCsid=5ffaf1ac247176088fdfb30f4a1b19d7.

Feel free to visit our Tripods, Bags and all "Other" Accessories forum