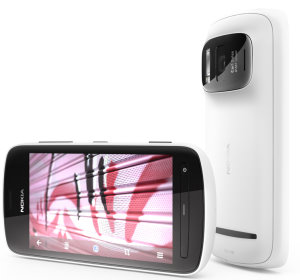 PhotographyTalk doesn’t typically review smartphones, but has published a few articles to show how the digital photography technology in smartphones is quickly matching or exceeding the capabilities of many compact, or point-and-shoot, cameras. Another step in that direction has taken place with the introduction of the Nokia 808 PureView Smartphone during the Mobile World Congress in Barcelona, Spain, late February 2012.

According to reports, manufacturers didn’t overwhelm Congress attendees with their new product announcements until Nokia took center stage. The Finnish company unveiled its new 808 PureView Smartphone and its 41-megapixel camera!

Amazingly, the people at Carl Zeiss were able to engineer this huge sensor on an f/2.4 camera. The sensor is approximately 10x7 mm, or 1/1.2”. Nokia considers itself a leader in cameraphone design, which was the case during 2010 with the company’s 12-megapixel N8. With the 808 PureView, it has made a giant leap forward.

The details of exactly how those 41 megapixels work are intriguing. The number of operational megapixels is dependent on the shooting aspect ratio. At 16:9 (7728x4354), “only” 34 megapixels are utilized; 38 when the ratio is 4:3 (7152x5368). Another interesting function is that the Nokia 808 reduces the size of the huge files generated by a factor of 7. The JPEG files of 10 megabytes are scaled to 5-megapixel images. The resolution (2580x2048) is more than acceptable and the images take much less space. On the video side, this Nokia smartphone records 1080p movies, with quality every bit as good as still images.

It’s inconceivable that a cameraphone, such as the Nokia 808 PureView, will competitively challenge compacts and the newer interchangeable lens cameras, given the physical limits of a smartphone. It’s difficult to use the word “can’t” or “won’t,” however, considering this new smartphone is packing a 41-megapixel sensor. The moral of this story is that cameraphone technology is moving ahead rapidly, bringing everyone closer to the day when the great majority of the population, which shoot casual photos and video clips, won’t need a separate or large camera. More than enough technology will be built into a smartphone.

Initially, the Nokia 808 PureView Smartphone is being release outside the United States during April/May 2012. A U.S. release date has not been announced, but rumors state the price will be approximately $600.