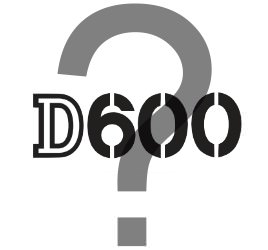 If you’re a digital photographer who prefer Nikon cameras or are contemplating the purchase of your first Nikon DSLR, then take heart and maintain your patience. With each passing day, you (and the digital photography world) come closer to having an added choice, the Nikon D600 DSLR.

Long rumored, the D600 was previewed (albeit sketchy) in a PhotographyTalk article of late April 2012. Now, the picture is becoming clearer; in fact, at least one Internet source is displaying a picture of the new DSLR. It’s only speculation, but Nikon may have been waiting for Canon’s announcement of the new EOS Rebel T4i. With this new Canon DSLR at the top of its entry-level line of Rebel digital cameras, Nikon may be aiming for a competitive challenge. The D600 will reportedly be an entry-level full-frame, or FX, DSLR and priced as low as $1,500, which puts it in the range of the Rebel T4i that is definitely priced at $849.00 for the body only.

In that previous PhotographyTalk article, the only details of features and specs of the Nikon D600 were “an Auto DX crop mode, dual SD card slots, a built-in time-lapse function, in-camera RAW editing, new external battery grip and, possibly, GPS.”

During early May 2012, one Internet source estimated that these details and a few new specs were approximately 60 percent accurate.

Additional reports during early May 2012 suggested other details of the Nikon D600 DSLR. A number of them contradicted earlier rumors, which then became “facts” more recently. It is now an 80 percent certainty that Nikon will announce the D600 prior to Photokina, which will take place during September. Of course, an announcement is not a release; and there is no information yet, as to when you could actually buy a D600.

Another juicy tidbit is that during the D600 announcement, Nikon will unveil possibly more than one f/4 lens, priced for the DSLR entry-level digital photographer. This rumor may have some more teeth, since Nikon has reportedly filed a patent for a 24–70mm f/3.5–4.5 full-frame lens, making it a likely companion for the D600.

The Nikon rumor mill’s latest grindings of late May 2012 produced a longer and more detailed spec list for the D600 DSLR, plus an important correction. The April PhotographyTalk article mentioned the possibility of a GPS unit. Now, supposedly, it won’t have GPS functionality. Plus, the 39 AF points, with an option of 11 AF points listed above has been further identified to include 9 cross-type AF points.

Whatever the final configuration of the new Nikon D600 DSLR, it’s interesting to contemplate what impact it will have in the marketplace. It’s poised to do particularly well because, when you consider the specs as a whole, there appears to be many high-end, pro-level DSLR features and functions available in a supposedly $1,500 camera. The D600 becomes a very marketable solution for the much larger market of DSLR hobbyists and enthusiasts who can’t afford a D700 or higher. Now, they have the opportunity to shoot and create with much greater specs.