First Look at the Sony Cyber-shot WX300 Compact: Aiming to be the Perfect Travel Camera 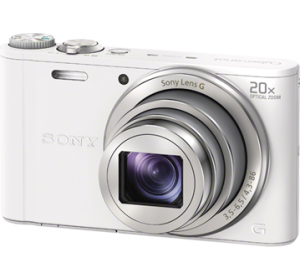 Who knows how much life remains for the compact camera market, but the inevitable merging of the smartphone and the pocket-sized shooter isn’t stopping the major camera manufacturers from riding this wave until it’s just a trickle in the sand. To that end, Sony released the Cyber-shot WX300 during late February 2013. Of the three new Cyber-shots announced at the time, the WX300 may be the most interesting.

When you take into account all of its new features and capabilities and its size, Sony would appear to have had casual travel photographers in mind when it decided to bring this camera to the marketplace. Since manufacturers have been able to pack so much picture-taking technology into these small compacts that was unimaginable just a few years ago, serious amateurs and even professionals might find the WX300 a great second camera for vacations. It’s a much better alternative that lugging a big bag of DSLRs, lenses, etc.

The physical size of the sensor, at 1/2.3 inches, is common for a compact, but 18.2 megapixels is still an amazing spec, even though the models the WX300 are replacing—the HX20V and HX30V—and many similar compacts have the same sensor, an Exmor R CMOS.

The 20x optical zoom Sony G lens has an effective focal length range that is the equivalent of 25–500mm in the 35mm format. Plus, it delivers maximum apertures of f/3.5–f/6.5. At the wide-angle end, you’ll be able to capture beautiful architecture during your travels and well-composed landscapes with a prominent foreground feature balanced against a spectacular backdrop. The new Sony WX300 would serve as a great street camera for shooting from the hip and quickly inserting it into the middle of any activity and taking a picture with no one the wiser. Choose the mid-range of the focal length for portraits and use the telephoto end to compose excellent travel images tight to the frame that you must shoot from a distance.

The “miniature” size of the WX300 and the zoom power of its lens may be the obvious attractions. What may be of even more benefit to travel photographers who choose this camera is that the autofocus speed has increased by approximately three-and-a-half times and Sony’s Optical SteadyShot™, or optical image stabilization technology, is twice as powerful as found in the compacts the WX300 is replacing.

This kind of camera and targeting it to travelers and vacationers wouldn’t make sense unless it also had quite a comprehensive Wi-Fi connectivity package. Sony’s PlayMemories mobile app is available in Android and iOS versions and is how you share photos and videos with this camera. As is becoming common on many cameras with Wi-Fi, you can use the WX300 as a remote point of control through your smartphone or tablet. There is even less likelihood of camera shake and blurry images if you use this feature to trip the shutter under very low-light conditions instead of a finger, or to make it easy to capture self-portraits and from within a group of friends.

Other features of the new Sony Cyber-shot WX300 that are essential to the travel photographer are Full-HD 1080/60i AVCHD™ video, including shooting stills and video simultaneously; 3.0-inch, 460,000-dot ClearPhoto™ LCD; and an extended battery life that allows for as many as 500 photos on a single charge.

The new Sony Cyber-shot WX300 compact camera has an estimated ship date from Sony of early May 2013. The camera can be pre-ordered from Sony for $329.99.

Check Amazon between now and the release date to pre-order the Sony Cyber-shot WX300, and probably at a lower price than its MSRP.