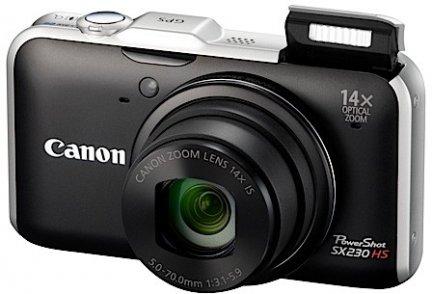 The four new PowerShot Digital cameras from Canon—SX230 HS, ELPH 500 HS, ELPH 300 HS and ELPH 100 HS—offer a wide range of features for the casual photographer who wants both ease-of-use and quality picture taking. These include Canon’s HS System, which makes it easier to shoot better pictures in low light, full 1080p HD video, new Movie Digest Mode and 32 Smart AUTO scenes. The PowerShot ELPH 300 HS is the world’s thinnest camera with a 24mm wide angle, 5X optical zoom lens. The PowerShot SX230 HS is equipped with GPS to record the exact location of every photo.

Canon’s HS system is able to improve photo quality in low-light conditions because of the combination of Canon’s DIGIC 4 Image Processor and the very precise CMOS sensor. Together, they reduce noise at high ISO levels and enlarge the camera's dynamic range, which results in digital photos with greater detail and more saturated colors in dark settings.

The GPS feature in the PowerShot SX 230 HS is especially useful if you want to identify the location of a vacation or family gathering many years later. The camera has a receiver that communicates with GPS satellites and records the exact latitude, longitude and altitude of every shot and includes it in the EXIF data. The SX 230 HS also has map utility software. Photos can be viewed on a map, revealing the location of every shot. The internal GPS logger tracks your vacation or travel route on a map, so you can easily pinpoint where you were throughout a day or week.

With the full 1080p HD video and dynamic image stabilizer, you’ll shoot excellent video in a compact camera that you can take anywhere. The Movie Digest mode allows you shoot short video segments, and then return to taking still digital photos. Later, you can combine all the video segments into one seamless program.

Advanced Smart Auto is another feature that makes the Canon SX230 HS, ELPH 500 HS, ELPH 300 HS and ELPH 100 HS easy to use during busy days and an active lifestyle. Smart AUTO matches your image with one of 32 different shooting scenes, so you don’t have to switch modes and miss the picture you wanted. Advanced Subjection Detection is an embedded Smart AUTO function that helps you capture swiftly moving objects. Press the shutter button and Advanced Subject Detection automatically identifies any moving objects. The focus and exposure of the moving subject continues to be tracked with the Servo Auto Focus/Auto Exposure, so you can record it before it’s gone.