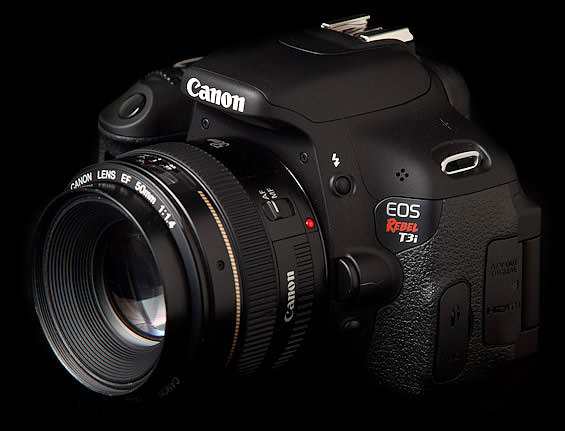 Digital photography equipment buyers have a choice of two new Canon DSLR cameras that were introduced during March 2011. PhotographyTalk.com reported on the first in the article, Digital Photography Equipment Review—Canon EOS Rebel T3 DSLR. The companion EOS Rebel T3i DSLR is Canon’s lead Rebel camera. It includes many easy-to-use features that will help photography enthusiasts advance from a point-and-shoot camera to their first DSLR. Canon T4i  camera has amlost similar features as T3i except video quality.

The Rebel T3i shares many of the same high-quality features with the T3, including Scene Intelligent Auto and Feature Guide instruction. They are described in the T3 article. Digital photographers will find additional features on the Rebel T3i to improve their skills and results: HD video capture, a three-inch Vari-Angle Clear View LCD screen, Video Snapshot technology and other outstanding specs.

With full-HD video capture at 1920 x 1080 resolution in selectable frame rates of 24p, 25p or 30p, the EOS Rebel T3i offers the quality and versatility that even film students and independent filmmakers will like. A DIGIC 4 Imaging Processor and a large APS-C–sized CMOS sensor are Canon proprietary technologies that captures fine detail and color to create excellent HD video. The Rebel T3i DSLR offers three video recording modes: Full HD, HD in a 16:9 aspect ratio and Standard Definition (SD) in a 4:3 aspect ratio, all at selectable frame rates. Canon T7i provides higher fps(fulll HD videos at 60 fps) than T3i.

A large three-inch Vari-Angle Clear View LCD screen is a first-time feature in any Canon Rebel DSLR. Digital photographers will have a bright, clear view from any angle with 1,040,000 dot/VGA resolution and anti-reflective and smudge-resistant coatings. The concept behind the large Vari-Angle screen is to provide digital photographers with a greater “variety” of shooting angles. Low-angle or overhead still pictures or full-HD video are much easier to compose.

Canon has applied some of the innovative technology from its VIXIA line of camcorders to create the new EOS Video Snapshot feature in the Rebel T3i DSLR. Canon achieved its goal of providing its customers with a video capability that is as easy as taking digital photos. Anyone can now record a series of two-, four- or eight-second video clips automatically. The T3i then creates a continuous Video Snapshot Album with those clips…in the camera. Photographers can then perform additional editing, either in the camera or with Canon’s Video Snapshot Task software on a compatible personal computer.

Digital photographers that want a full-featured DSLR will love the Rebel T3i’s 9-point Auto-focus system, a 63-zone dual-layer metering system and new Creative Image Filters. Photographers can add vignetting and color shift, with the “Toy Camera” filter, and also make a scene appear like a small-scale model, with Canon’s Miniature Effect filter. The camera shoots as many as 34 consecutive full-resolution JPEG still images or as many as 11 consecutive RAW images at speeds to 3.7-frames-per-second. The Canon EOS Rebel T3i accepts SD, SDHC or new extended capacity SDXC memory cards and can be paired with all of Canon’s more than 60 Canon EF and EF-S lenses.