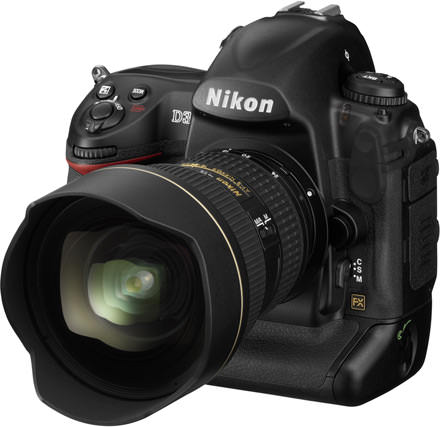 Digital photography took a large leap forward for many serious enthusiasts and pros when Nikon introduced the D3S DSLR camera, as an upgrade of its earlier D3. The differences in the two Nikon models are not immediately apparent, since the bodies look virtually the same. The D3S, however, has several important improvements that certainly distinguish it from the D3, when you take a closer look. Careful investigation is a good idea since prices for the Nikon D3S (body only) range from $5,200 to $6,400.

A major enhancement is 720x1280p video capture mode. Nikon has also made some minor upgrades, so it can compete with other manufacturers’ models in the same price range. These upgrades include a quiet shutter release model, less in-camera dust and four image area formats: DX as well as a 1.2x crop option. The older D3 and the D3S may have the same resolution (12 million pixels), but the D3S’s advanced sensor provides greater ISO performance: a standard range of ISO 200–12,800, and then an expanded range to 102,400.

At best, the quiet mode only stifles the high-frequency clacking sound made by most shutter releases. It’s still too noisy for situations where the shutter would be a distraction. The DX format has its place for many digital photography assignments, but the 1.2X crop mode should pique the interest of action photographers, which is one of Nikon’s primary target markets for the D3S. That 1.2X crop mode creates an 8.4MP file, which is comparable to the magnification of Canon’s EOS 1-D series of cameras. Although the maximum frame rate of 9 fps (frames per second) is the same as the FX format, you’ll be able to record large/fine JPEGs in full-speed burst of approximately 105 frames, compared to 78.

The Nikon D3S is the company’s first professional DSLR with a D-Move mode. The resolution may be the same as the D90, the first Nikon DSLR that could shoot video, but the D3S has contrast-detection AF (auto-focus) during filming and supports a plug-in stereo microphone. As with many DSLR cameras that can shoot video, the D3S’s CMOS sensor was built for still photography, not video. Although quick panning is not a pleasing video shooting method on any DSLR or video camera, doing so will produce some unusual effects with the D3S. Again, that’s to be expected with a “non-video” sensor. Shoot video in a “normal” manner and you’ll discover that the Nikon D3S creates quite stable and acceptable video.


What excites digital photographers the most about the D3S’s video capabilities is that it can shoot video throughout the entire ISO sensitivity range, including the “High-Sensitivity” mode, to ISO 102,400. The HS mode is extremely useful when the light level is low, although the resulting video is much grainer. Despite that the Nikon D3S will still produce acceptable video that most hobbyist/family video equipment is incapable of duplicating.

Plus, it makes much more sense to start video capture with the PV button than the center button on the rear multi-controller. You’ll be able to shoot video in any of the PASM modes. Press the OK button before or during shooting and you’ll initiate real-time metering. Then, as you would with still digital photos, you can use the shutter and/or aperture settings to control the video brightness. Change the aperture during shooting and you’ll increase or decrease the depth of field, without the need to pre-set the lens to a chosen aperture. A downside of this feature is that an aperture adjustment creates enough noise to be captured with the built-in microphone.