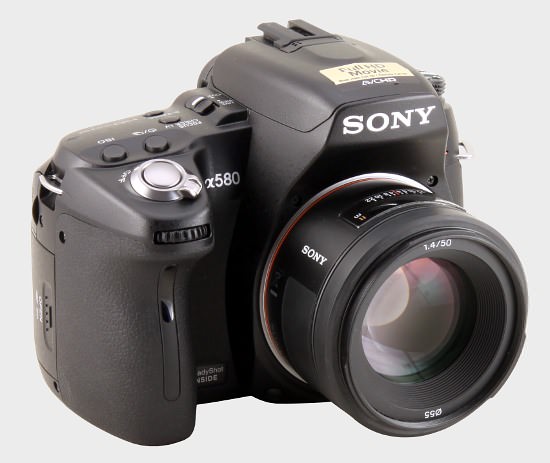 One of the most exciting digital photography innovations that most people take for granted is that so many of the cameras, compact and DSLR, shoot still pictures and video. The Sony Alpha DSLR A-580 camera has these dual capabilities similar to Sony A58, which produce excellent image quality to make it competitive with all other mid-level DSLR cameras. Part 1 of this PhotographyTalk.com article provides a general review of this Sony model, while Part 2 looks closer at its video system.

The Part 1 review explained that the A-580 is a conventional DSLR camera compared to its sister model, Sony’s SLT-A55, which has a translucent mirror design and full-time live view. As a conventional DSLR, the A-580’s mirror must flip open prior to beginning video recording. The SLT-A55 has no mirror, so its phase-detect AF (auto-focus) sensor can be active during shooting. With the A-580, you can’t focus in either phase-detect or contrast-detect live view AF mode, while you’re recording video. This difference may not be much of a factor, however. Yes, you’ll have to pre-focus or manual focus with the A-580, but they may be a better-than-average tradeoff to the disturbing image jumps and focus-motor noise of the A55, when using AF in video mode.

Despite that quirky Sony design concept, it’s the excellent video quality and how you achieve it that makes shooting video with the DSLR-A580 such an enjoyable experience. First, you can capture high quality HD 1080i video in AVCHD format, which looks stunning on an HD TV. The other shooting option is MPEG-4 format at 1440 x 1080 pixels; it’s less efficient, but easier to share with family and friends. MP4 video may have less pixel count, but, on the Sony DSLR-A580, it is recorded in 16:9 aspect ratio. Then, during playback, it’s interpolated to as much as 1920 x 1080, so the image isn’t stretched or condensed.

The longest video clip you can record on the DSLR-A580 is 29 minutes. That’s reduced to 14 minutes when using SteadyShot. The ambient temperature of your shooting environment also affects that clip length. Another important detail is the file sizes you can record. The memory card file system limits MP4 video to 2 GB. This is not an issue when shooting in AVCHD, since it can place video segments in separate files.

Another advantage of the A580’s video capabilities is the hinged screen. You can shoot at waist-level when you flip the screen up and hold the camera lower. In combination with the SteadyShot feature, you’ll discover that this is a much better stance for shooting smooth video, even when panning the camera.

Remembering that the Sony Alpha DSLR-A580 is a mid-level camera (approximately $800, body only), it isn’t surprising that there are a few small negatives that you must consider before buying this camera. They have less to do with whether this camera is worth the price (which it is) and more to do with whether these criticisms will be obstacles to the specific kind of video you want to shoot. For the vast majority of digital photographers, they are almost immaterial, but still worth knowing.

No manual control of shutter speed and aperture.
A minimal number (three) of movie options: recording format, recording size and deactivation of audio recording.
No capability to preview video framing before recording. When switching from the 3:2 ratio of still photography to the 16:9 ratio of video, black bars appear across the top and bottom of the screen. It takes some practice to adjust to this system, so you can make sure the bars don’t cover your subject.
Limited depth-of-field effects compared to a full-frame camera because of the APS-C sensor size. The upside is that the sensor creates a shallower depth of field that emulates professional moviemaking.
Some visible distortion occurs because the image is scanned one horizontal line at a time instead of a simultaneous scan of the entire image. You can overcome this problem by panning slower, plus this distortion in the A580 is not unusual, as it’s produced in all large-sensor cameras.