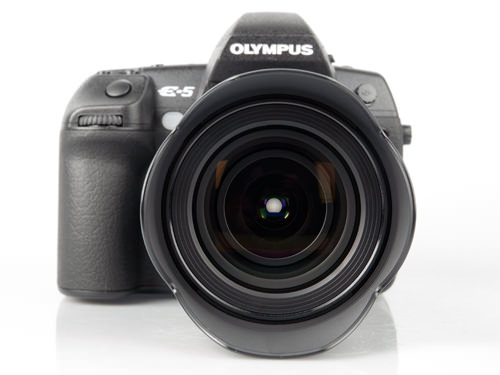 It’s easy to understand why many digital photographers and the experts may view the new Olympus E-5 DSLR as less than a true upgrade of its predecessor, the E-3. When introduced during 2007, the E-3 was a major step forward from the E-1, which was the world’s first Four Thirds camera (June 2003). Some of the improvements in the E-5 actually come from Olympus’ Micro Four Thirds line. It’s a bit unusual for features to gravitate from a “lesser” camera to one like the E-5, but the purpose of that is to compete with the Nikon D300s and Canon EOS 7D.

As with most complex digital cameras, however, you must investigate them very closely to determine their true value. When you put the E-5 under the microscope, it becomes much clearer that what Olympus has done with the E-5 benefits digital photographers. Most of the issues photographers have had with the E-3 have been resolved in the E-5; and, of even greater benefit is the image quality of the E-5; it is the best Olympus has ever offered in a DSLR. That image quality is a result of marrying the Olympus Zuiko Digital lenses and the E-5’s new 12PM sensor and processor (TruPic V+).

Although Olympus wants to compete with the similar Nikon and Canon models, it has targeted dedicated Olympus camera owners as the primary group to buy the E-5. Olympus claims that it now has a DSLR camera with an image quality that maximizes all of what its Zuiko lenses offer. Olympus has invested so much time and money into Zuiko and built so much brand loyalty that it only made sense to give its customers the best matching camera/lens combination it could.

You won’t see much of a physical difference in a side-by-side comparison of the E-5 and E-3. Some buttons have been reshuffled, but, more significantly, a more functional SD-version card slot has replaced the xD slot. As mentioned above, it’s the image quality of the E-5 that is Olympus’ primary hot button. A key feature of the new sensor is a revamped Low Pass Filter, resulting in the processor removing moiré patterns. Since the E-5 seems to be marketed to current or previous Olympus Four Third camera owners, the following list of changes to the E-5 should prove helpful.

Another major milestone of the E-5 is that it is the first high-end E-series camera to include a video mode. That 720p movie mode (1280x720) shoots at 30 frames per second in the motion-JPEG file format. It also records smaller file sizes in SD video (640x480). While you’re actually shooting video, you have no manual control of exposure, but that’s easily facilitated with a manual pre-focus. A potential competitive advantage is that you can activate contrast-detection AF (auto-focus) when recording. A negative is that you can’t edit your video in-camera.

In the final judgment of many experts, the Olympus E-5 probably won’t convince too many Canon, Nikon, Pentax or Sony owners to make a change. Neither will Olympus compel many first-time DSLR camera buyers to choose the E-5 over its competitors. The good news is mostly for Olympus E-3 owners that love the Four Thirds series and want more of the same. For them (or you, if you’re one of them), upgrading to the E-5 is a smart choice, even at a price point of approximately $1,700, body only.