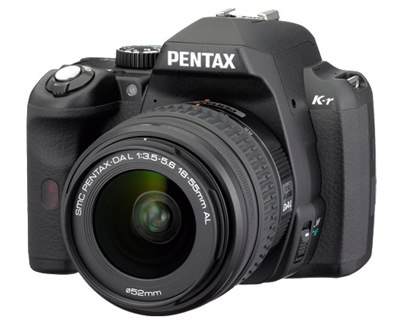 Pentax, like most camera manufacturers, is always looking to fill specific niches within its product line to appeal to what the company perceives as a hot buying audience. That is the purpose of the Pentax K-r DSLR camera, which fills the space between the entry-level K-x and the enthusiast models, K-7 and K-5. Another characteristic that the K-r shares with many other DSLRs at various price points is that it looks like the lower-priced model in its line (the K-x, in this case), but has more and better features and capabilities.

The notable improvements to be found on the Pentax K-r include:
You can see the active focus point in the viewfinder when the shutter button is half-pressed.
Output and menus are viewable on a 3.0-inch LCD screen, with 921K pixels resolution, which is the same as Pentax’s semi-pro models.
The second widest ISO range (100–25,600 in extended mode). K-5 has the widest.
The second fastest continuous shooting (6.0 frames-per-second [fps]) of all current Pentax DSLRs.
An IR-simple interface (wireless data transfer to compatible devices).
A cross-processing mode.
A Night Scene HDR mode.
Powered by either AA batteries or a proprietary rechargeable battery. (Rechargeable battery is standard; AA batteries require optional adapter.)

It’s fair to say that the Pentax K-r has strong specifications, which makes it a worthy alternative to similar models from other manufacturers.

Continuous Frame Rate: If a digital photographer likes to shoot fast action or multiple frames quickly to ensure a great image has been captured, then the continuous-shooting mode of the Pentax K-r outperforms all other cameras in its class, except for the Sony SLT-A33, at 7 fps. The K-r doesn’t just have a high frame rate, but also includes a large buffer that can accommodate that rate for 29 frames in JPEG mode. The camera also continues to shoot at an adequate frame rate, in JPEG mode, when the buffer is filled with images. This capability alone makes the Pentax K-r an excellent DSLR one step beyond entry-level cameras.

Auto-Focus Speed: The K-r leaps ahead of the K-x with an AF system that allows you to know which of the AF points is active. There is also more space between the points. The system has 11 AF points, with 9 that are cross-type. You also have a number of options: manual and automatic AF-point selection as well as active AF-points of 1, 5 or 11. Because of the “screw-drive” connection mechanism of the Pentax 18–55mm kit lens (which is typically bundled with the K-r), AF performance may seem a bit slower and produce more noise than similar cameras. An alternative lens choice that provides faster AF performance is the Pentax line of SDM lenses, although they are more expensive.

Image Stabilization: Pentax puts image stabilization in the camera body instead of its lenses. Although Pentax claims the K-r’s IS system will give photographers a four-stop advantage, third-party testing has found that its more like one to two stops. Another positive is that the camera’s anti-shake capability works well at very slow shutter speeds, making it possible to capture sharper images in low light.

Video: At its price point, it’s probably not surprising that Pentax didn’t upgrade the K-r’s video capabilities compared to the older K-x model. The K-r’s maximum resolution is 1280 x 720 pixels (720p) at 25 frames per second. A number of its competitors offer 1080p. Many of the K-r’s video features are limited (manual controls) or non-existent (no auto-focus while shooting, no connector for an external stereo microphone, no wind-cut function and no continuous or single AF during recording). These negatives are offset by the K-r’s larger sensor and high quality Motion JPEG-format files.

Priced at approximately $550 to $650, with a PENTAX-DA L 18–55mm AL lens, the Pentax K-r DSLR camera could be the right choice for many digital photography hobbyists and enthusiasts that want something more than an entry-level DSLR, but are not prepared to pay thousands of dollars for semi-pro or professional-level equipment.