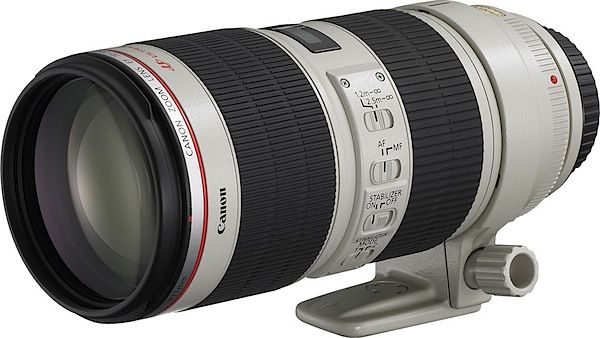 With the Canon EF 70–200mm f/2.8 L IS II USM zoom lens, the company has done a magnificent job (with very few exceptions) of improving most of the features and capabilities (optics, auto-focus, image stabilization and design) of the lens’ predecessor. Since sensor pixel counts have increased significantly from 2001, Canon decided that this popular lens deserved to be upgraded to match the demands of today’s photographers for greater optical quality.

Starting with its physical features, the new Canon EF 70–200mm doesn’t try to re-invent the wheel, as it has the same solid, metal-bodied and dust- and water-sealed design as its predecessor. The only noticeable changes are a bit wider focus ring and a locking button on the lens hood. Critics will point to the tripod mount ring as a problem. The lens must first be detached from the camera before the lens can be disconnected from the ring. Plus, photographers that shoot portraits will discover the lack of alignment marks.

Optical performance is truly spectacular, whether the lens is matched with either APS-C or full-frame bodies. Much of that performance can be traced to the 70–200mm’s intricate composition of 23 elements in 19 groups. Canon built even more optical quality into the lens with five ultra-low dispersion (UD) glass elements. One is even made from fluorite, to reduce chromatic aberration to a minimum. You can expect better magnification, since the shortest focus distance is smaller. Photographers who shoot with the newer fast, high-resolution Canon DSLRs, such as the EOS-1D Mark IV, will also discover an auto-focus system that matches those cameras’ modern specs.

Other optical characteristics that make this Canon lens a winner include an extraordinary sharp image, even at f/2.8, and distortion and vignetting levels you would expect (and demand) in a lens at this high price point. Surprisingly, with all these optical improvements, the “bokeh,” or those areas of an image not in focus, is not as good as it could be. Image quality also seems to suffer when shooting at close focus distances.

Canon claims four stops of stabilization in the new 70–200mm’s IS system; and it appears they’ve delivered, making it possible to capture sharp pictures hand held at slow shutter speeds.

Cons
Relatively harsh rendition of image areas not in focus.
Somewhat susceptible to flare with direct light sources in or close to the frame.
Inconvenient design of tripod mount ring (can't be detached without removing the lens from the camera).

If asked to make a choice of either Canon’s EF 70–200mm f/2.8 L IS II USM zoom lens or Nikon’s equivalent, then the Canon offers just a bit more; you could say they are 1A and 1B. Part of what puts the Canon 70–200mm ahead by a nose at the finish line is that the company was able to improve a lens that was already considered one of the best. You’ll pay the price to join Canon in the winner’s circle, however, since the 70–200mm is approximately $2,000 to $2,500. That means it is probably a lens for semi-pros and pros that can generate good income from their investment. Hobbyists and enthusiasts must be both very serious about their photography and have deep pockets to justify the price.