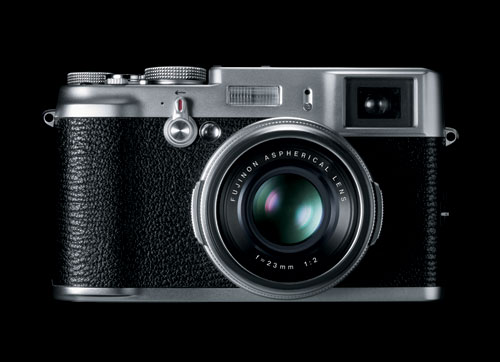 At first glance, the Fujifilm FinePix X100 camera looks like it just time-traveled from the days of classic rangefinder film cameras. That retro-look is one of its most charming features, and is complemented by traditional analogue control dials for shutter speed, aperture and exposure. Some may think little of the FinePix X100 when they discover it is a compact camera, but its quirky design is just another example of the unique market niche that Fujifilm has been carving for itself for many years. The truth is the FinePix X100 is a camera serious enthusiasts and professionals will appreciate and enjoy once they investigate it closely.

What may surprise them immediately is the FinePix X100 primary feature: the combination of a standard direct-vision optical viewfinder and high-resolution electronic viewfinder. Then, photographers’ eyes will open a bit wider when they see the camera’s large APS-C sensor, a fast f/2.0 lens that is semi-wide-angle and has a 35mm-equivalent field of view, and an electronically coupled (“focus-by-wire”) manual focus ring. Other manufacturers have brought large-sensor, fixed-lens compacts to the market, but with average to below-average results. The FinePix X100 also has a number of noticeable flaws that will prove to be significant obstacles for many photographers, but those who join Fujifilm in its unique niche will chose this camera for its exceptional image quality.

Before exploring the FinePix X100’s challenges, its upside (including those noted above) deserves to be revealed first.

Despite its classic look, hybrid viewfinder and excellent image quality, which many people don’t expect to find, the FinePix X100 also suffers from problems that shouldn’t appear in a camera of this type.

At the top of the list is that you can’t adjust ISO, EVF/OVF switchover and AF point during card writing. This problem is compounded by the fact a RAW file requires as much as seven seconds to write; and that’s with a Class-10 SDHC card, which is relatively fast. The work-around here is to use the newer USH-I cards.

The second item on this camera’s oops list makes no sense at all: You must separately set the ISO and dynamic range positions for each exposure mode. Switch between modes and the second mode’s previously selected value will return, which could have you shooting pictures in different lighting with the wrong setting.

Additional flaws of the FinePix X100

There’s the rub: the Fujifilm FinePix X100 camera looks the part, feels the part and even shoots the part, of a camera that produces exceptional photos. It has so many problems, however, that, at approximately $1,200, its best audience is people who like to use a camera as easily as possible, which was the attraction of the classic rangefinder camera. It’s difficult to dismiss entirely a camera that produces images as good as most DSLRs, but to buy this camera is to love it unconditionally and learn to live with its idiosyncrasies.