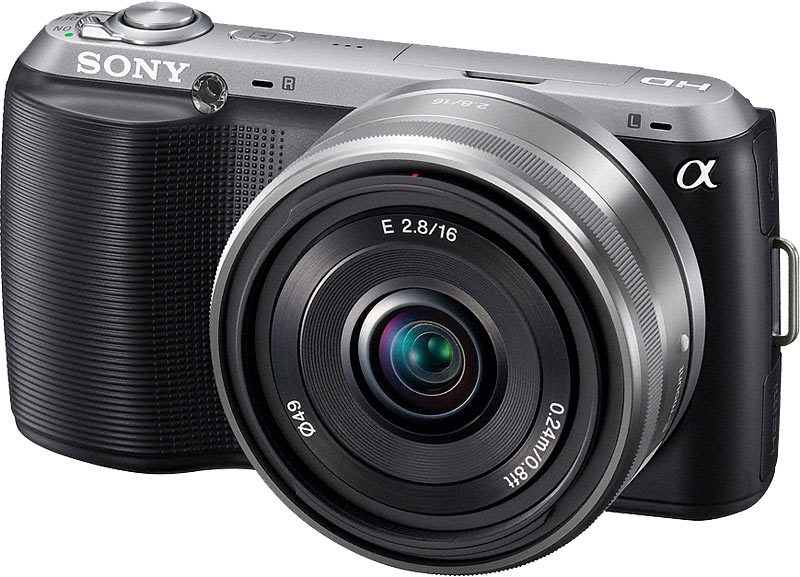 The Sony NEX-C3 mirror-less camera is clearly aimed at those beginning photographers that are ready to move from a point-and-shoot to an equally small and easy-to-shoot camera, but with more “big-boy” features and capabilities. Foremost of which are the APS-C capabilities of its hefty 16MP sensor, interchangeable lens and more creative control with various picture effects. Sony is favorably situated to benefit from the popularity of mirror-less cameras. It’s now able to manufacture cameras like the NEX-C3 that represent the mixture of what Sony learned about standard DSLR cameras when it dabbled in that market niche and about interchangeable lens, with its purchase of Konica Minolta during 2006.

That interesting hybridization allows the C3 to compete with the smallest Micro Four Thirds models in body compactness, given that the zoom lens will make the camera slightly bigger and heavier. No doubt, most photographers that are ready to upgrade will exchange a bit more size (with the zoom lens) compared to their old point-and-shoots for the NEX-C3’s large sensor. It is not the exact same sensor that made the Sony A55 such a star, but the re-designed sensor improves power consumption and produces less image noise.

As a representative of the next generation of mirror-less cameras from Sony, the NEX-C3 is actually smaller than the earlier models, the NEX-3 and NEX-5. This is quite a feat since those cameras are already compact. The NEX-C3 is certainly emulating the style of point-and-shoots, but those upgrading to their second camera are already comfortable with the point-and-shoot’s feel and little weight. Sony’s target audience for this camera is still not ready (and some of that audience may never be) to carry a bulky, heavier DSLR and its lenses. They want significantly better picture quality and more control of the camera without the need to learn all of the technical details of digital photography.

Most purchasers of the NEX-C3 will probably prefer the 18–55 zoom lens to the 16mm f/2.8 lens, which is also available bundled with the camera. The 18–55 is the equivalent zoom range to a 5–15mm lens on a standard compact. The bigger zoom lens is part of the trade-off for the DSLR-size sensor. Larger sensors require longer focal lengths for any chosen field-of-view. Even with the bigger zoom lens, it would be difficult to find a “compact” camera with such a lens and an APS-C-sized sensor.

One of the features that will attract many photographers ready to upgrade is the NEX-C3’s Photo Creativity mode. This automates the control of picture-taking results even more than Sony’s “Bkground Defocus” mode found on the first-generation NEX models. Many of the NEX-C3’s shooting settings can be adjusted without having to fill your head with all those technical details, such as f/stops, white balance and exposure compensation. Photo Creativity has seven settings or options: Bkground Defocus (aperture), Brightness (exposure compensation), Color (white balance), Vividness (saturation), Self-timer/Continuous Advance, Soft Skin Effect and Picture Effect. This seventh option includes a series of seven image-processing effects, which can be used in combination with the other options.

The Photo Creativity mode of the Sony NEX-C3 camera will provide beginner photographers with that additional control they want, automatically, in a next-level camera. The mode is easy to understand and use, and all those combinations make for great flexibility. There are flaws in this mode, however, such as you may be forced to shoot at 18mm, f/3.5 in Bkground Defocus. This creates a softer background than shooting at 55mm, f/5.6 with the kit lens. The Bkground Defocus option will also recommend shooting at f/22–32 for sharper images, but at those narrow apertures, it’s only possible in the brightest of light. A more frustrating flaw for many photographers is that they will have to shoot at ISO 1600 in iAuto mode. This will limit the advantages of having the large sensor.

For those beginner photographers itching to upgrade to a camera with more “oomph” than their first point-and-shoots, the Sony NEX-C3 is a worthy choice. At $550 to $650, depending on what lens is in the bundle, this camera offers the right combination of point-and-shoot design and ease-of-use with a number of features (sensor and interchangeable lens, for example) that come closer to DSLR’s.