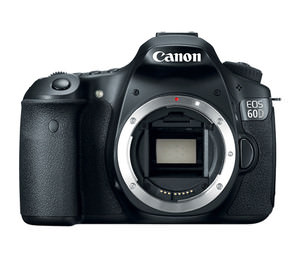 The Canon EOS 60D serves to broaden Canon’s range of advanced digital SLRs like the Canon 90D EOS camera. It is a step up from the digital rebel line—but it doesn’t really move toward “semi-professional” camera that many of the cameras in the 30D, 40D, or 50D lineup were intended to be on release. The EOS 60D has some key features that make it attractive for more advanced photographers, but it lacks the versatility of the more expensive and more advanced EOS 7D.

There were 317 real customer reviews of the Canon EOS 60D all giving it 4-5 star rating if you would like to read these reviews you can do so here.

Many people just look at sensor size when purchasing a camera—for them all the allure of the 60D might be lost. Why purchase a camera that has an identical sensor size and pixel density as both the Rebel T2i and the EOS 7D? The real question needs to be: What does the 60D have that the T2i lacks and is the 60D better all-around performer? Similarly, it is helpful to understand what advantages the 7D has over the 60D.

In general, the Canon EOS 60D is a good camera to buy if you want an EOS 7D, but you just can’t afford it. The Canon EOS 7D is a good purchase if you need a camera that will stand up to punishment. It has a stronger magnesium alloy body that will really take a beating. It also has duel digic-4 processors that increase maximum frames-per-second and 19 cross-type AF points for even faster focusing and subject tracking. It is the camera you should invest in if you are a working professional who needs a second body to complement a full-frame digital camera like the 1D. In the end, the differences between the 60D and 7D are small, and action shooters are going to be the only people who notice most of them.

In the hands of a good photographer, the 60D can be a quality action shooter—better than the Rebel T2i—because the 60D includes 9 cross-type AF points which perform well tracking fast moving subjects. The 60D simply lacks the top-end speed of the 7D.

Overall, you might be better off looking at options in the Rebel lineup if you are on a strict budget or you can’t justify spending more money for an occasional use camera. The T2i/550D performs well if you just need it to shoot still subjects.

It’s clear that the 60D fits right into the Canon lineup. Let’s take a more detailed look at the 60D’s features to see if it is the right camera for you.

An 18 megapixel APS-C CMOS image sensor rests at the heart of the 60D. It is a good improvement over the older 50D sensor, with a size of 15.1 megapixels. It is identical to the sensor offered in the T2i and the 7D and offers maximum image dimensions of 5,184x3,456 pixels in both JPEG and RAW shooting modes. Note that APS-C sensors have a field of view crop factor of 1.6x lens focal length—this means that the focal length of every lens you use on the 60D will be multiplied by 1.6x. It is similar to using a lens magnifier or extender to increase the reach of a lens.

For processing power, Canon used the DIGIC 4 Image Processor. While it is the same processor as the 50D, but it does not provide the same performance. Because of increased sensor revolution and technology, the DIGIC 4 processor can only allow the 60D to shoot at 5.3 frames-per-second. To achieve faster fire rates, the EOS 7D uses dual DIGIC 4 processors. 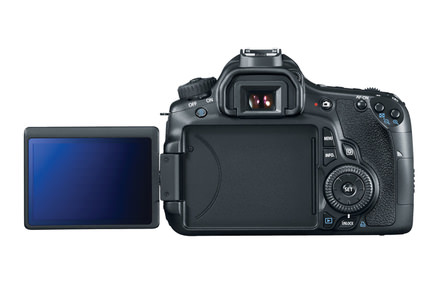 The EOS 60D has the same articulated screen that appears on the Rebel T2i/550D. It has a 3:2 aspect ratio which is ideal for viewing 1080p HD video and its ability to tilt and swivel makes for some interesting and creative uses. Instead of holding the camera right in front of you to shoot video, you can move it to more comfortable positions or find a more creative angle to capture video from. The screen is not very useful while shooting still photography as live-view performance is quite limited in the 60D—like many digital SLRs live-view is just not good.

A rear control dial located on the back of the camera and identical to the one seen on high-end Canon releases helps navigate menus and control exposure settings while shooting. Instead of the joystick found on the 7D, 5D models and 1D, the 60D has a multi-way button inside the control dial and a “set” button. The rebel lacks the control dial—which has become a staple for many Canon photographers.

Battery life is improved over the Rebel T2i, a LP-E6 Lithium-Ion Battery—the same battery found in the 5d Mark II and 7D allows photographers to get more exposures out of a single battery life than the Rebel series cameras.

The 60D is compatible with SD/SDHC/SDXC cards, a change over the 50D which worked with Compact Flash cards. Canon made this change for digital Rebel users looking to move up to a more full-featured camera. The entire Rebel lineup uses SD cards.

It is no surprise that the 60D offers excellent image quality—it shares a sensor that led the EOS 7D and T2i/550D to the top of their respective market segments in image quality. Images show good detail and color reproduction. Much of the story behind image quality is told through the lens you use to get light to the image sensor. The 60D really shines when coupled with some of Canon’s more expensive professional lenses, but it can also get good images with cheaper primes—like the 50mm f1.8.

An EF-S mount means that you can couple this camera with any lens designed for SLRs in Canons lineup. It’s a great feature for photographers who prefer “L series” glass or full-frame lenses. High quality glass designed for EF mounts and full frame sensors help improve image quality with the 60D immediately and provide upgrade options for the future.

The Canon 60D has a bit of an edge in image quality when compared to its direct rival from Nikon, the 7000D. While it might not be enough to turn any Nikon users away from a considerable lens investment, the 60D produces sharper images with finer details at ISO 800 and above. This is most apparent in images with fine patterns.

ISO settings and ISO performance are pretty standard compared to most recent camera releases. Detail and resolution is ideal at lower ISO ratings, but even at 6400 or 12800 images are still useable for most every application. At ISO 6400 and 12800 you do not see any of the patterned banding noise that plagues most digital SLRs operating at high ISO speeds. Performance in ISO noise is comparable to both the 7D and the T2i.

Autofocus system: While it has the same 9-point AF system that appeared on the 40D and 50D, Canon removed the 60D’s ability to fine tune autofocus. While the autofocus system is fast and impeccably accurate, not having the ability to fine tune autofocus through the camera might cause some difficulties for landscape shooters or those who shoot in difficult lighting conditions. Focus in live view mode is almost completely worthless. It takes 3-4 seconds for the camera to focus while using the LCD screen to shoot images. This is a problem for most digital SLRs and you really need to turn to a mirrorless camera to get over it. In the case of the 60D, slow live view mode focusing makes the articulated LCD almost completely useless for still shooting.

The 60D also has peripheral illumination correction to eliminate any vignetting that may occur while it shoots still images. It also has the ability to reduce image distortion caused by undesirable lens effects. Chromatic aberration correction effectively removes unwanted color fringing in images and distortion correction does a good job removing barrel distortion—even when using lenses that have wide focal lengths. While both of these features effectively reduce chromatic aberration and distortion, they sacrifice some detail and sharpness. After they are applied, images appear slightly softer. 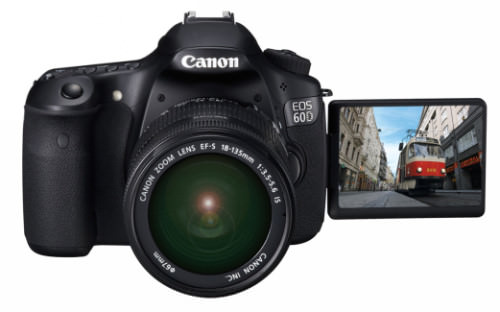 While shooting video, the Canon 60D allows for program automatic and manual exposure control. You cannot shoot video on the 60D using aperture priority or shutter priority modes. While using manual exposure mode, it is possible to adjust shutter speed, aperture, and ISO sensitivity before you begin recording. After pressing the movie record button, settings cannot be changed. While shooting video in program exposure mode the 60D locks metering to center-weighted and if face detection is enabled, the 60D uses evaluative metering.

Like the Rebel T2i, the 60D can use autofocus during video shooting. Autofocus function has to be manually triggered by a ½ press of the shutter release button, so it is not as useful as continuous autofocus. There are a few problems with this method. While autofocus performance is upgraded through the use of contrast detection AF points, the 60D still searches for focus briefly before achieving a crystal clear image. This “search” is present in videos if focus is adjusted. Additionally, the audible hum of the autofocus motor is apparent on playback, as it is captured by internal microphone.

The Canon EOS 60D is a sensible upgrade from the 50D. The addition of an HD video mode and tilt/swivel LCD screen are the most valuable assets that improve the 60D’s usefulness and performance. Going to an SD card format for storage also has advantages for users who want to upgrade from the digital Rebel but don’t want to spend extra money on new accessories.

Sensor size similarity is making new Canon digital SLRs harder and harder to differentiate between. Most of Canon’s APS-C camera lineup shares the same 18 megapixel sensor. Functionality and features determine the camera prices and usability in this range. It won’t be long before image sensor size stops being one of the factors that determine digital SLR worth. In this case, Canon’s APS-C camera lineup has moved back to the film era where film made the imaging qualities of most cameras identical and features became primary selling points over image quality. It is a simple sign that as digital cameras advance, sensor size will matter less.