The Canon EOS 6D DSLR Camera: A Bold Bet in a High-Stakes Game 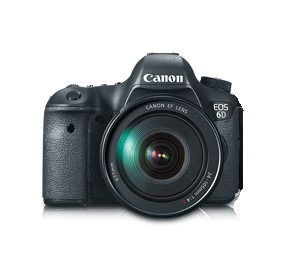 It’s no surprise that major photography equipment manufacturers, especially camera makers, target events like Photokina as the premier stage to introduce new products to the global photography audience. Photokina 2012, however, prove to be the grandest coming-out party of recent memory, as Nikon unveiled the full-frame D600 and Sony the full-frame a99. Canon wasn’t about to let its major competitors grab all of the spotlight and headlines, so Photokina 2012 was also where the world witnessed the official launch of the new full-frame Canon 6D DSLR.

Without mixing metaphors too severely, Photokina quickly transformed from a star-studded stage of ingénues to a serious high-stakes poker game, as the Big Three manufacturers had to stop smiling at each other (as only competing ingénues can) and begin the long-term fight to win the hearts and minds of future camera buyers. The Nikon D600 and the new Canon 6D are definitely sitting across the table from each other behind large stacks of chips. At almost twice the price, the Sony a99 is sitting at a different table, so the pot of customers in the middle of the table is just a two-camera confrontation.

PhotographyTalk has already presented an extensive preview of the Nikon D600 in the article, “Why the Nikon D600 Full-Frame DSLR is Exciting News for Serious Enthusiasts.” Now, it’s the Canon EOS 6D’s turn, which includes an interesting side-by-side comparison in the chart below.

Canon places the new EOS 6D between the EOS 7D and the EOS 5D Mark II in its DSLR series; however, the newer 5D Mark III is actually the next rung on the ladder. The Canon 5D Mark II is a three-year veteran of the marketplace, so a number of its features and capabilities are falling behind newer models. Canon aficionados are more likely to see a clearer family resemblance to the APS-C EOS 60D, with its body style, controls and other features and capabilities updated to full-frame status.

Canon has given the 6D some of the 5D Mark III’s functionality with its silent shutter mode, in-camera HDR and multiple exposure modes, although as JPEGs only. Pay approximately $1,500 more for the 5D Mark III and you’ll have the flexibility of producing RAW files with these features.

Curiously, the new EOS 6D doesn’t include some features found on the new EOS Rebel T4i, such as an on-chip phase-detection to support autofocus in live view or movie mode, a touchscreen interface or an articulated LCD screen. Canon may be thinking that these touches are important to the entry-level DSLR buyer who is advancing from a compact, but are considered “frippery” by serious photographers in the market for a full-frame DSLR.

The Canon EOS 6D is a well-built instrument with its magnesium alloy shell, but Canon had to compromise a bit by making the top plate from plastic to accommodate the operation of the GPS and Wi-Fi. During the announcement of the new full-frame, Canon seems to indicate that the 6D’s construction is such as to keep dust from the insides as well as “splashes.” What that means isn’t quite so clear, at least, initially.

The first photographs of the camera show a substantial grip and, despite the 6D’s smaller footprint, it appears to fit the hand very well. Canon has accessorized the 6D with the new BG-E13 battery grip, with room for two LP-E6 or AA batteries. No reason to avoid the portrait orientation, as the battery grip has a second set of controls.

It may also take a bit of practice to “program” your finger movements to the primary controls when peering through the viewfinder. Your thumb must reach somewhat further to the multi-controller to reposition the focus point. You’re required to push the AF point selection button before you can move the AF point with the front and rear dials. Despite a slight reorientation of your thumb movements, the positions of the various controls and dials on the EOS 6D will remind Canon photographers of the layouts on most EOS models. Some re-configuration of the controls’ positions was necessary given the 6D’s smaller size, and price point. Instead of the joystick multi-controller most often seen on top-of-the-line EOS models, the 6D once again resembles the 60D with an 8-way controller within the rear dial. This results in another function that requires further reaching of your thumb, as the AF point selector is now lower on the back panel instead of under the natural placement of your thumb.

Canon was true to the type of viewfinder design that makes full-frame DSLRs a wonderful shooting device. For those photographers new to full-frames, the large, bright perspective from the 6D’s viewfinder will be a major “wow” moment. Another compromise is the lack of a superimposed grid or other patterns on the focusing screen, which only comes with Canon’s more expensive full-frame DSLRs. It does borrow the alternative from the 5D Mark III, which is a set of interchangeable focus screens, such as the Eg-D and Eg-S.

Engineering a smaller and lighter full-frame DSLR to appeal to a wider market does limit the configuration of the points in the AF system. The 6D has 11 points and only the central point is cross-type. On the EOS 6D, they must be placed within a smaller area at the center of the frame. Nonetheless, the 6D will shoot in low-light conditions better than the 5D Mark III, -3EV compared to -2EV, respectively. This greater low-light capability compensates quite a bit for the AF points limitations. Another nice AF functionality is precise adjustment of the AF, as found in the 5D Mark III.

At first flush, Canon’s 6D and Nikon’s D600 seem to be approaching the market for their cameras with slightly different strategies. Nikon appears to have given the D600 features and functionality that allow for serious creativity and virtually pro-level performance. These include a 24.3-MP CMOS sensor, a 39-point autofocus system that includes 9 cross-type and a pop-up flash and accessory shoe. The Canon ESO 6D doesn't have a built-in flash, so it can’t serve as a commander like the D600, which can control two groups of remote flashes across three channels.

Although the Canon EOS 6D is also packed with many capabilities that lend themselves to being more creative and achieving pro-like image quality; however, it leans towards the wishes of the mobile and socially conscious camera crowd more than the D600 by including a GPS and Wi-Fi capabilities, the first ever on a Canon DSLR. A better use of the 6D’s Wi-Fi for many photographers is that when used in combination with a smartphone that device operates as a wireless remote control. Simply upload Canon’s EOS Remote app and take control of live view and exposure with ether an iOS or Android phone. The Nikon D600 has no GPS and its Wi-Fi functionality requires the optional WU-1b Wireless Adapter. Although travel, nature and landscape photographers shooting with the D600 might like an onboard GPS, the consensus is that the more serious a photographer is about his or her photography, the less attractive GPS becomes.

Ultimately, the differences between the Canon EOS 6D and the Nikon D600 (which favor Nikon slightly) may not be that important to most photographers who might choose either of these new full-frame DSLRs. What might be an important difference for APS-C, cropped-sensor camera owners, who are ready for their first full-frame, is that Canon EF-S lenses are not compatible with the 6D, while Nikon’s AF-S lenses are compatible with the D600.

Of course, final judgment is still in the future, pending objective tests of Canon’s limited AF system and other features and capabilities; plus, the ultimate test: the marketplace.

The Canon EOS 6D Full-Frame DSLR camera can be pre-ordered from Amazon for $2,099.00