Top 10 Things to Photograph in Iceland 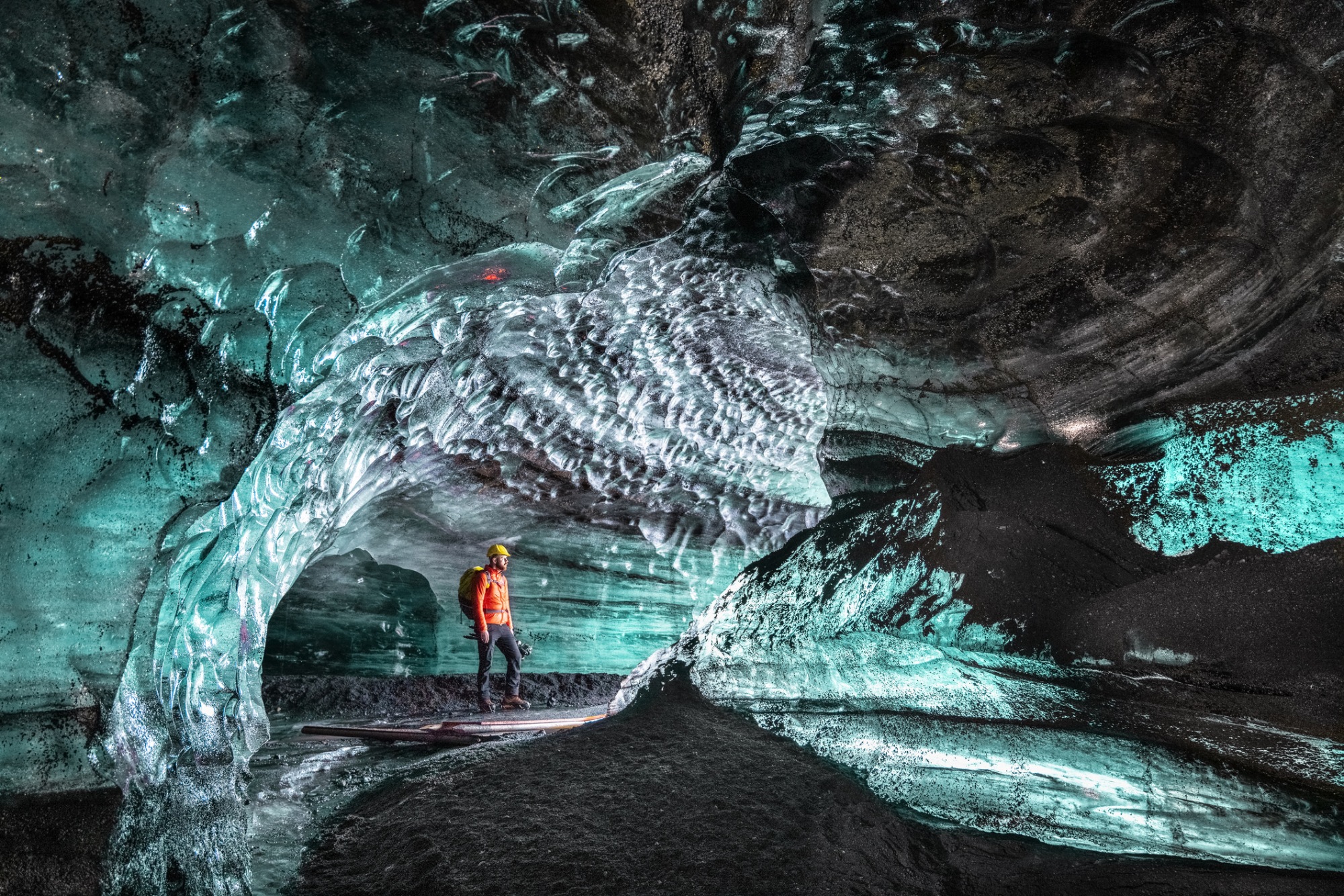 To be fair, there's thousands of things to photograph in Iceland. Perhaps even more!

It is a country whose size is not indicative of the breadth of its beauty. There seems to be something spectacular and otherworldly in every corner of this tiny island nation.

But, as these types of lists often require, I'm limited to just ten things to photograph in Iceland. See my picks below, in no particular order. 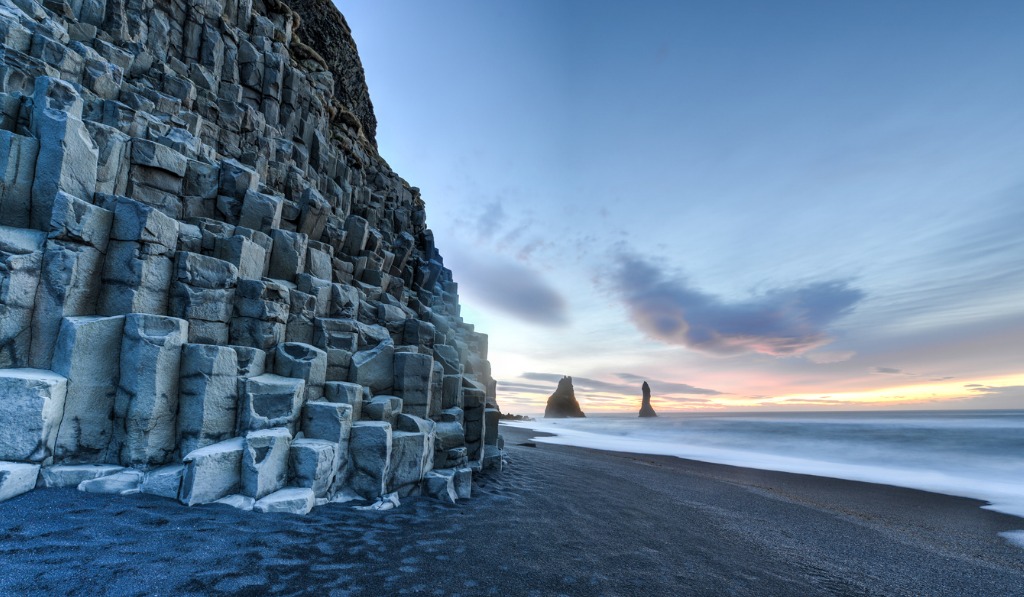 Photo by demerzel21 via iStock

Reynisfjara Beach has a couple of claims to fame...

First, it's a black sand beach, and perhaps the most famous beach in all of Iceland. The beach is located near the quaint village of Vik, which is worthy of a visit too.

Second, the beach is home to spectacular basalt columns. The columns look like huge stones that giants from a long-ago civilization placed along the shore.

Just be careful when you're visiting the beach to photograph the columns. This area is famous for big waves that sneak up on you, and at high tide, the columns might not even be accessible. Plan ahead, make sure you're there at low tide, and always have someone with you to keep watch for big waves coming ashore. 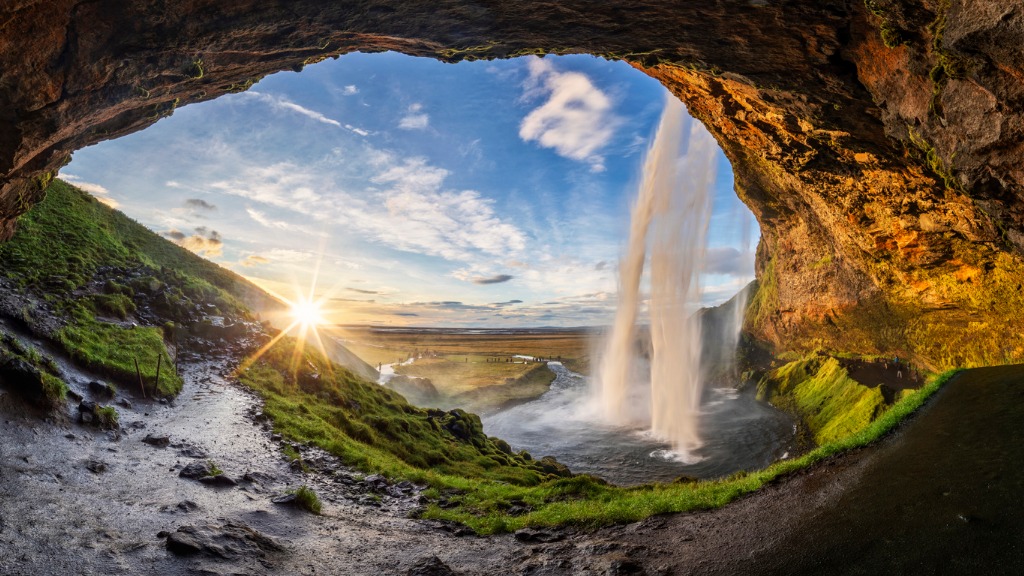 Photo by DieterMeyrl via iStock

Chances are if you Google "what to photograph in Iceland," Seljalandsfoss waterfall will be at the top of the list.

To say that this waterfall - which is located about 75 miles southeast of Reykjavik - is breathtaking is a major understatement. It is one of the best-known Iceland waterfalls.

The mist coming from the waterfall is robust, to say the least, so if you fancy a photo from behind the falls, be sure you have your rain gear on (and protection for your camera too). 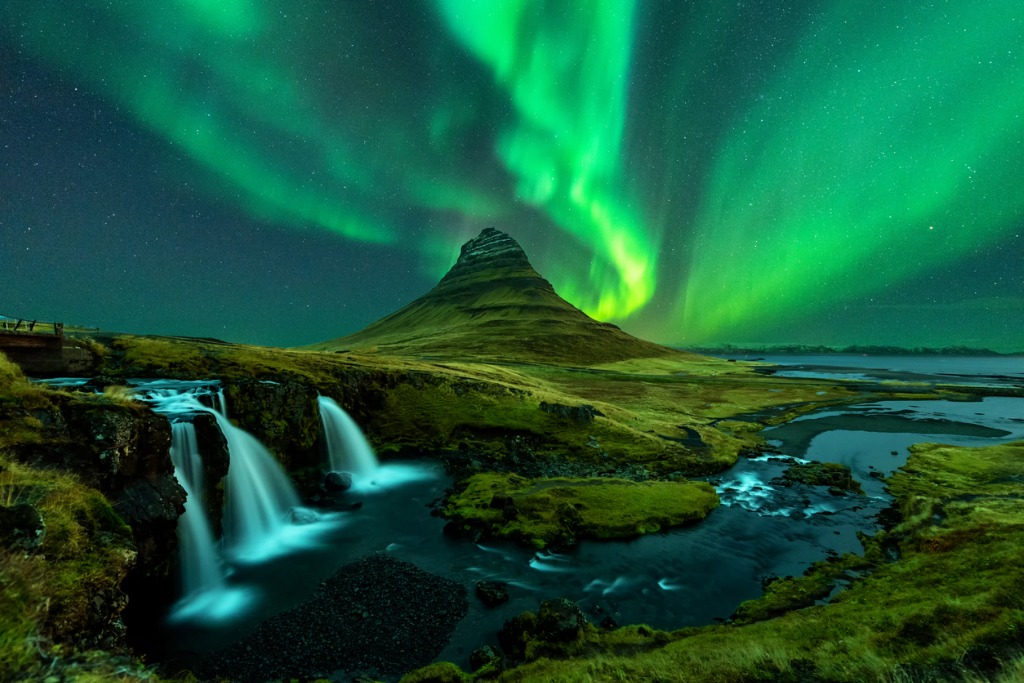 Photo by martinhosmart via iStock

As one of the top locations to photograph in Iceland, Kirkjufell is a major tourist spot. It's about two hours north of Reykjavik on the Snæfellsnes Peninsula.

This location has it all - a soaring mountain peak, the gorgeous Kirkjufellfoss waterfall, and the weathered Iceland landscape in between.

The mountain itself offers a strong, symmetrical subject to anchor the shot, and depending on when you visit, you might be able to capture the setting sun alongside the mountain. Sunrise is a nice time to visit as well, as the morning rays softly light the scene.

It's also a perfect place to photograph the northern lights!

Editor's Tip: When I head out for a long photography journey, I want a camera bag that's bulletproof and can accommodate a lot of gear. For that, I've got the Nomatic Check-In. This bag has a lightweight polycarbonate shell that'll stand up well to the rigors of airline travel. It has TSA locking zippers, low-profile handles that won't get caught in luggage systems, and it holds up to 78 liters of gear! 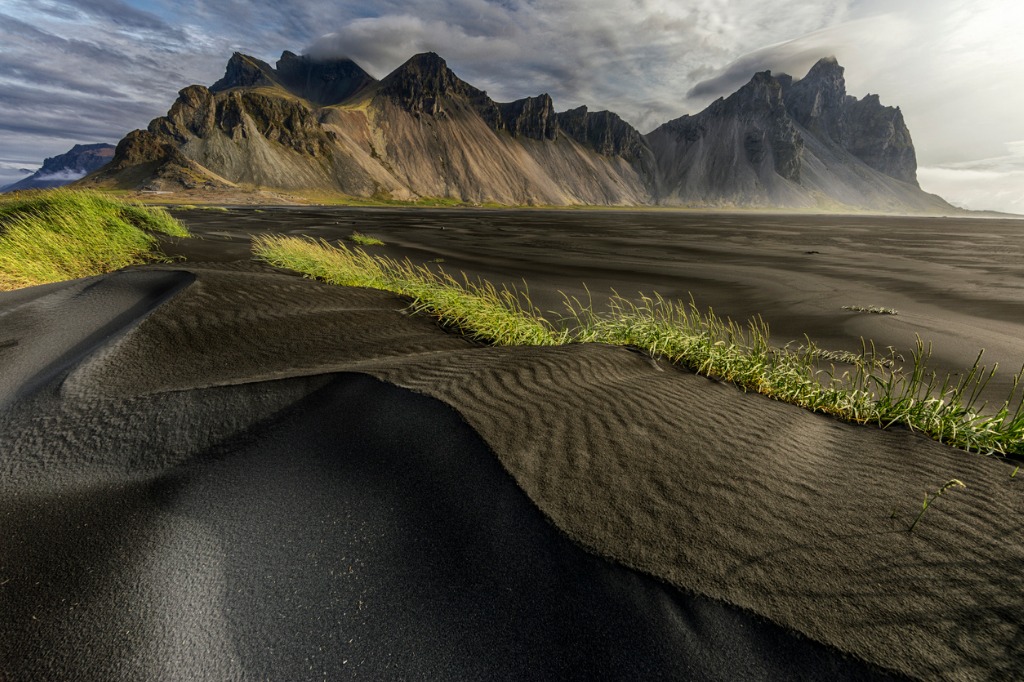 Photo by tunart via iStock

One of the most interesting mountain peaks in Iceland is Vesturhorn. It's also one of the most complicated Iceland photography hot-spots to find.

Located about 5 miles from the town of Höfn, the mountain is accessible via an unmarked gravel road. It's easy to miss, so pay attention! The struggle to get there is worth it, as you can see in the image above.

Adding to the visual appeal of this place is the tufts of green grass that arise out of the black sand. It truly looks like something from the set of a Star Wars movie! 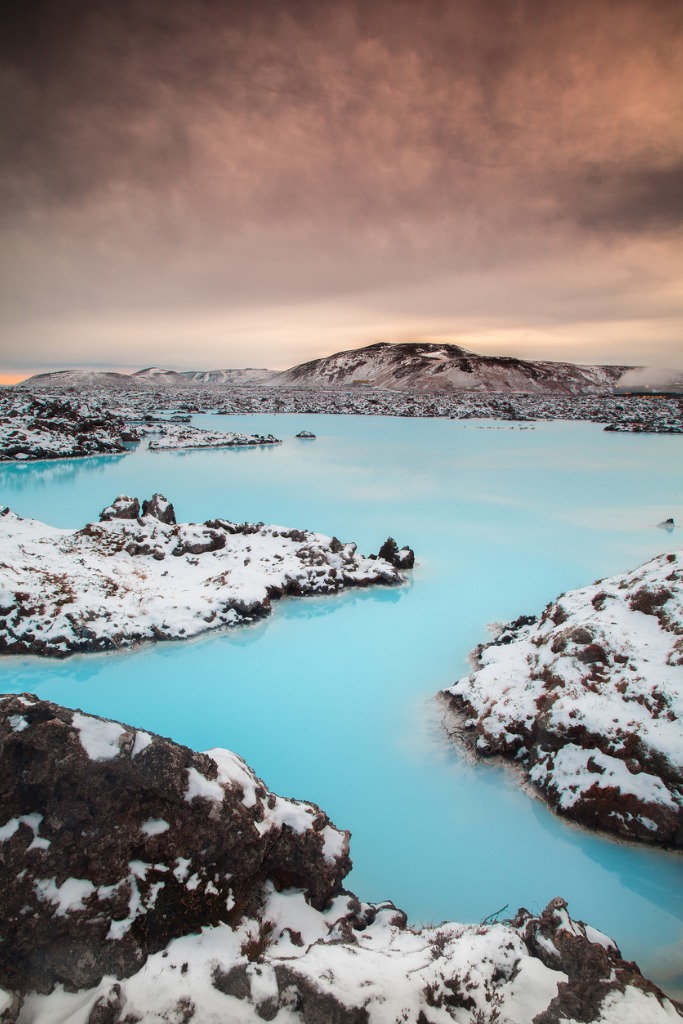 Photo by Damlow via iStock

Located near Reykjavik, the Blue Lagoon is another popular area for tourists.

The geothermal hot spring isn't just for soaking, though. The intense blue waters of the lagoon make it a great photo location in Iceland.

As many folks do, you can enter the lagoon and take a selfie as you bask in its warm waters. But, if you don't have time (or don't want to pay to get in), you can also photograph the lagoon from vantage points outside the facility.

The blue water and black lava rock make for a nice color contrast in your photos. 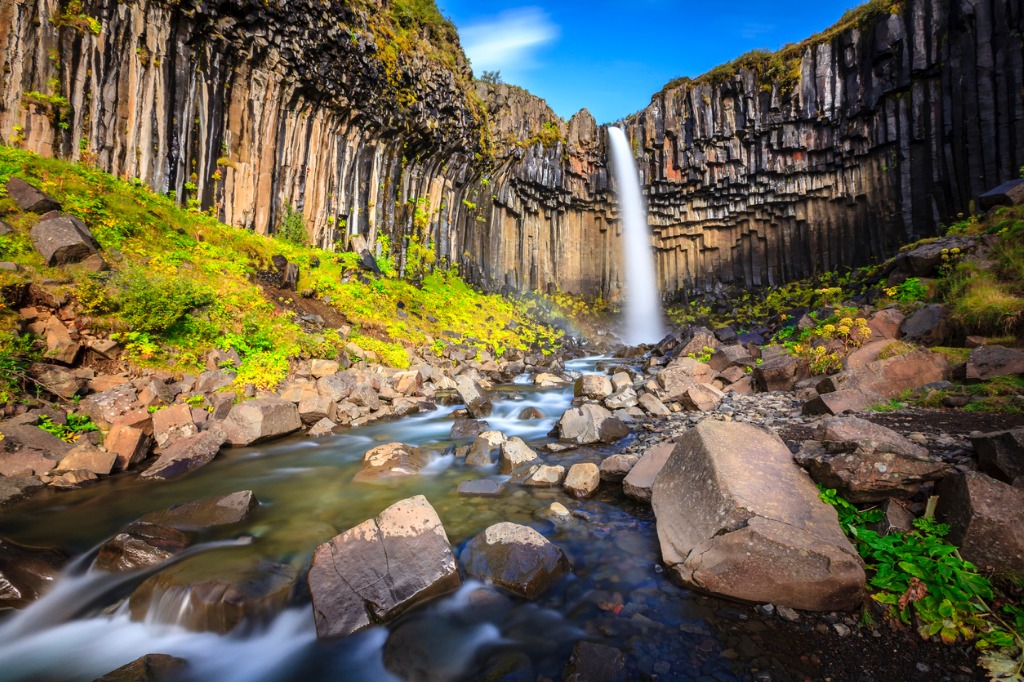 Photo by alexeys via iStock

Though Svartifoss might not be the best-known waterfall in Iceland, it is certainly worth a trip to see it.

Located in the massive Vatnajökull National Park on the island's eastern side, Svartifoss is surrounded by beautiful dark lava columns. In fact, these columns gave the falls its name - Svartifoss means "black falls."

The falls is an easy 30-minute hike from the park's visitor center. The walk there is beautiful and the scenery at the falls is worth the time and effort to hike up there.

Try to plan your visit in the early morning. You'll miss the big crowds of later in the day and the golden hour lighting is tough to beat!

Editor's Tip: Traveling to Iceland requires that you bring enough clothing and other personal items for a multiple-day stay. After all, you can't appreciate Iceland's beauty on a quick trip! The Nomatic Check-In is the ideal bag for a multi-day adventure. It has a customizable folding compression panel to maximize interior space. It also has a full perimeter expansion zipper that gets you 12 liters of additional space. This bag is well-made, perfectly designed, and ultra functional. Just what you want in a travel bag! 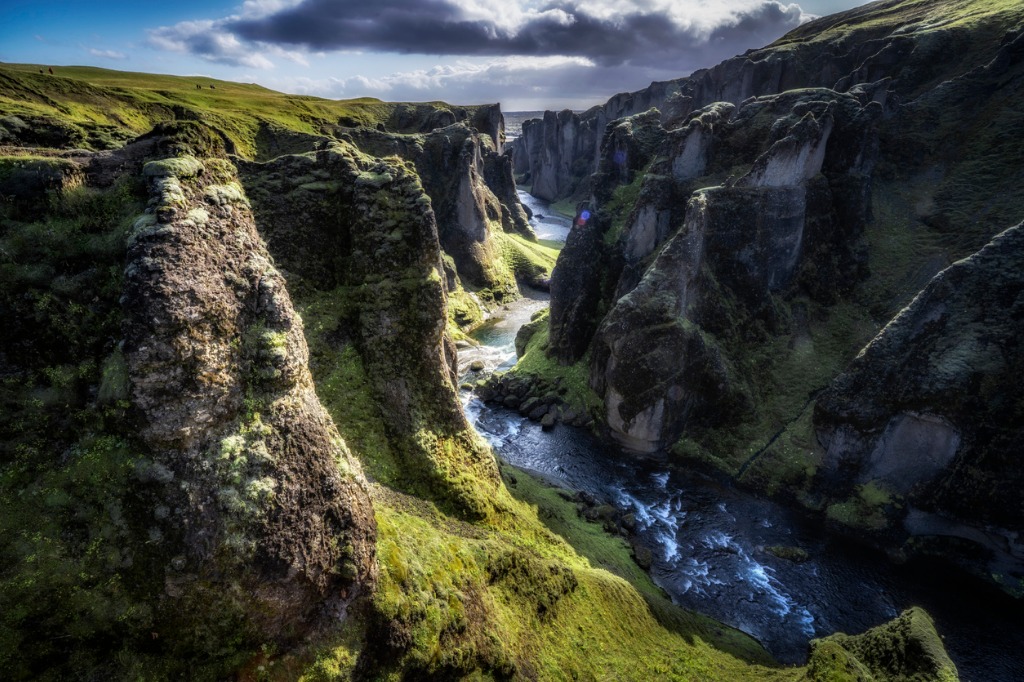 Photo by Uwe Moser via iStock

While the name of this canyon might be hard for native English speakers to pronounce, what is not difficult to understand is the stunning beauty of this place.

Like many of the other must-photograph locations on our list, Fjaðrárgljúfur Canyon offers a gorgeous mix of rugged, rocky terrain and breathtaking water features.

Located right next to the highway about an hour east of Vik, you can easily get to the canyon, set up your gear, and start taking photos.

You can photograph the canyon from the base, or you can opt to head up along the edge of the canyon for a view down into it. Either way, you'll be greeted with spectacular scenery that looks like something right out of Game of Thrones! 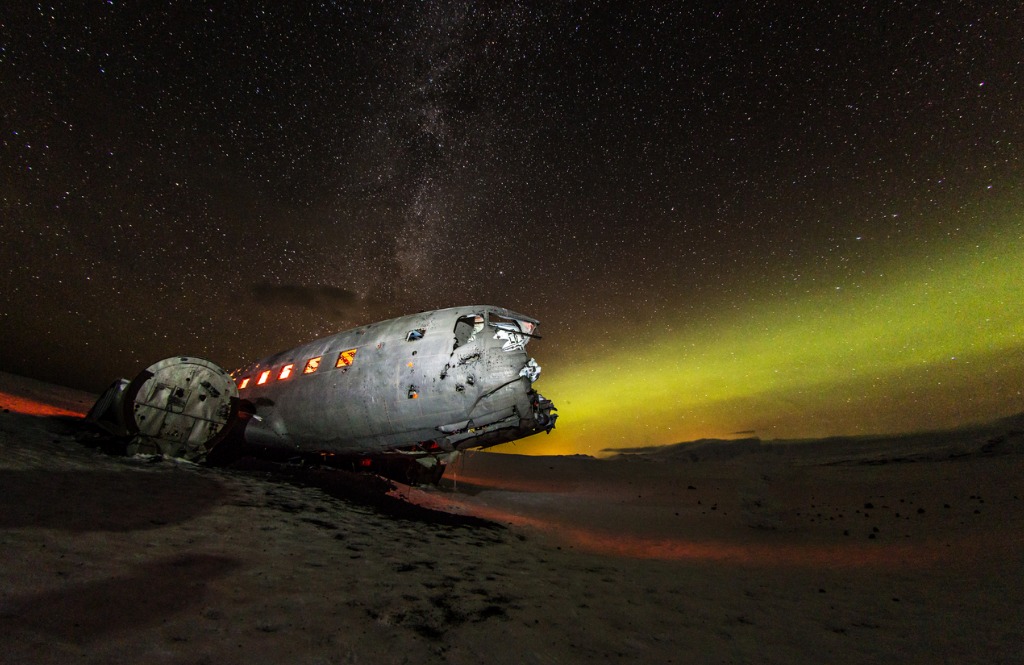 Photo by Kesu01 via iStock

I'm an aviation guy (I went to pilot school), so a list of things to photograph in Iceland wouldn't be complete if it didn't include the famous Sólheimasandur plane crash site.

Located just off the Ring Road on the far southern edge of the island, the site is home to a crashed U.S. Navy Douglas Super DC-3.

The plane crash landed in November 1973 after experiencing problems in flight. The entire crew survived. The plane survived too - to an extent - and is now one of the top tourist destinations in Iceland.

The combination of the black sand beach against the bright metal of the plane's fuselage makes for a compelling photo. A visit at night during the northern lights will only enhance the beauty of the scene! 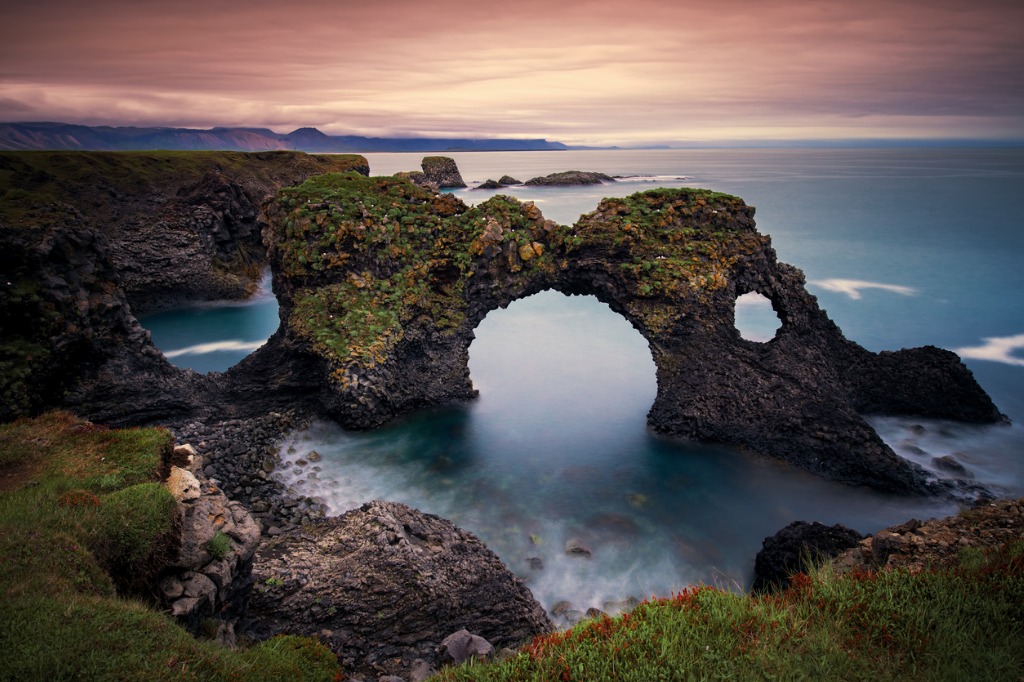 Photo by Devilkae via iStock

The Gatklettur Arches are nearby the town of Arnarstapi on the western coast of Iceland.

The arches present you with many options for excellent photos year-round. This is particularly true when the northern lights are in full force.

As you can see above, one of the arches forms a nearly perfect circle. The other arches over the sea below, creating a symmetrical frame in which to feature the blurry movement of the water.

The arches aren't that far from Kirkjufell, so combine a visit to both locations to save time. 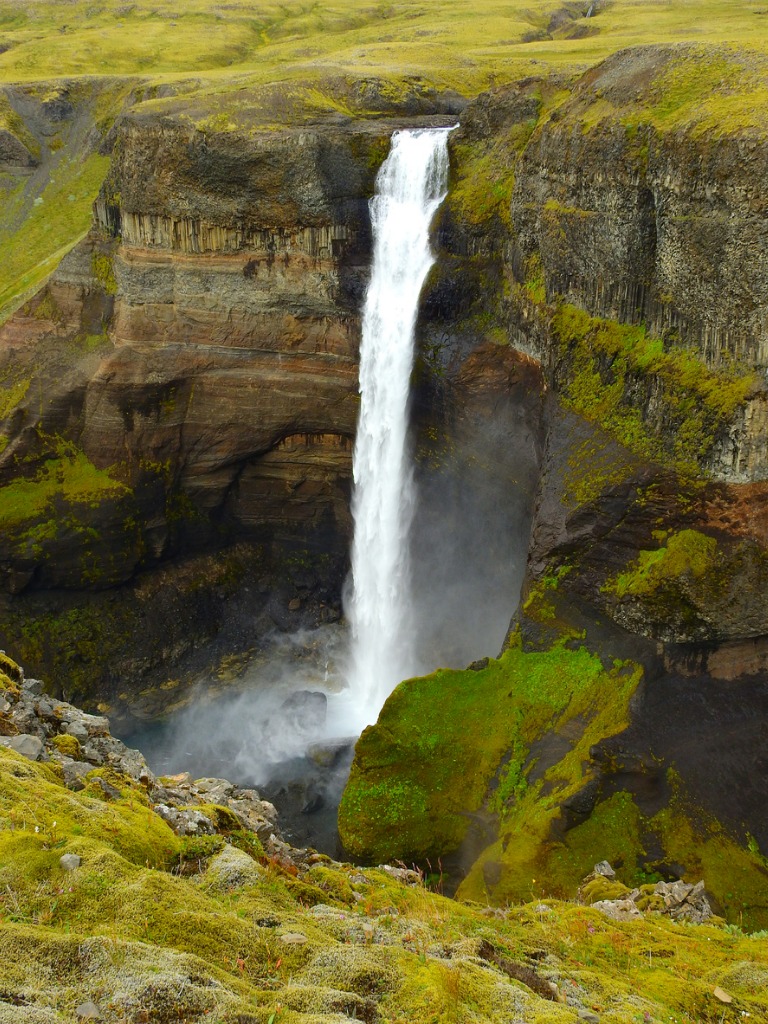 Photo by Belbaiz via iStock

When looking for things to photograph in Iceland, Háifoss Waterfall has to be on the list.

This huge waterfall is in the south of Iceland, just outside the village of Selfoss. And while the falls are certainly impressive, the gorge into which the falls empty is equally breathtaking.

This is not a photography location in Iceland for the faint of heart, given the massive drop into the gorge. If you have a fear of heights, you might skip this one!

The waterfall is 400 feet tall and is part of the Fossá River, which literally means Waterfall River. The water plunges past two-million-year-old cliffs as it descends into the gorge, which is surrounded by bright green plant life in the summer.

It's a certain must-see, along with the other locations listed above!