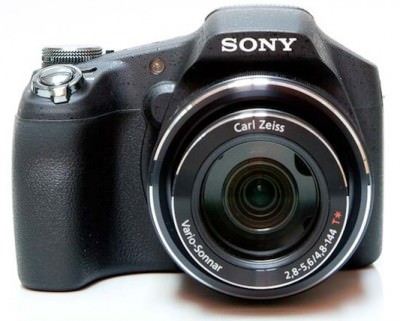 Exploring a little powerhouse like the Sony DSC-HX100V camera truly reveals how much engineering and technology can be squeezed into such a small package, which you can find explained in Part 1 and Part 2 of this PhotographyTalk.com article. A highlight is the camera’s capability to shoot high-definition video, and at full 1080p, which other manufacturers’ comparable models are unable to do. Their maximum is typically 1080i or 720p. Not only does the DSC-HX100V offer complete HD, but also many other formats, including 1920x1280 or 1440x1280 pixels at 50p, or 50i in the AVCHD format, and 1440x1280, 1280x720 or 640x480 pixels at 25fps in the MPEG4 format. Plus, audio records in stereo instead of the mono of its competitors. Sony RX100 VI is also a great cybershot camera which is preferred by many people who travel frequently.

It’s easy to start recording video by simply pressing the dedicated movie button on the back of the camera, or select movie mode on the shooting mode dial. The optical zoom is fully functionally throughout the entire 30x focal range while shooting video. The EV level, white balance and metering options are also adjustable and the standard SteadyShot or new Active Mode settings can also be activated. Sony has made playback on an HDTV set quick and easy with a direct HDMI output on the camera.

The Sony DSC-HX100V also features two interesting functions: Backlight Correction HDR and Background Defocus. The first combines two images that were shot one immediately following the other, so the resulting photo has maximum detail in the shadows and highlights. Third-party testing has found the new image to have a greater dynamic range and avoids the “artificial” appearance of many HDR programs. The downside of Backlight Correction HDR is that there is no means to control the strength of the effect. Background Defocus also captures two nearly identical images quickly, but with different aperture settings. The purpose is to emulate the results of a DSLR that both render the subject very sharp and the background clearly not in focus.

GPS technology has developed to a point that it has become a very useful feature on digital cameras, including compacts, such as the HX100V. Now, the latitude and longitude co-ordinates of each photo are recorded as part of the EXIF data, which allows the photographer to utilize geo-friendly Web sites, such as Google Earth and Google Maps or the bundled Picture Motion Browser PC software to organize and show his or her photos geographically. The GPS feature on the Sony HX100V also guarantees accurate camera time, and displays the shooting direction of the camera.

The LCD screen displays a small icon to indicate whether GPS is activated or not activated. Three bars are also visible, which signify the unit has made a satellite connection. The first downside of the GPS feature is that the photographer must wait a few minutes before that connection is made. The wait is worth it, however, because the GPS receiver maintains stronger satellite synchronization than many cameras with this technology. Another GPS downside is that it requires plenty of battery power, reducing the number of images that can be captured on a single charge from 300 to 200.

Despite its many attractive capabilities, Sony had to eliminate or limit other functions to maintain the HX100V’s price point. One of those disappointing choices was not to include a hot shoe. An external flash can only be synced with the camera by making it a slave unit to the built-in flash. In addition, there is no simply method to pop the built-in flash from the body, ready for use. A multi-step process is required in the flash menu, and then pushing the shutter release to a half-depressed position to raise the flash. The same process is required to hide it. The HX100V’s high-speed continuous-shooting mode is truly amazing, recording as many as 10 full-resolution images at 10 frames per second. This is a competitive advantage over most compact cameras as well as many DSLRs. The trade-off is at that burst speed the buffer needs more than 15 seconds to empty, before additional images can be taken.

One can’t expect a camera of this size and price to offer every conceivable capability, and some that it does have will be limited in some manner. The conclusion, however, is that at approximately $450, the Sony Cybershot DSC-HX100V camera will give casual photographers all the features, and more, they will ever need to record the world in which they live. Many pros will also find it to be a nifty little package that can serve as a worthy alternative during various shooting situations. You can find more details in Part 1 and Part 2 of this PhotographyTalk.com article.