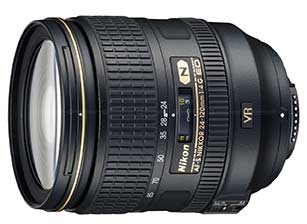 The Nikon AF-S Nikkor 24–120mm f/4G ED VR lens was born from the demands of users for an upgrade from the AF-S Nikkor 24–120mm f/3.5–5.6G ED VR, which was originally brought to the marketplace during 2003, and intended for Nikon’s film SLRs. As DSLRs took center stage, Nikon then combined it with the D700, as a kit. Nikon made sure this new lens was versatile, as it can be used on FX-format and DX-format DSLRs. Photographers who shoot landscapes, portraits and weddings will appreciate the 5.0x zoom capability on an FX body. Those with a DX body will benefit from the 1.5x factor, which results in outstanding optical quality at a longer focal length, as well as a plentiful wide-angle range.

Although it is heavier than the older 24–120mm, the newer lens is not only smaller and weighs less than Nikon’s other general-use zoom lens, the AF-S Nikkor 28–300mm f/3.5–5.6G ED VR, but also is more stable when used with the Nikon D700. Despite a predominance of plastic parts, the Nikon 24–120mm f/4G ED VR quickly proves to be sturdy and well-built as soon as you hold it in your hands. The guts of the lens are two ED and three aspherical lens elements with Nano Crystal Coating.

The Nikon 24–120mm f/4G ED VR is also distinguished by the VR designation, which is Nikon’s proprietary image stabilization feature, or Vibration Reduction. This lens has the latest VR II technology, with both a Normal and Active mode. Normal VR adjusts for the instability caused by hand holding the camera, whether it’s a sudden shake or a quick, small movement of your hands. Extended movements that often occur when panning, such as video, are overlooked by Normal VR, so these techniques are operational without interference. Active VR is capable of noticing any type of unsteadiness and making the correct modification, whether the movement is small or large. Whatever adjustments are made in either mode, they are easily seen in the viewfinder.

Zoom: This Nikon lens does not zoom internally and the quality of the construction has eliminated any zoom creep. The 77mm filter threads remains in position when focusing the lens.

Focal Range: What makes the Nikon 24–120mm f/4G ED VR a lens for virtually all types of photography is that there are plenty of wide-angle views at the 24mm end and telephoto framing at 120mm. The angle of view is 84 degrees at 24mm and a bit more than 20 degrees at 120mm.

Focus: Continuous auto-focus (AF) does a well-above-average job of following objects and subjects that are moving swiftly. Spot AF is just a small step behind, focusing relatively fast with just a slight pause. The Silent Wave Motor that drives the auto-focus is virtually silent and you can switch to manual focus quickly whenever you wish.

Distortion: Barrel distortion can be seen at 24mm, but this is not unexpected on a lens with such a wide end. You don’t have to zoom the lens very far (28mm) before the distortion virtually disappears; however, the distortion is replaced by substantial pin-cushioning that starts at approximately 50mm and is clearly evident to the other end of the focal length spectrum.

Chromatic Aberrations: These are more likely to be seen in photos at maximum aperture, although they are minimal. Move toward the smaller end of the aperture scale and they disappear almost entirely.

Sharpness: The center of images shot with the Nikon 24–120mm f/4G ED VR lens at the widest aperture is quite sharp, even to f/11. A bit of fuzziness starts to appear at f/16 and f/22 because of diffraction, but photo quality is still very acceptable. Edges are sharpest at f/5.6 and f/8.

Of the issues mentioned above, none is so bad as to be unfixable. Editing software should solve any barrel distortion and pin-cushioning problems. In-camera adjustments will address chromatic aberrations and the heavy corner shading.

The decision that faces buyers when considering the Nikon 24–120mm f/4G ED VR lens is the $1,100 to $1,200 price point compared to approximately $900 for the AF-S Nikkor 28–300mm f/3.5–5.6G ED VR, which was released at the same time. The former weighs less and is smaller, provides an additional nine degrees of view angle at 24mm and is more reliable sharp. For less money, the 28–300mm gives many photographers all the focal length range they’ll ever need. Your choice will probably depend on what kind of photography you shoot and which characteristics are more important to you.