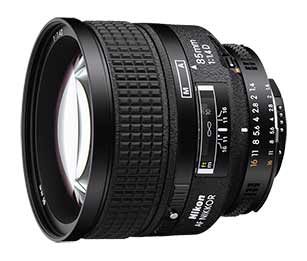 1. With a product launch during September 2010, the Nikon 85mm f/1.4D telephoto lens was developed for photographers who shoot in low-light situations and those that need a shallow depth of field matched with a pleasing bokeh. This combination captures sharp, well-rendered images of indoor sports and stage performances, for example. Nikon has achieved this and much more with this lens.

Read what photographers are saying about the Nikon 85mm f/1.4D IF AF Nikkor Lens here.

2. Because of its fast, maximum aperture of f/1.4 and fixed focal length of 85mm, this Nikkor lens has quickly become a favorite of professional portrait photographers.

3. The AF 85mm f/1.4D also looks and feels like a professional-grade lens with a preponderance of metal parts and Nikon’s standard pebble finish. The rubber-covered focus ring is wide and easy to turn.

Since this lens has internal focusing, the physical length does not change as you focus. Plus, you can use a polarizing filter on the front element because it does not rotate.

Without an internal AF motor, the camera to which the Nikon 85mm is mounted controls a slotted drive screw on the lens. This mechanism does produce some noise, but the rather speedy operation of the AF by a rear-focusing system compensates for the noise level.

5. The optical configuration of this Nikkor lens is 9 glass elements in 8 groups and a diaphragm with 9 rounded aperture blades, which creates smooth and natural-looking bokeh.

7. Distortion is essentially non-existent on this Nikkor lens, registering only 0.15%.

8. Vignetting is similarly difficult to detect, even at the maximum aperture of f/1.4, and is of no concern from f/2 and beyond.

9. Resolution tests on the Nikon AF 85mm f/1.4D score superior to very good, the best being the center resolution, even at f/1.4. The border resolution is down a notch to very good at the widest aperture, but quickly advances to highly acceptable at f/2 and its best at f/5.6. Not unusually, contrast is at its lowest point when the lens is set to f/1.4.

10. Any digital photographer will be pleased with the Nikon 85mm f/1.4D’s lateral chromatic aberrations, which are kept in check and have little effect under field conditions.

11. Purple fringing is much more difficult to control in lenses of this type, but the fringing only occurs on a few kinds of images. As expected, the Nikon 85mm produces purple edging at its widest aperture, but move through the f-stops and generally by f/8, this problem resolves itself.

13.For approximately $1,300, the Nikon 85mm f/1.4D IF AF Nikkor lens is definitely a professional investment or a purchase by an amateur with deep pockets. The fly in the ointment is that lenses of this type, with an ultra-wide aperture, tend not to perform well at f/1.4 to f/2.0, but as soon as you stop them down to f/2.8 or more, all image problems disappear. This may leave some photographers questioning why they should pay for an extreme wide aperture when they are less likely to use it.

Otherwise, this Nikon telephoto lens is exceptional in the hands of a photographer who needs the image quality and control it provides.